Internet dating has its drawbacks. Donna has been chatting with a wonderful man for weeks, but he doesn't seem to want to meet in person. She comes up with a plan to entice him out of his shyness. She'll wait in a hotel bar. He’ll approach her as though they were meeting "normally" and they'll see what happens next.

But her plan has a major flaw… 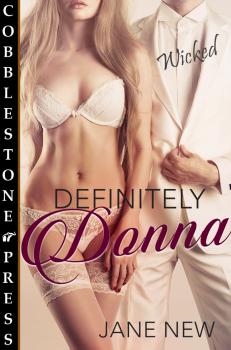 Internet dating has to be the most artificial thing ever invented.

Donna toyed with her glass. The wine was cold, clear, and pale gold in color—an excellent South Australian Sauvignon Blanc. Condensation had formed on the outside of the tall, delicate glass. With one fingertip, she traced a pattern of stripes.

Anything rather than think about the man she was supposed to be meeting.

Tall. Dark hair and green eyes. Loved sailing. Was self-employed in a business that involved a great deal of traveling, which brought him to her small, southern city regularly. His daughter and her family lived here, and he was considering moving to be near them. If he met the right woman, perhaps.

She was trying not to think about the possibility that she might be the right woman.

Weeks of messages and texts, interspersed with rare phone calls from busy airports, had led her to this point. Friday evening, after work, in the bar of a hotel near her office. Dressed in her usual work attire of low-heeled ankle boots, thick black tights, straight black skirt, a floral blouse and a light gray, wool jacket. She’d shampooed her hair this morning, and she knew it gleamed—the same color as the wine—straight to her shoulders. She’d taken it out of the clip she usually wore to work and brushed it until it shone before she left the office.

She had suggested this charade, and now she was paying the price.

“Let’s meet somewhere. I’ll sit at the bar. You can approach me, pretend we know nothing about each other,” she’d messaged. “Let’s make this as normal as possible.”

What had she been thinking? That it might entice him out of his shell, break the curse of weeks of almost meeting, then things falling apart at the last minute? Now she realized she had set herself up for disaster. He could see her and make his choice, but she had no way of knowing what he was like. This had been a lousy idea.

She would leave, text him later, tell him she’d changed her mind.

Finishing the last of the delicious wine, she gathered up her big red handbag and prepared to slide off her barstool.

“Is this seat taken?” His voice was deep, but not overly so. Precise. Commanding. The tone of a person used to giving instructions and being obeyed.

A little shiver passed through her.

Donna looked up at him. Tall, indeed. His hair a little lighter than his photo, but people always posted old photos, didn’t they? Her own was taken a couple of years ago, but she’d told him so when they had first made contact.

His eyes, although shadowed by the light above the bar, looked directly into hers. An unspoken communication passed between them, an invisible bond established. A silver chain, a silken thread. All in a fraction of a second.

He was better looking than in his photo, by a mile.

“Do you mind?” Even seated he was still taller than she was, and at five-seven, she wasn’t a short woman. But his profile had said six-one. He hadn’t lied, not about that, at least.

“Not at all.” She still clutched her bag awkwardly. “I was just leaving.”

“What a pity.” He returned her smile, his teeth white and even in his tanned face. “I was about to ask you what you were drinking.”

He ordered her drink, and then checked the wine list before ordering a pinot for himself.

“I guess that means you’ve decided to stay,” he replied.

The bartender set her drink before her. She sipped it, observing him over the rim of the glass.

“I... Yes, I thought I might,” Donna stammered. Never, not even in her most outrageous fantasies, had she thought he would be this hot. When they had been dishing it out—whatever it was—this man had acquired far more than his rightful ration. He seethed sexuality.

She wanted to drink in the sight of him. She wanted to imprint every detail of him—from his tousled hair to the tips of his polished, black leather shoes—on her mind forever. Instead, she forced herself to look away, and felt heat flush her face. She crossed her legs, shifted on her barstool, and then crossed her legs the other way.

And noticed he was watching. Her skirt had slipped a little too far up her thighs.