Mason Rune had a good life—wealthy parents, a college education, and a loving family. All was going well until tragedy struck. In the span of a month, he had suffered the death of his two uncles, his grandfather, and his father. Lost and confused, Mason finds solace in his father’s study. In this sanctuary, his life spirals out of control as he discovers his father’s diary stashed away. What he once believed to be true proves to be false. Trust is lost, and everything is in doubt. This is only the beginning of Mason’s troubles as the Aesir, a secret society, lurks in the shadows waiting for the perfect time to strike. They have but one mission, to release Demathia, a demon of unimaginable power. Once released, Demathia will destroy all who oppose it, enslave humanity, and remake the earth into a realm or pain and anguish. Only one person stands between Demathia, the Aesir, and world domination…Mason Rune.

Mason must discover the truth and accept who he is in order to battle the Aesir and defeat Demathia. 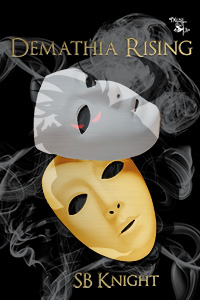 All of the Aesir members dropped to their knees and pressed their faces to the ground as the ground rumbled and shook. A bright red circle exploded around the fourth pillar and overlapped the other three circles. The air crackled with electricity. Shadows clawed up the chamber walls as howls and screams grew.

The leader raised both hands up in the air. “The four circles of the four elements bind together and hold the gateway of the realms open. Come forth and enter this world. Come forth and rule. Your servants call.”

The leader stumbled as a violent quake shook the chamber again. The ground heaved and bulged where the circles overlapped. Soil, rock, and stone exploded into the air, showering down on the kneeling Aesir. Darkness flooded the chamber, extinguishing the low light. A bright-blue flame erupted from the fissure.

A voice filled with primal rage and authority echoed throughout the chamber. “Who dares summon me?”

The leader’s arms fell. “Your loyal servants, Mistress. We bid you come forth and rule.”

A loud screech like fingernails down a chalkboard erupted from the fissure. The leader and members covered their ears and moaned.

“You sniveling sack of meat. You have the four elements, but you are missing one. I need a vessel to come out of my realm into yours.”

The leader fell to one knee. “Your vessel will be delivered soon, Mistress. Is there another we may sacrifice to you to atone for our misdeeds?”

The question was answered with a demonic laugh. “You know nothing of which you speak. Only one can be the fifth and my vessel. On the first new moon of the vessel’s thirty-third year, summon me. If you fail and summon me again, it will be your last.”

One of the shrouded members kneeling on the ground looked up and stared at the pulsating blue flame as it swayed inside the ripped-open earth. The Aesir member stood to full height and moved slightly with the motion of the flame. The body remained stiff, but her feet slid over the ground toward the crevice.

“Max, no! To your knees now,” the leader shouted.

Max continued her shambling walk toward the enticing blue flame. A hand extended from it. Elongated fingers of blue flame reached into the hood and caressed the hidden face.

Max screamed and shivered violently as the cloak burned to ash.

The blue flame engulfed Max’s body. “You belong to me now.”

Max’s screams intensified as the flame burned her skin from head to toes. The burned skin turned dark-blue and then black before it cracked and split. The burnt skin fell from her body in chunks, exposing blue muscles that shriveled and collapsed to dust. Bones charred black fell to pieces and drifted to the pile of what had once been her healthy body. All that remained was a blackened skull held by the blue finger.

“Let this be a lesson for you,” the voice announced.

The skull flew through the air and landed between the feet of the leader.

The blue flame flickered twice and then disappeared. The chamber was bathed in darkness until the leader clapped, and the fires in the sconces roared back to life. A horrified hush fell over the members as they turned and lifted their gazes to their leader. The silence lingered as the Aesir leader bent down and picked up the skull. The black, polished finish of the bone gleamed and reflected the firelight.

“You foolish girl, you knew the commands but neglected to follow them.” The leader held up the skull.

“Let this stand as a warning for each of you, should you step out of line. Now, go forth and bring me the fifth.”

Cheers and howls from the Aesir filled the chamber as the cloaked members marched through the catacombs and filed back into the alley. Cloaks were removed and draped over bare arms as the Aesir dispersed among the other pedestrians.