In the twilight realm of Daeva Shudra, there dwells an ancient race of demons. Once the most powerful beings on earth, the Daeva must hide in their underground city or be burned to ashes by the sun. The world above belongs to mortals now, inferior creatures with limited abilities for magic, easy prey for demonkind.

Between the two races comes Orziel, a half-breed struggling to survive the deadly schemes of his immortal kin. His only weapons are his vicious beauty and ruthless cunning. Otherwise, he is powerless and despised. But lack of power doesn't check Orziel's pride or ambition. All his life he's lied, seduced and betrayed to get whatever he's wanted, including his lover, the demon prince Asheru. When Empress Shebazael claims Asheru as her own, Orziel swears he'll do whatever it takes to take back what's his, regardless of the consequences. 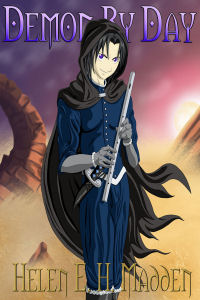 “You shouldn't be here.”
Orziel regarded his petulant lover with mild amusement. Asheru, a demon prince and nephew of his most hated enemy, sat at a marble dressing table running a brush through his silver hair. In the soft eldritch light emanating from a nearby lamp, the young demon's translucent skin glowed beneath his gossamer robe.
“I spent over an hour scaling the walls of your uncle's keep, and that's all you have to say to me?” Orziel replied.
Asheru sniffed. “You climbed the walls only because your sorceries are too weak to get you in here any other way.”
“Or perhaps I climbed the walls to show how much I desire you. How many other lovers would risk breaking their necks just to see you?” Orziel reclined against the window casement and pulled a silver flute from the folds of his doublet. He played a soft, seductive melody, letting the delicate notes spiral into the amethyst sky behind him. There was no sun or moon in the sky. In fact, there was no heavenly light at all. The underground realm of Daeva Shudra dwelled in endless twilight. Only the cool blue flames of eldritch fire pierced the darkness.
The sorcerous light of the bedchamber lamps flickered and danced as Orziel played. He basked in the glow and stretched to the full length of his lean, muscular body. His sole weapon was his beauty, the rapier-sharp physique of a rogue sheathed in doublet and breeches of gleaming blue velvet. Black boots, fashioned from the scaled hide of some netherworld beast, molded to his calves. His hands and face remained uncovered, revealing flesh as pale as Asheru's though not quite so translucent. Where Asheru's hair gleamed silver-white, Orziel's brooded darker than a cloud of night upon his head.
“If my uncle finds you here, he'll kill you.” Asheru spoke to his own reflection in the silvered glass, refusing to look at his suitor.
The music stopped. Orziel pocketed the flute with a sigh as he studied the lines of the prince's willowy body, clearly visible beneath the silk robe. “Valefar can't kill me. The empress has forbidden it. No one may kill a Daeva and live.”
“You're mortal, not Daeva!” the demon prince exclaimed, haughty anger flashing in his silver eyes.
“I'm half Daeva, and that's good enough for our beloved empress. As I recall, it was also good enough for you once.” Orziel abandoned the casement and strode across the room.
Asheru jumped up in alarm, but before he could flee, the half-demon caught him by the wrist and shoved him back against the dressing table. The hairbrush clattered to the floor as Orziel pressed his velvet-clad hips against Asheru's.
“I'll scream!” the prince threatened in a fierce whisper.
“Yes, you will scream,” Orziel purred. “You'll scream my name over and over again as I tear away your robe and throw you onto the bed. You'll scream for mercy as I spread your legs and impale you on my hardened sex, and then you'll scream for more as I ride you like a prize stallion rides a mare in heat.” He pressed his mouth against the young demon's, forcing his tongue between the youth's pale, shimmering lips.