Nick stared at the mini-CD. It gleamed under the streetlights. Only the dying American pilot could have slipped it into his pocket. . . .

After running to the scene of a plane crash in Abu Dhabi, Nick Chevalier stumbles across classified military secrets. And an unknown terrorist will stop at nothing to get them. As Nick investigates the cover-up behind the downed plane, he crosses paths with an agent from a covert espionage agency and makes the leap from high school senior to teen spy. But he realizes too late that he put more than his own life at risk—his mother and sister are also in danger. Does he have what it takes to outwit a terrorist who wants him dead and save the two people he loves? 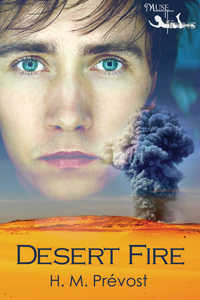 We stopped at a traffic light. The street was deserted, except for a car that pulled up behind us, its motor humming. The taxi driver fiddled with the dial on the radio.

The back door of the taxi suddenly swung open, and a fist slammed into my temple. Unable to work my arms or legs, I slumped onto the plastic-covered seat. Powerful arms hauled me to the side of the road. A burly man with his head covered in a black-embroidered scarf pulled the gibbering taxi driver out and shoved a wad of blue-coloured bills into his hand.

Panic hit me with the force of a lightning bolt. They want me because of what I know, what I saw. With my arms pinned to my sides, I couldn’t use my fists, so I lifted a foot and smashed it into my attacker’s shin. He howled and shoved me to the ground. The asphalt roasted my skin through my clothes. My cheek felt like it was flattened against a soldering iron.

A knee pressed into the small of my back, exerting a crushing pressure on my spine. On the other side of the taxi, two pairs of feet shuffled, one in sandals, the other in sports shoes. Moments later, the sandals disappeared, and the taxi drove off.

The masked man grabbed my hair, lifted my head, and I caught a glimpse of vicious brown eyes before he pulled a hood over me. He tightened it around my neck with a cord, and I gasped for air.

Rope wound about my wrists, tightened into a knot, and one of my assailants lifted me up. Flailing in empty air, I kicked whatever I could. With a metallic thunk, both my feet landed on the car.

Grunting with effort, I pushed as hard as I could. The man holding me lost his balance and tipped over. I tumbled on top of him. My right shoulder blade wrenched and a knifing pain radiated into my arm and back.

Tottering into a standing position, I tried to shake off the hood. It buried me in darkness. Buried me alive. I strained against the rope binding my wrists. It chaffed and cut. Where were the men?

A fist punched me in the gut. The blow sent me to the ground, gagging and coughing. Hands grabbed the crook of my arm to hoist me up. Muscled arms seized me in a stranglehold. A bicep bulged against my throat. I’ve still got some fight in me, you bastards. My father taught me to fight, and I was good, but I’d never been in the ring with a blindfold and both hands tied behind my back.

Once more, I raised my foot, aiming where I thought I’d find his kneecap.

The arm tightened, and I pictured a python squeezing a helpless animal in a slow and fatal embrace.

He spoke directly into my ear. “Stop resisting, or I’ll cut off the blood flow to your brain.”

He’d squeeze my carotid artery until my brain cells died. Some primitive instinct pushed me to keep fighting, but I overcame it. Trembling, shaking, I went down on my knees in submission.

I’d never felt so helpless, not even when enduring Dad’s frequent torments. My life was at the whim of strangers whose faces I hadn’t seen.

They manhandled me into the car, shoving me to the floor.

What were they saying? The blood rushed in my ears as I rested my forehead on the carpet. The car took off.

Both men sat in the back seat, so there was a third person at the wheel. The throbbing sensation in my right shoulder subsided.

I couldn’t form words. My tongue stuck to the roof of my mouth.

“If he doesn’t answer, break his fingers. One by one. Make him scream.”

A clammy palm closed around my little finger.

One of the men unzipped the pocket and groped for the disc. “Alhamdulillah!” he cried in triumph.

The rope cut into my wrists. More urgent chatter in Arabic.

Another powerful wave of fear ripped through me. Every piece of CNN footage I’d ever seen of hostages in the Middle East played in my mind. I didn’t want to die. I didn’t want my mother’s last image of me to be of a sword flashing, and my head being severed from my body.

They argued among themselves. Minutes passed. Tick, tick, tick. It was getting harder and harder to breathe. Every time I swallowed, the cord cut into my neck. Muscles cramped in my lower back.

One of the men made his voice low and menacing. “Listen. We paid off the taxi driver to keep quiet. And he will, because we have his plate number. Pakistanis are afraid of the police. They don’t want to be involved in a mess that could have them deported or jailed. Even if you find him again, he’ll deny he ever saw you.” He spoke more calmly than before, which took the edge off his accent. He no longer rolled his R’s. “The police won’t believe you either. Don’t go to them. Forget about the plane. Forget about the disc.”

The car stopped. Humid air rushed in as the door opened. Hands shoved me out. Head first, arms still tied behind my back, I hit the hit the ground and rolled down an incline. The hood suffocated me. My stomach threatened to heave up breakfast, and my head spun. The ligature dug into my Adam’s apple.

I rubbed my wrists together to loosen the bonds. Sweat dripped down my back and the sides of my face. Silence all around me. No hum of traffic. The rope slacked a bit, then a little more, and I yanked my right hand through the loop.

Loosening the cord around my neck, I pulled off the black hood. Wet hair plastered my skull, as if I’d just climbed out of a swimming pool. The t-shirt clung to my skin. Scanning the area, I realized I was in the desert in the middle of nowhere. And I mean nowhere.