Destined for Each Other (Wiccan Haus #22)

She’s caught between the para and human world…he’s always been an outcast. At the Wiccan Haus, they’ll find each other and paradise.

As a crossbreed good fairy, Bliss is tired of goodness, light, and everything that’s right. Talk about boring. Her human half demands a bad boy. Someone who’ll curl her hair and toes, while also cherishing her. In other words, the whole enchilada.

Enter Fallon. Tall, dark, handsome, and seriously dangerous. No, seriously. He’s a reaper. Trouble is, he’s started to covet human emotions. Longing. Lust. Love. He needs healing fast to get his head screwed on right and go back to the way he was.

Bliss doesn’t agree and is determined to show him another way. Sometimes you have to break all the rules to find your destiny.

Destined for Each Other (Wiccan Haus #22)

Deep in thought and worry, he stopped short of the elevators.

Bliss smiled so widely, she made two dimples. They drew him to her like metal to a magnet before he regained his good sense. He kept a respectable distance though got close enough to catch her fragrance. If the universe had been fair, he would have drowned in it and her warmth. “I didn’t expect you to still be down here. Did you have trouble finding the elevators?”

“Nope. I waited for you. Thought we’d ride up together and diss this place. I can picture us after we graduate our programs. We’ll get T-shirts that say I Survived the Wiccan Haus?.”

He laughed then sobered quickly. “Is it going to be that bad?” TGR hadn’t told him a thing. He simply ordered Fallon to pack and go through the portal. “Don’t they have a good success rate?”

“Haven’t a clue, but their guests are something. Thanks for saving me from Geoffrey. Admittedly, he was scared, but he gripped me so hard, he left bruises on my waist. And what about that gargoyle?” Her eyes widened. “What if he can’t shift either way ever again and is forever stuck between stone and flesh? Poor guy won’t fit in anywhere, like me.”

The elevator dinged, and the doors opened.

Fallon gestured her inside first.

She pulled in her luggage, leaned against the wall, and took him in. Slowly. Shamelessly. Seductively.

His rod shot to attention. Zero to erect in half a second. He shifted his weight, trying to hide his arousal.

She didn’t look away. Pink bloomed in her cheeks.

“I’m half good fairy, half human. My fae side, from my mom, is always worried about everyone’s happiness, never my own. My human side, from Dad, is selfish and wants to cut loose. You know, have a good time. I’m torn in two directions constantly, which brought me to the Wiccan Haus. I’m trying to keep both sides in harmony. Trust me, it hasn’t been easy. I can’t imagine what my parents were thinking when they hooked up, but they were in love so, bam, they made me. And I ended up with this.” She flipped her locks. “Might as well wear a scarlet C on my chest for crossbreed. I’ve tried dying my hair one color. Doesn’t work. Not even with L’Oréal, and it’s supposed to be the best.” She shrugged. “What are you, if you don’t mind me asking?”

He did but there wasn’t any way around the truth. “A reaper.”

He jabbed the lobby button. “I’ll go back down and wait until you’re on your floor then take—”

“Hold on.” She caressed his hand.

His legs went limp. Every other part of him turned harder than steel.

“You don’t have to get off the elevator.” She stroked his thumb. “So you’re a reaper, huh? That’s interesting.”

“Pooh on them.” She leaned into him. “Have they been mean to you?”

Blue flecks added color to her eyes. Her musk surrounded and enthralled. “Huh?”

“You know, were they rude and unkind, saying things they shouldn’t?” Compassion flooded her features, making her breathtaking. “That’s so wrong.” She rested her hand on his chest.

His inner heat shot up a thousand percent. The only sane thing was to back away. He edged closer. “I don’t mind.”

“That people have been cruel. Hell, I’m there to end their lives, take their souls. Many well before their time. Innocents who should have had long, full lives. I certainly never expected the welcome wagon.”

“But it hasn’t been your fault. It’s your job, and you’ve been hurt by your victims’ reactions.”

He wished she'd used a kinder word than victim. However, others had wounded him. More than she could have imagined or he wanted to get into. He shrugged. A juvenile response, but he couldn’t muster anything better.

Bliss stroked his bottom lip. Damn thing tingled so much he trembled.

She pressed against him. Her nipples poked his chest. Their hipbones touched. “I’m sorry for your pain. I want you to feel better.”

Any more stimulation from her and he’d come in his jeans. “What?”

“Shhh.” She slanted her mouth over his and drove her tongue deeply inside. 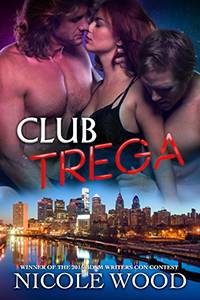