Devil of a Night (MM)

Steve's relationship with his lover, Carlos, has been on the rocks lately. For months now, they've been distant to each other, quick to argue, and Steven isn't quite sure what's come between them. A night spent clubbing together seemed just the ticket to patch things up and, sure enough, the first half of their evening went well.

But after leaving the club, Carlos must have taken a wrong turn somewhere because the two find themselves lost in the back roads of New Jersey, what's known as the Pine Barrens. Half-joking, Carlos tells Steven a local legend about a mysterious creature called the Jersey Devil.

Then they're run off the road by ... something, Steven can't say what. He feels it out there in the woods watching them. Waiting ... 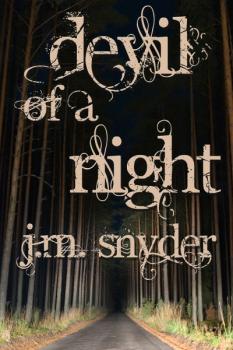 Devil of a Night (MM)

After a few minutes, the song drifted off and an announcer’s voice filled the airwaves, citing the current temperature and the Yankees’ final scores. Softly, Carlos admitted, “Maybe we’re a little off course.”

“I thought we might be,” Steven said, but Carlos’s hand was warm in his and he didn’t feel like arguing right now. “You said we were where? The Pine Barrens?”

Carlos nodded. “Ever heard of the Jersey Devil?”

“I mean like the Jersey Devil.” Carlos stared at the road ahead and thought for a moment. Steven knew him well enough to know he was warming up to a story, and he waited while Carlos gathered his thoughts together.

When he couldn’t wait any longer, Steven prompted, “It’s not the real devil, you know that, right?”

“No, it’s the Jersey Devil,” Carlos said. He squeezed Steven’s fingers and smiled. “Legend has it that years and years ago --”

“You mean back when we were in high school?” Steven offered.

Carlos laughed and raised Steven’s hand to his lips to kiss his knuckles. “Funny. You’re being bad.”

Carlos nodded. “I do. I love your wicked ways.”

“Long ago there was this lady.” Carlos’s eyes grew distant as he recalled the story. “Mrs. Leeds. She had a shitload of children, like fourteen or fifteen, or something like that. And she was so tired of taking care of them all, feeding them and having them --”

“She should’ve kept her legs closed,” Steven said. “Easiest form of birth control there is.”

Carlos gave him a wink. “But some people just like fucking all the time. You do.”

Laughing, Steven reached over and cupped Carlos’s crotch through his jeans. Carlos thrust into Steven’s hand, his eyes slipping shut briefly. “Watch the road,” Steven admonished, but he was thrilled to find that, despite whatever tension there might be between them, his boyfriend still hardened at his touch.

Carlos slapped his hand away. “Then stop touching me.” But the smile on his face stayed, and when Steven tried to pull his hand back, Carlos held it tight. “Can I tell you this story or what?”

“Go ahead,” Steven said, resting his hand high up on Carlos’s thigh. He didn’t really care about the story, but he liked the sound of his boyfriend’s voice and the way it filled the night around them. Maybe if they kept talking, they would work things out between them. “This lady had a lot of kids ...”

“And she was sick of them,” Carlos continued, “so when she got pregnant again, she cursed the unborn child to Satan. Nine months later when the child was born, on a dark and stormy night --”

“Trust me. It was dark and stormy.” Carlos glanced over as if daring him to interrupt again. Steven shook his head, a faint grin on his face, and Carlos turned back to the road. “So this new kid, he was hideous, with cloven hooves and pointy horns, and a tail like a whip. It was --”

“Am I telling this story?”

Steven snickered. Carlos threw him a warning look. “Don’t interrupt me again, mister. As my daddy used to say, don’t make me pull this car over.”

“And do what?” Steven teased.

Despite the closed look on Carlos’s face, a muscle in his jaw twitched, telling Steven he was trying hard not to grin. “I’ll pull your britches down and whip you.”

Steven’s eyes went wide, and he gripped Carlos’s thigh with both hands. “You promise?”

Exasperated, Carlos sighed. “Can I tell my story?”

Steven shrank into his seat, chastised, but Carlos caught one hand and pulled it back into his lap. “Yes, it was a devil, because she cursed it to hell, remember? She took one look at the child and fainted dead away. And before anyone could do or say anything at all, the child flew up the chimney and disappeared into the night. Ever since then, it’s haunted these very woods, waylaying travelers and preying on the innocent.” Taking a deep breath, he added, “There. I’m finished.”

Even though he knew better, a chill ran down Steven’s spine. “We should be safe then,” he said, grinning past his unease, “because there’s nothing innocent about either of us.” His hand strayed to Carlos’s crotch again, stroking the thick erection confined in his jeans, and he hoped Carlos got his point.

Apparently he did. Turning toward Steven, he leaned over and kissed the corner of Steven’s mouth, his lips warm and damp. Steven closed his eyes and squeezed the thickness beneath his hand gently, eliciting a slight moan from his lover as the car veered to the right. Opening one eye, Steven saw the bare road stretch away beyond the windshield, and he ran a hand along Carlos’s chest, pushing him up. “Hey,” he warned.

Carlos kissed him again. “We’re the only ones on the road,” he murmured, easing his foot off the gas. The car started to slow down as Carlos headed for the shoulder. “Once we stop, we can --”

Something suddenly leaped in front of their car.

At first glance, it looked tall and dark, like someone stepping out of the woods right into the middle of the road. Steven’s heart quickened in his chest and his breath caught as the headlights glared off the thing in the road. Blinded, he threw his hands in front of his face, bracing for impact. “Carlos!”

His lover slammed on the brakes with both feet. The car bucked beneath them as it swerved off the road.

He twisted the steering wheel hard and the car jumped off the road to skid along the gravel shoulder. Steven covered his face as they ran into the low underbrush—branches broke against the windshield, and dead leaves crumpled around them with a loud, crackling sound that drowned out the radio and the rest of the world. The squeal of the tires burned in Steven’s ears and the seat belt bit into his chest as it locked. One bright thought flashed through his mind -- at least he was kissing you, Steve; maybe there’s still something between you two yet -- before everything went still and silent and black.