Lloyd Lasky is a seasoned operative for the Whitlock Detective Agency in Denver that often infiltrates outlaw gangs in order to thwart stagecoach robberies. When he’s assigned to infiltrate the Bonner Gang based in Devil’s Paw, Arizona Territory, he’s unprepared for the personal ambush his heart suffers over gang member Frank Metty.

Taking up sex with Frank, Lloyd convinces himself that doing so is part of his job in solidifying his place in the gang and learning of their plans. But as time passes, Lloyd not only starts to care for the younger man, but jealousy also rears its ugly head when it becomes clear the gang leader, Merle Bonner, also has a sexual claim on Frank.

When the line between self-indulgence and detective work blurs to the point where Lloyd considers not only breaking agency rules but breaking the law, will he be able to ignore his ever-growing sexual desires and successfully complete his dangerous mission? 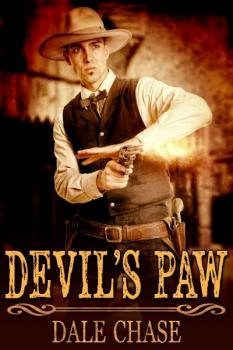 I have a quick eye, as a detective must, picking up on things others might miss. Merle Bonner rode straight in the saddle, walking his horse like he was on parade, which here, in who-cares Devil’s Paw, I suppose he was. A clean-shaven younger fellow rode beside him, more relaxed, not caring so much, while the two behind were laughing at something they’d spotted. I looked over to see a drunk relieving himself in the street. All this I took in while appearing to merely glance about the street, and as they moved on, I did, too.

The four passed Day’s Saloon to stop further down at Evergreen’s Saloon. Once they went inside, I followed. Evergreen’s was smaller than Day’s and had no piano or banjo man, just the bar to one side and some tables opposite. A couple of worn bar girls plied the customers.

I wandered to the far end of the bar and got a whiskey, which I sipped as I glanced at Bonner in the mirror. With hat pushed back, the face in the prison picture was gone; in its place, a rougher version, likely twenty-five, though he looked thirty, as that’s what prison does to a man. He wasn’t bad looking, sort of ordinary, like he could be a cowpoke who’s been on the trail too long.

The younger fellow who had ridden beside him took off his hat to reveal a head of copper-colored hair. It was a riot of curls, and when he laughed, his face lit up to where he fairly glowed. For a few seconds, before I caught myself, I glowed a bit, too.

The men were well along in their drinking when the two jokers who rode in with Bonner joined a poker game. Bonner then headed out back, likely to the privy, at which I moved in on the copper kid.

“Howdy,” I said, and he returned the greeting. “Where’s a good place to eat around here? I’m new in town.”

“Ain’t no good place,” he replied, “but Molly’s will do for a passable beefsteak.”

His eyes were as blue as the sky, and he was so handsome he was near pretty. As a result, I was stiff in my pants. “Thanks. I’ll give it a try. Any work around?”

“Depends on what you do.”

“Well, I can ride and shoot, have punched cattle, but don’t particularly cotton to it. Come over from New Mexico, Silver City to be exact. Had some trouble and had to leave quick, know what I mean?”

He grinned. “That I do. Name’s Frank Metty. Yours?”

He gave a nod, eyes on mine a tad longer than necessary, and in those couple seconds, I knew he was up for something. Wouldn’t be the first time I’d led with my dick. Quickest way to gain a man’s confidence is doing the deed, and no employer could object to a man taking pleasure in his work.