Dewi and the Seeds of Doom

When Dewi is clobbered by a falling rat, the nosy Welsh dragon snoops his way into a challenging predicament. Helped by a toad with a passion for chemical wart cures, Dewi discovers that a megalomaniac baron is secretly breeding mutant corn at an unfriendly castle. To thwart the genetically modified-corn baron’s sickening plan, he must use moxie and firepower in a series of catastrophe-skirting capers. 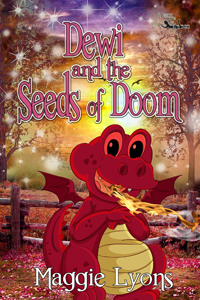 Dewi and the Seeds of Doom

Dewi rummaged through the papers on the writing desk. If the baron had written a plan, the mystery could be solved. His search was interrupted by the sound of boots clonking on the stone floor of the entrance hall. The boots and whoever was wearing them were coming toward the library. Dewi looked around the room. There was no place to hide. There were no handy cabinets to sneak behind, and the writing desk was open on the sides. If the dragon crouched under it, he’d be as easy to spot as a cherry in a white bowl. If he hid behind the drapes, they’d bulge in all directions like a sack full of monkeys. The young symbol of Welsh pride wished a big hole would suck him up, but the library floor was solid stone, and he didn’t have a jackhammer.

The boots were now thudding right outside the library door. Heavens! Dewi looked up. The ceiling had no handy hole in it, but it was supported by rows of strong rafters. In a flash he flew up to a dark corner and rooted himself on one of them. Down below, the boots entered the room. The fellow attached to them looked like the person in the portraits on the walls. He thud-thudded his way to the writing desk, tossed some papers around, and yelled, “Peegor, get in here. Peegor…Where is that pea-brained good-for-nothing? He’s never around when I need him. PEEGOR.”

The door to the rat room opened and Peegor dragged himself out. “You called, master?”

“Yes, you useless, snot-nosed bag of rat pellets, I can’t find copies of the contract. Did you finish making them?”

Peegor’s bulging eyes didn’t blink as he answered very slowly, “Most gracious baron, your humble servant licks your spurs, but...”

“What’s the matter, Peegor? Is your dungeon too warm and your straw mattress too comfy for you to get up until half the day has gone?” A very nasty laugh crawled through the gap in the baron’s rotten teeth.

“With all respect, Your Magnificent Doomliness, I spent the last half hour trying to catch a large toad that was loose in the castle. Before that I had to feed the rats and water the greenhouse. Before that I groomed your horse, cleaned your boots, and cooked your breakfast. Before that—”

“That’s enough, Peegor. And what was that story about a toad?”

“That sounds like a whopping big fib, Peegor.” The baron boxed Peegor’s ear and knocked him over.

A Cajun in Colorado
Charlie Richards
In Shelf
$4.99
Tweets by
sirenbookstrand