According to ancient First Ones (Fey) lore, “the hunter of the wolf” is the divine mate of the Immortal Fey Queen. Their soul bond brings the Living Goddess to life and peace rules the lands. Twin Flames shall reign supreme, a utopia of unconditional love and acceptance.

Delphian Immortals don’t exist. Then one horrific moment and an innocent vow set into motion events that ring around the world for tens of thousands of years.

Self-exiled Immortal Fey Princess Tarrinaysa D’Orian knew finding her Twin Flame in the wilds of this new land wasn’t possible. Delphian Immortals didn’t exist and yet, there one stood before her. “Within your blood lies the birth of races” her grandmother taught. She was about to get her heart’s desire.

As the Delphian Prince, he was her mate. If that was true, then why the fear and uncertainty? Can these two divine creatures of myth and legend find equal ground to come together as one? Will they continually search for what they think they want, when their Soul’s only desire is each other? 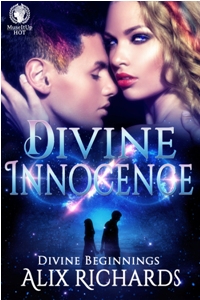 It wasn’t until her fangs fully lengthened that he realized what she was about to do.

“No—” He tried to get out, turning his face away, but was too weak.

“I promised Shining Star and Night Wolf no harm would ever come to their children, Wolf Hunter,” the entity confessed, Tarrinaysa nowhere in the being he saw now. “I take my vows seriously. You shall live and you will fulfill your destiny of this I vow as the Ancient Goddess Tarrynaysa,the infinite spirit of Life, Beginning and Ending.”

Once more he tried to speak, but no sound came out. His heart slowed to a level he’d never achieved voluntarily. His lungs functioned, but didn’t inflate. Wolf Hunter wanted to close his eyes and shut out what he knew Tarrinaysa, or whoever this was, was about to do. He couldn’t, his vision cleared and refused to heed his commands.

The same wrist he watched her bite into for Kange she did again for him. There was no blemish from the first assault on the pearlescent skin.

She clenched her fingers and a ruby essence gushed from the rip. Wolf Hunter tried to tilt his head away from the stream flowing with ease from the deity’s wrist. He didn’t want it; bleeding out would halt the confusion inside him. He would rather die.

A pair of hands gripped either side of his head. His father, Night Wolf ceased his attempts to avoid the sustenance from the goddess before them.

The warm liquid slid down his throat, as if unseen hands assisted its action. The holes in his chest sealed, the bones, muscles, and tendons knitted together at a speed he hadn’t known possible. Heat spread rapidly through his frame and pulsed to a temperature he knew was not conceivable. Fire raced along veins then nerve endings, and he gasped.

What’s happening to me? None of his previous healings had been like this.

He couldn’t control the motions as his entire body seized. Just as his eyes rolled back and jaw went slack, his heart thundered faster and faster, and then ceased. Air hissed from his lips and everything stopped.

He heard the cries of his mother and sisters, as if he were dead, but couldn’t reassure them he lived. He was trapped within his body, unable to respond. The entity continued to squeeze her life essence into his mouth as her glowing hand moved over the rips in his chest, healing him.

“Cease your fighting, hunter of the wolf. The healing must finish before you fight.”

The voice was one he hadn’t heard before. It wasn’t his, nor a family members’, but a male. By the accent, he sounded more like the female who spoke about his destiny. She called herself the Ancient Goddess Tarrynaysa.

“Who are you?” he finally asked the essence from within his mind.

“I am you, the counter to the Ancient Goddess Tarrynaysa, the Ancient God Teran, her twin and consort. Heed my advice, hunter of the wolf, for ’tis your body we share. An established balance must be attained betwixt us. I will awaken when the time comes, and we shall be one in unity. Until then, you must grow and become accustomed to what it is you are. Breathe, prince of the Delphian people, the first of your kind. I will speak with you when the moment arrives. Be well, Brother.”

Though the presence was still there, it fell silent. It slipped to the background behind his Soul. Startled, his eyes flew open and jaw widened.

Above him he saw the vision of the female who saved Kange’s life, and then did whatever it was to him. Running Elk, Lesharo, and his father had an odd look about them. As he pushed himself into a seated position, they each scrambled back. Fear etched in their expressions and horror reflected in their pale eyes.

Tarrinaysa’s lips tilted at the corners, but she still wasn’t the Tarrinaysa he’d grown up with. This deity was the one he heard whispers of, the Living Goddess. Who she was, her other being. The entity he’d seen many times when danger threatened the village. This was the creature he sensed lurking beneath the gentleness he knew to be his family’s mentor.

Her face was eternal. The intense power she controlled he felt from the male who spoke within him. Did he house a deity like she did?

Or was it a pain induced figment of his imagination?

Tarrinaysa watched Wolf Hunter sit up, his wounds healed. The only sign of the punctures was dried blood.

Her breath hissed through clenched teeth when his gaze slammed into hers.

The pale opal hue gone, replaced with a silvery fire opal tone. The giddy sensation that traveled through her body at his expression reminded her of the looks she had seen on other males when they were trained on a female. She swallowed.

The entity she had called forth to assist in healing the two fatally wounded warriors, one after another, purred in contentment at his proximity. Startled at the feelings washing over her, she pushed the deity behind the door she kept locked. Berating herself for letting the female loose, Tarrinaysa inhaled to settle what clamored there.

“You can only fight me so long, Fey Princess. Soon I shall be free of the constraints that bind me. When the day arrives, I will have my say and my commands heeded. You are not strong enough to keep me locked away forever. None is more than I, nor will I be stopped when Teran is released.”

She clenched her hands and gritted her teeth. The oddness settling over her at the words the Ancient Goddess proclaimed, forced her to acknowledge she needed to be very cautious when calling on her to help again.

Stiffening, she pulled on her own energy reserves, refusing to accept the assistance the goddess wished to give. Tarrinaysa learned that even within the same body another would demand payment for help. Nothing was given for free.