Alonso, however, doesn't mix work with pleasure—no matter how much Dulcinea gets under his skin. He would like nothing more than to spend endless nights of pleasure with her. However, he's not one to wait in line. And the line for Dulcinea's bed is varied and never-ending. 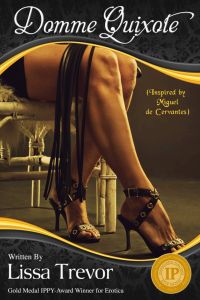 Dulcinea was surprised to see her chief of security standing directly opposite her at the far end of the room. Was there something wrong? Alonso, whose name appropriately meant ready for battle, hated these intimate shows. He thought they were an insurance liability, and a lawsuit waiting to happen. She wasn’t worried. She had very good lawyers, and even better contacts in the local police and judicial systems.

Fantasizing about him was her go to scenario when she needed to prepare for an erotic scene. Alonso could be a modern-day pirate, with his eye patch and the long scar on his cheek. She had never seen him undressed, but in her fantasy he was battle scarred all over his magnificent body. He towered over Rico and Matteo, and even made her feel tiny. Alonso was also adamant about not mixing business with pleasure. And since Dulcinea had more than enough pleasure at every turn, she'd reluctantly stopped her pursuit of him. His background in the military and some secret government agency that she wasn't even sure existed, made him more valuable to her as a protector than a plaything.

Dulcinea frowned. He knew the rules, though. Nothing should get in the way of the audience’s complete immersion in the fantasy. Alonso, however, wasn't dressed for the playroom, wearing his usual black T-shirt and cargo pants instead of 17th Century Spanish garb. She wasn't surprised that he was glaring directly at her. How he could see her through the sliver of curtain, though, she'd never know.

Alonso didn't like how isolated she was during her shows; he had warned her about her attitude. He said that all it would take was one man overpowering her to destroy the illusion that she wasn't vulnerable. He had no faith in her abilities, or her sense of self-preservation. Rico and Matteo were capable of handling any guest intent on violence in the playroom. Truthfully, the guest wouldn't dare behave badly for fear of banishment. And Club Chivalry only catered to those who had passed a rigorous lifestyle test, and signed waivers allowing her carte blanche to do whatever she pleased with their bodies.

Ignoring the demand in Alonso's eyes, Dulcinea noted that, at least the playroom guards were in costume. They were dressed as bandits, complete with scimitars that were not props.