All Blyth wants is a nice relaxing getaway from her wreck of a life and ass of an ex. What she gets is a double booked condo with the playboy from Hell. First she walks in on him in the middle of very loud sex. Then she gets caught looking. And God help her, she's turned on. Unfortunatley, he's on to her and he calls her on it.

Anthony is rude, infuriating and definitely a player. Blyth knows she's in for an anything but relaxing vacation if she's going to have to share quarters with the likes of him. What Blyth isn't counting on is being sucked into his vortex of sex or the fact that he seems to be able to push her past boundaries she didn't even know she had. Somewhere in the midst of his parade of girls and huge ego is a real man. Who has real hurt. And the real part of him is calling to her. First with temptation, then with sex and then something more. She's just not sure if she's strong enough to answer.

Full of steamy interludes from the first page, Double Booked was a great read. A tease on the surface, Blyth and Anthony's story proved to be so much more. Their interaction was tense with an edge of naughty that I thoroughly enjoyed. If you are looking for a steamy escape that offers a little more, you won't be disappointed.

"Blyth," he said with a nod, walking past me as if he were wearing a three piece suit instead of nothing. "I didn't know you were awake."

"You like what you see?" he snickered, turning from me and pouring two mugs of coffee.

"I umI wasn't expecting to see anything!" I snipped, trying to draw up some anger and failing miserably.

"Sorry. Like I said, I didn't know you were up." He turned, impressive cock swinging gently with his motion. Though, flaccid, it was nothing to sneer at, that was for sure.

"I'm up here," he chuckled and handed me the second cup of coffee. I took it silently. A bit confused. A bit embarrassed. A lot turned on. Apparently, it had been way too long since I had been laid.

"Sorry. I just haven't seen one-" I bit back the words. Damn, damn, damn. Why did I insist on speaking aloud?

"This big? This nice?" His green eyes twinkled with humor as he relaxed against the counter. Completely at home in his nakedness.

"So you and this guy. What happened with him?" He sipped his coffee. Black. Nothing added.

I busied myself locating the sugar and milk. Doctoring my coffee. Anything not to stare at his dick. Though I wanted to. "We broke up," I mumbled, putting the sugar away. " I went to pick up my SUV. He had borrowed it to help a friend move. I thought he was out with the boys. When I opened the back to see if I had left a book back there, he was in there. With one of my friends. Sheila. He was fucking Sheila."

"I'm sorry. That's a shitty way to have things end."

I nodded. Sipped my coffee and turned to say something. Something intelligent like, thank you. But my eyes went right back to his crotch as if tugged by an invisible string. Instead, I said, quite briskly, "Where is June?"

"I sent her home. We're not a couple. Just dating. A bit of fun while I scope out this job and find a place to live."

I was staring openly now. Under my gaze, his cock jumped. Twitched. Grew and lengthened. He was getting off on me looking. I was getting off on his getting off. I shook my head to clear it and cleared my throat. "Sorry. I guess naked men do me in all of the sudden." I tried to cover with a casual laugh. It was more of a nervous trill.

My breath froze when he said softly. "Blyth, would you like to watch me?"

I nearly, stupidly asked, watch you what? I didn't have to. As he said it, his large fist slid along the shaft of his growing cock. He stroked hard as the plump head went from a blushing pink to near purple. His eyes never left mine.

I swallowed. Felt my eyes widen. My heart stutter. I was mesmerized by the sight of his big hand on his big cock as he stroked. Slowly. Giving me time to answer. To change my mind, maybe.

"Yes," I whispered, though I was mortified at my answer. "Yes, I would." 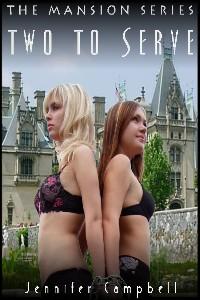 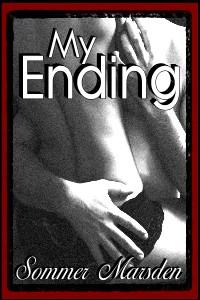 My Ending
Sommer Marsden
In Shelf
$0.99