She’s been on her own for a long time, closing her heart to love, because love equals pain. As a sex therapist, she needs to assume a dominant roll with her clients, but as a woman, she’s all submissive.

In Steve and Jeff she’s found the Doms who can take her to every sexual height she’s ever imagined and beyond. But now they want more, and she’s not sure she can give it. It takes one hot night at Inferno with these two men to let her know there’s more to life than just physical release.

Inferno was hopping. Friday nights were always busy, but it seemed even livelier than usual. The low pulse of music, the hum of sexual tension thick enough to bite into.

I laid a five on the counter and took my drink from the bartender. Cranberry and seltzer. I needed to keep myself alert for what I knew was to come.

Weaving my way through the throng of dancers, I sat myself at a table in the middle of the action to await my men. Once a month I came here to meet up with Steve and Jeff.

As a professional sex therapist, I spent my days with men, women, and couples who came to me to with all their hang-ups. Through our sessions, I taught them to let go. To let their inhibitions flee and their natural tendencies take over, leading them into a world of domination and submission.

Because of my role as their teacher, I needed to assume a dominant position when my true tendencies tended toward the submissive. The stronger the Dom, the better for me. Jeff and Steve were exactly what I needed to thrive. I just wished we could get together more than once a month.

Maybe tonight, after we were done, I would ask them if we could meet every two weeks. I needed this. Needed them. My day-to-day life was too stress-filled. Dealing with the dysfunctional was too taxing for me to only have one night a month to relax and let go. To give my true self free rein.

I sipped my drink and watched the dancers gyrate against each other, letting the deep beat of the music and the lust coursing through the air relax my stiffened muscles and prepare me for the excitement to come.

Leather and lace—mostly leather—was the apparel of choice for the patrons of Inferno. There were men covered in black, women barely covered, and a few submissives who wore nothing at all. Black, red, and pink were the favored colors, although a few true, one-hundred-percent submissives, who played the virginal role, wore white.

I had no use for virgins. I came here to get fucked, and the harder—the nastier—the better.

I learned of this private club during a convention. Obtaining entrance took a while, since it was by referral only. The patrons underwent screening for STDs, and membership was a hefty sum each year. But it had all been worth it. Now it was my playground when I needed release.

My pussy pulsed to the beat of the music, and I breathed deep the scent of arousal, which floated on the atmosphere like a soft, sensual cloud. Body heat warmed the air, and I tingled, imagining what my men would want of me tonight.

Jeff, Steve, and I met by chance here, one night a little over a year ago. My date for the evening hadn’t shown, and the pair picked me up. Though it usually took me a while to warm up and trust anyone enough to head to one of the private rooms with them, these two had been different. They were dominant in a way I seldom saw. Confident yet caring. Demanding yet at the same time gentle.

I still knew little about them, since we met only for sex, not socializing in the normal sense of the word. But what I did know was enough. They knew how to please my deepest, darkest needs. They knew how to make me relinquish all control to them, and the reward was beyond any expectation I’d ever had.

Maybe I was a bit in love with them—if for no other reason than I knew there would never be another man, or men, who could satisfy me sexually the way they did. Love was out of the question, though, because what we did here was fuck, plain and simple.

I took another sip of my drink and glanced around the club, trying to locate them among the crowd. The lighting too dim to see far, I turned back to the dance floor and waited. They’d never failed to show. I didn’t worry they wouldn’t.

Perhaps plain and simple wasn’t the best way to describe our relationship. There was nothing simple about it. But I couldn’t love them—I didn’t know anything about them other than they were roommates, had college degrees, made enough money to afford club membership, and had been buddies since elementary school. Besides, I didn’t do love. The heart was closed for business and had been for a very long time.

My body didn’t care. I knew enough. I wanted to know more, but I wouldn’t risk losing what we had by pressuring them. I had no idea what lifestyle they led outside the club. For all I knew, they could be...

I shrugged. I had no idea. I was fairly sure they weren’t married. I supposed that would have to be enough. And from what went on between the two of them in the private rooms, I knew they weren’t gay or bisexual. They touched me and fucked me, bound me and whipped me, but they never laid a hand on each other. Not that I would have minded if they did, but these two were as straight as arrows and as dominant as anyone I’d ever known.

“Don’t move,” was whispered in my ear an instant before black silk covered my eyes, blocking out the sights of the club.

I recognized the voice as Jeff’s and stiffened, but in excitement, not fear. This was new. They’d never blindfolded me before. Usually they came, we had a drink while they told me in detail what they’d previously decided to do to me, and then we headed for one of the private rooms in the back of the club.

“Stand up,” Jeff said, his deep voice vibrating through me, making the tiny sparks of arousal dancing along my skin grow and streak over my body.

I stood, and thick, long, callused fingers laced through mine. Steve’s hand. I liked to imagine he was a steel worker. He was built for it, all bulging muscles and rough hands that made my flesh come alive when he stroked me. Jeff was taller, leaner, though his body still rippled with muscles, his abs the yummiest I’ve ever had the pleasure to lick and nibble. He had a runner’s body. I fancied him to win gold medals in triathlons. His hands were smoother, though not soft. Never soft. 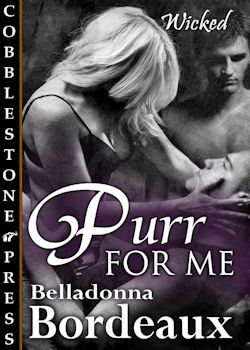 Purr for Me
Belladonna Bordeaux
In Shelf
$2.99