Executive Jeff Wallace has lusted after Evan Hawthorne since the moment his new employee first stepped into his office for a job interview. Evan is almost ten years Jeff's junior, fresh out of grad school, and one of the best salesmen in the office. Jeff thinks he's hot as hell and as luck would have it, he knows Evan is just as interested.

The only problem? There's a sticky little paragraph in the employee handbook that keeps Jeff from doing anything more than fantasizing about his new employee. The clause that states, in plain English, that managers and their immediate employees cannot fraternize. They can't get together, not even outside the office, just because Jeff's the boss.

Jeff has pleaded with his own supervisor, Kirk Morris, to change the rules. Why shouldn't he? Kirk owns the damn company and spends most of his time bonking Jeff's secretary. But it's a no go ... until Jeff finds himself working late one evening with no one left in the office but Evan, who decides to take matters into his own hands regardless of what the employee manual might say.

Rainbow Reviews: 4.5 out of 5.
"A quick sexy read, as a very hot Evan and a very frustrated Jeff finally explode into bending the rules ... Snyder does an excellent job of character development with these two men, who are clearly good at their jobs, but are caught in an untenable situation."

A thin blush creeps into Evan's cheeks -- the girls kid him about me, I know they do. He's so damn obvious, doesn't even try to hide the fact that he wants to get with me. I like to think I'm not that transparent. I pretend I don't hear Amber's comments or see Charity's grin when Evan hurries into my office a dozen times a day just to ask me this, that, or the other thing. I try to ignore the accidental touches, his hand on my shoulder, my arm, my wrist, the way he stands so close beside me or taps my shoe with his foot beneath the table. I try not to let him see exactly what his coy smiles and flirty looks do to me. As much as I might encourage it, I can't tell him I want him just as badly as he seems to want me. He can't ever know that.

Not as long as I'm turning in his hours, isn't that what Kirk said? Never mind that we're all salaried. I wonder if that argument would fly, but already suspect I know the answer. Of course not.

I take the papers from Evan and hand them back to Charity. "Make the damn copies," I tell her, angry. "Mr. Morris is waiting."

"Let him wait," she mutters, but it's a hollow argument. With an annoyed sigh, she flounces away, heading for the copier.

"I could've done it for you," Evan tells me.

I turn to find him beside me -- when did that happen? He's stepped around his desk and now leans against the edge of Charity's, so close that one hand brushes over mine where it's tucked into the pocket of my pants. He stares at me, eyes wide, lips slightly parted. I know he's doing this on purpose, looking this fine, looking like this, like he's more than willing to do anything I want him to do, and he's not sure what it might be but he's hoping it involves my pants down around my ankles and my thick length in his mouth, his hands on my ass.

His tongue peeks out to wet his upper lip in what I tell myself is an unconscious gesture. It has to be. He practically purrs when he says, "I don't mind."

"It's okay." I force a tight smile. Of course he doesn't mind -- he wants me, I can feel his need radiating from every pore, and it frustrates the hell out of me that I can't have him. I shouldn't even flirt back but I can't help it.

I can't meet his eyes so I look past him, out the window, and extract my hand from my pocket. It brushes over his, then I take his elbow gently. The mere touch, even through the shirt he wears, threatens to burn my skin. Still tucked away in its own pocket, my other hand pushes against the sudden erection that fills the front of my pants. "Come on. Mr. Morris wants an update."

Evan gathers together the spreadsheets he's been pouring over all day. My hand stays on his elbow, not so much to guide him any more but to keep him in place. Beside me, where he belongs. But my hand falls away when he knocks his pen to the floor and bends over to retrieve it. Then I have to clench my fingers into a fist as I stare at him, ass in the air, every nerve in my body itching to reach out and trace the curved flesh hidden beneath his taut pants. That's a deliberate move, I know it is. He wants me to touch him. I can almost feel his desire coming off from him, like the heat off a small sun.

Because I'm not sure I'm strong enough to not touch him, I look away. "Evan," I sigh, my voice low. We're relatively alone at the moment -- Amber in the restroom, Charity by the copier, the rest of the staff probably already in the boardroom. Kirk nowhere in sight.

"I'm coming." Still bent over, he flashes me a quick grin over his shoulder.

At that smile, my breath catches in my throat. Me too. Damn.

The Baumgartners Plus One
Selena Kitt
In Shelf
$3.99 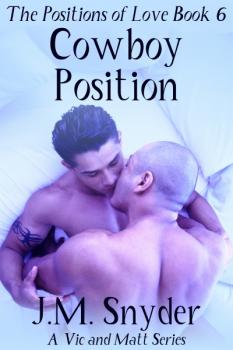