The birth of a child is a time for joy and celebration. For Sam and Reba, it is a time for concern and worry. Concern for what could be and worry for what lurks in the shadows. They both know Reba’s baby, Christian, is special. But Drago waits in the darkness, and he, also, knows how special the child is. He knows what the child’s birth means. Now Drago stalks them, waiting for his moment to strike and claim Christian for his own evil purposes. As he unleashes his sinister plan, Sam and Reba fight to survive and keep their newborn out of his clutches.

Chased by a group of would-be vampires manipulated by Drago, Sam and Reba are forced to abandon their home and find sanctuary in once forgotten locations. But they are not alone in this fight as family and friends arrive. Will it be enough?

Life will be lost, blood will be spilled, painful memories, and emotions will torment minds…all part of Drago’s revenge. 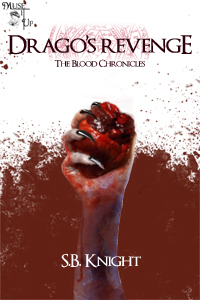 The black-cloaked figure wove through the hopeful patrons lined up in front of Club Flatliners. The lights grew brighter, the music louder as each step drew the specter closer to the entrance.

The bouncers held up their hands. “Where you think you going?”

The form stopped. The black abyss within the hood turned to each of them. “I have special business with the owner; now step aside.”

A growl emanated from the shrouded form. Two gray hands pushed the hood back until a face was exposed.

Feet scrambled back as the bouncer’s eyes doubled in size. The gray hands pulled the hood back into place as the figure stepped through the door and glided through the crowded club with ease. Multi-colored strobe lights flashed from all angles. Black lights shone in the corners as people danced and mingled on the dance floor. The cloak flowed as the figure moved to a back table occupied by three men and two women; they looked up from their glasses. Their smiles exposed elongated canines extending to their bottom lips as they held their drinks high and turned them up. The red liquid ran from the corners of their mouths and trailed over their chins.

The figure stopped at the edge of the table and regarded them. “Who owns this establishment?”

A man dressed in black, with long black hair, black eyeliner, red lips, and a pale complexion lowered his glass and studied the figure for a moment. “Who wants to know?”

“I have a proposition for that person…or group.”

“We are not a group; we’re a coven,” added a lithe man with skin untouched by the sun. Tattoos ran up both arms and disappeared under his shirt. He wore his blood-red hair tied back. The piercings in his ears, nose, and mouth reflected the light in the room.

The cloak turned, but the black opening of the hood concealed everything within. “Excuse my mistake. I have a proposition for your…coven.” Unseen eyes regarded each face in turn. “Who here is interested in making a large sum of money?”

Apex sat back in his chair and sipped his drink. The others at the table turned to him and waited.

“I don’t know about this one, Apex,” replied the plain-looking man on his left. His janitor’s uniform stretched tight over his expanding midsection.

Apex looked to his right. “What do you think, Drevin?”

“How much money are we talking about?”

The figure leaned on the table. “More than you can make in your entire life, plus some.”

Apex pushed out the chair in front of him with his foot. “What do you want us to do for this ridiculously large sum?”

The cloak covered the chair as the figure sat. “There are two objectives, really, but if you are intelligent enough, you can handle both at one time. First, there is a baby being born soon who belongs to me. You will go to the hospital and bring the child to me safe and unharmed. Second, the child will be with the mother and her lover. The woman has caused me a great deal of aggravation. You may have your fun with her, but as for her lover, kill him.”

The man in the janitor’s uniform sat back. “Apex, this is crazy. We can’t do this. It’s kidnapping a freaking kid, man.”

Apex hung his head and rubbed his chin as he thought about the offer. He shook it in a lazy motion. “I don’t know about this one, my hooded friend.”

“What are you talking about, Apex? I say we do it; I mean, think of the money, just for a fast grab-and-go,” Drevin added.

Apex looked up at the figure across from him and shook his head. “Nope, I don’t think so, my friend.”

The black void of the hood turned between Apex and Drevin. An arm shot out; cold, gray fingers latched around Apex’s throat.

“Let go of me, you freak!” He punched at the arm as the others pushed away from the table.

A harsh voice leaked from the darkness of the hood. “Drevin, you are the new leader of this little coven. You will answer to me if you want your money and perhaps even your life.”

Four fingernails rammed into Apex’s throat but stopped midway through. Apex thrashed his feet against the floor as blood flooded down his throat, filling his lungs. His lips moved, forming words, and a gurgling sound leaked between the red bubbles gathering around his mouth. The hand released, and Apex’s lifeless body fell across the table. The visitor reached out and jerked the janitor over the table.

“Wait man, wait. Listen, I work at the hospital. I can help.”

“Perhaps you can, but if you cross me again, you will know the value of your life.”

The figure released him and sat down again. Two pictures slid across the tabletop and stopped in front of Drevin. “These are the two I mentioned before. Reba Jones is the woman, and the man’s name is Sam Dean. I warn you, Reba is a never-ending frustration. And be wary of Sam. He is more than what he seems. I recommend you kill him quickly and be done with it. The woman… Well, I want details.”

“And the child?” Drevin asked as he looked at the pictures.

“You make sure not one hair on the child’s head is out of place. It is special and of great value to me.”

Drevin tilted his head. “What’s so special about this kid?”

The cloaked figure stood. “That is of no concern to you. Just make sure the child reaches me unharmed.”