Everything they need is right next door...

Lydia has a crush on her neighbor, and though she’s not the type to make the first move, she manages to find the courage to knock on his door. Her timing couldn’t be better. Diego needs her more than she could have imagined.

Diego’s muse has left him, has fled along with his ex and his baby daughter. Unable to draw, he’s let his life go by, barely noticing the inspiration just next door. When Lydia comes knocking, he may find more than just his lost muse... 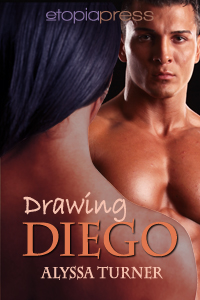 “Would you like to come in for some tea? My grandmother’s own blend—all the way from Bombay.”

He shook his head, just as Lydia knew he would. “Gracias, no. I got work.”

Lydia gave him a warm empathetic smile, the one that seemed to cross her lips every time they spoke, and she hoped for another in return. “I find that hard to believe,” she said, though she’d wondered what he would do without his muse. Their apartment’s walls used to be covered in the woman’s image—his apartment now.

Lydia hadn’t meant to eavesdrop on them every night, but the sheetrock was so thin, and Diego was so loud. The arguments were mostly in Spanish, but she could tell the two were on the brink. When she bumped into Marisol in the hall with their toddler on one hip and a different man’s arm wrapped around the other, it was clear she wasn’t coming back. Diego had been at work that day, or looking for some, and it had taken all of Lydia’s willpower not to spit at her feet.

Later that night there wasn’t any yelling. The sounds coming from the other side of her headboard where quite different: reckless thumping, glass breaking and a haunting sob that shouldn’t come from any man as proud as Diego. Lydia’s trip the next day to empty her trash found the cans crowded with his cherished sketches. No more Marisol, no more family.

“Well, I won’t keep you,” she said with quick breath.

He nodded, and took the two steps back to his apartment.

“Let me know if you need anything.” The words were out of her mouth before she could think.

He turned back with a quizzical look then tossed a silent nod her way once more.

Behind her closed her door, Lydia rolled her eyes. Need anything? Why don’t you just throw your panties at him?