1868, Freewill, Wyoming One town—Two couples—Four stories of hope, secrets, and passion…. Cody Blackheart, Sheriff John Avery, Vivienne Medina and Kate LeMasters all imagine a better world, a home where cultural differences and hidden truths won’t haunt them. But secrets and forbidden desires, when coupled with the self-interests of others, could destroy their dreams. Freewill Wyoming welcomes everyone who rolls into town. For four lonely people, it offers a chance to face their dreams, deceptions, and deepest desires, but can the good people in town look beyond what their eyes tell them and embrace a changing world, or will greed and prejudice win out over love? 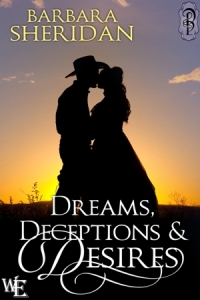 Cody turned onto his side, propped himself up on one elbow. “Just where do you go running off to anyway?”

To hide her discomfort, she turned her attention to straightening her bodice. “Visiting friends. Do I ask what you do when you take off on your little jaunts, like the one you’re returning from?”

Vivienne caressed his cheek. “I was out by the Gaines place paying my respects and seeing how they’re all getting on over that way.”

When they got back in the wagon and started toward town, she glanced over at her friend. It had been a pleasant surprise to see Cody’s rare smile and have him tease her. She thought he might tell her he’d finally succumbed to the charms of one of the many Shoshone maidens who were captivated by his rugged handsomeness and brooding sensuality. But seeing him now, as he so often was—withdrawn and slightly worried—put that notion to rest.

You’re a fine one to take stock of your friend’s loneliness when you’re every bit alone as he is, she chided herself. Still, he had the one advantage she lacked. Should he choose to pursue a romantic relationship, his past was an open book. He would never run the risk of shaming the one he loved with untold secrets.

After a time, Vivienne poked his arm. “So when are you going to find yourself some respectable, unsullied woman and let me throw you the biggest wedding celebration Wyoming has ever seen?”

“Right after I do the same for you?”

“I gave up the silly notion of settling down. I told you that the day you suggested I come out here.”

“That you did, Viv.” Cody gave her a saucy wink. “I imagine the women back East are lining up at the railroad depots to come fling themselves at my feet. So, once they start getting here, we’ll see.”

Vivienne laughed. “I’ll hold you to that.”

A Hunted Darkness
Zenina Masters
In Shelf
$2.99
Tweets by
sirenbookstrand