In a time when legends ruled ~

Deep in the heart of the Kelljek Mountains the Wolf People of Elnorn follow the ways of Odin – living and dying by the sword.

An untried warrior king must find truth in the darkness ~

Gararic – warrior and ruler wages war against the dark arts of the Black Witch, Dianaria and finds he must battle for more than just his people’s freedom. Will he find the truth he seeks on the sweet taste of her lips or will treachery destroy him and his people?

To be set free, one only needs to dream ~

A Dreamwalker by birth, Dianaria knows her fate and her future lies with the warrior king. Can love conquer the shadows of betrayal and hate? 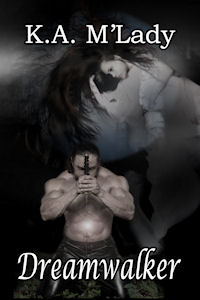 Lightning and thunder danced through the sky in a symmetrical glow, roaring through the cliffs. Gararic hurried up narrow winding paths of loose shale. It would take him a morning’s time in good weather to get up the path to the Perch. With the storm riding the edge of the sky, he needed to be there sooner and by the looks of the storm clouds, their darkening, heavy weight would not hold for long.

As lightning continued to arc across the sky, illuminating his way in intervals, each step grew more precarious as the small stones beneath his feet crumbled and the incline grew steeper. Halfway up the rocky path, the heavens opened up, unleashing the storm in all its fury, pelting Gararic with sleet and rain and soaking through his garments within moments.

Thor’s Hammer! He quickened his pace, all the while keeping the opening to the cave in sight. In a flash of light bright enough to warm the heavens, a shadow appeared in the opening of the cave.

He paused to watch the light dance around the mountain, giving him an excellent view of the cave’s opening. Staring in disbelief, he cursed Dianaria freely. “Witch! I swear by Odin’s blood, if you have brought this storm to torment me, I will kill you with my bare hands.” His roar echoed off the mountain.

Is that not your wish?

Startled, Gararic turned on the trail, certain he would find her on the path beside him. But the path he climbed was empty. No one followed up the winding rocky pathway. No one could be seen in the valley below.

He reached for the hilt of his sword, certain the devil’s army was on his trail. When he looked back to the opening of the cave, it too was empty. He stood silent on the path; the icy rain sluiced down upon him, staring at the empty opening of the cave in disbelief.

“What do you know of what I wish, Witch?”

The wind silently whispered her seductive reply. Come and tell me, Gararic, Leader of the Chenia River Clan. Leader of the Wolf People of Elnorn. There are many things to know this night.

Chills of desire flowed over Gararic; her soft words danced over his body. “I’ll not barter with a dead woman!” He tightened his grip on his sword, angered at his body’s response to her.

Are you so sure? Your father was not so quick to turn me away. Her voice was sultry as a moonlit night.

Gararic cursed under his breath. An image of her in all her naked beauty, alone in the creek with winter surrounding her, instantly filled his mind. Cursing himself for a fool, he tried to let his anger rule him and turned his thoughts to his father’s death. He tried to let his rage turn to molten lava and spread through his veins, knowing it was the one thing that would keep her from affecting him.

She had killed his father. She sought to kill his people. Yet even now, she wished to barter with him for his soul. If he wished to be the victor of this battle, he could not let his baser needs affect him. She would use her womanly wiles against him if she could. And that he could not allow if he wished to live.

Amazed at her audacity, he vowed he would defeat her. He would see who was more cunning; the Witch, or the warrior. Aye, he would play her game. But it was a game that he was certain she would never win.

Bounding up the path, his anger fueling his every step, Gararic hastily made his way up the remaining length of the mountain through the snow, ice, and rain. By the time he finally reached the entrance, there was no sign of Dianaria, the cave appearing as dark as his mood.

“Too afraid to face me, I see?” He wiped the rain from his face and wrung it from the length of his sable hair.

The back of the cave burst into a brilliant red flame. Gararic jumped back, drawing his sword before him. The fire died down to a single flame. He was able to see the shadow of a woman reflected on the wall of the cave. Next to the fire stood the Witch, in all her dark glory.

At first he was unsure if she was real or another image, this time from a waking dream. His eyes narrowed, taking in the voluptuous figure before him. With her back to him, besides her lush curves, he could see the rich fall of her waist-length black hair.

She wore no cloak, and through the length and thickness of her hair he could see the glorious stretch of her legs, encased in boots to her knees. He recalled the visions from his dreams, and wondered absently if she ever wore clothes. Her feminine laughter startled him from his reverie.

“Do you intend to stand in the cold all night, warrior?” Her voice was soft and sweet as a gently flowing brook.

Bedded by the Viking Warlord (MF)
Georgia Fox
In Shelf
$2.99
Tweets by
sirenbookstrand