Drinker with a Writing Problem (MF)

They say write drunk, edit sober ... or get someone else to edit for you.

From the imagination of Nickie Jamison, these four short stories span different genres, but they all have one thing in common -- hot lust and delicious romance.

Travel to a New York brownstone in “The Sorcerer’s Assistant” as a magical detective gets more than he bargained for while hunting a mischievous spirit.

”Saving Grace” is a high seas adventure full of pirates and passion.

And the view in the bedroom is pretty good, too, in the contemporary romance, “Penthouse.” 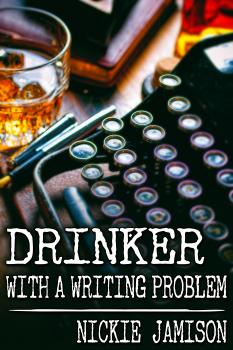 Drinker with a Writing Problem (MF)

Grace screamed viciously as the cold spray of seawater slapped against her cheek. Her body pitched sideways as a hard dark shoulder knocked the breath from her lungs, hoisted her off her feet, and hauled her back from the ship’s railing.

She sucked in air that tasted of salt and stank of unwashed men. “How dare you throw my wedding dress overboard,” Grace raged, balling her hands into fists and slamming them into the muscular back of the black sailor, aptly called Strong Jonny. “I will have you hanged for this, you damnable pirate.”

Labor-roughened fingers gripped her chin, forcing her to look up from the Captain’s black knee high leather boots with their gold buckles and the tight-fitting crotch of his dark brown breeches, into his face. Payne was no eye-sore, auburn locks tied at the nape of his neck, devilish black eyes fringed with long dark lashes, broad nose, and full sensual lips. Several days’ worth of coppery beard growth covered his square jaw. He wore a dress shirt with the sleeves ripped away and the muscles of his bare arms rippled beneath salt and sun-darkened skin. “Privateer, m’lady, and the gold this cargo’ll bring, I can buy you a hundred new dresses.” He smiled wickedly.

Grace’s mouth went dry and heat nestled in her belly. “My father did not hire you for this,” she hissed through clenched teeth.

“He didn’t hire me not to either.” Payne’s hot fingers released their grip on her face. “Lock her in my cabin, Jonny.”

“Abigail! Frederick!” Grace yelled her servants’ names at the top of her lungs, her fists once again pounding uselessly on the large sailor’s back.

“Don’t think dey gonna help you none, Miss Grace,” Jonny said as he carried her across the deck and down the three wooden steps to the Captain’s cabin. Lifting her from his shoulder, the large man deposited her in a heap on the floor and left, locking the door with a brass key from the heavy ring he kept at his belt.

Grace slumped on the wooden floor, the cold skirt of her seawater drenched dress clinging to her stockinged legs. “Payne,” she screamed as she removed one shoe and hurled it at the closed door. “You’ll suffer for this.” The other shoe banged against the wood. She stood, unbuttoning the pearls that held her white stomacher to her ruined blue satin gown and then peeled them both off. Loosing her stays, she flung them amongst the heap of salt-stained silk on the floor. Her wet petticoat was followed closely by her white stockings and garters.

She rummaged through the chest at the end of the Captain’s bed looking for something clean to cover her nakedness. Her fingers closed around the folds of a white cotton shirt and she slipped it around her, fastening the ivory buttons. The cloth swallowed her petite frame and the hem brushed just above her knees. She rolled the cuffs of the too long sleeves up over her forearms.

The oblong mirror mounted to the wall caught Grace’s eye. Her towheaded reflection looked a disaster. Half of her hair had come lose from the silver comb she used to pin it away from her face. She tried to tame her damp, knotted locks with her fingers, but it was no use. Grace growled, removing the comb and tossing it amongst the heap of her clothes.

She gazed at the ruined pile of silk and tears pricked the corners of her eyes and she swiped at them with her fingertips. The horror of watching her wedding dress sink beneath the dark ocean twisted in her gut. Enraged anew, Grace grabbed the Captain’s spyglass from its place on the shelf and threw it at the mirror. She missed and it ricocheted off of the wall and rolled beneath the bed.

“Two can play at this game.” She pounded her fist on the closed door and screamed at anyone who might be listening.

The cabin porthole groaned against the pressure of her hand as she propped it open. Grace seized a few of the Captain’s shirts and a pair of breeches from the open chest and tossed them out. The sea breeze caught the clothes and they billowed before floating down into the water below. She let fly anything she could find, a pair of boots, a hat, and a black waistcoat with mother-of-pearl buttons, books, and papers from The Captain’s desk. She opened a cabinet, seeking more things to throw from the porthole and Grace’s breath hitched in her throat.