When New York socialite Carole “C.J.” VanDemont loses the uncle with whom she went adventuring, life looks bleak and dull. Then an ad sends her to Arizona to visit La Riata guest ranch and experience wilderness adventures with guide and rancher Cameron Greenway.

In Cam she finds everything she imagined and more. He puts a whole new twist on adventure for her until she becomes helplessly addicted to his brand of excitement. Must and can she return to the staid life awaiting her? 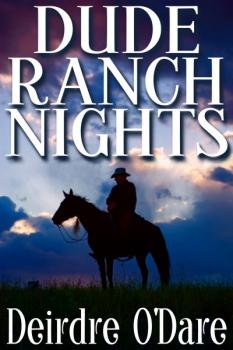 C.J seemed to realize there was no way to hide her distress. “I guess I’m more out of shape than I realized.” She looked up at Cam with a mocking smile, no trace of coyness now. “My legs feel like over-steamed noodles. If I let go of the saddle I’m afraid I’ll fall on my derriere!”

“We can’t have that. Here, lean on me.” He slipped an arm around her and she leaned with no reluctance. He steadied her a few steps to a seat on a large log, wedged between an Arizona Ash tree and a huge pink boulder. “Sit easy for a few minutes. I’ll take care of Josie.”

That done, he went back to Curly and took a parcel out of each saddle bag. With a flourish, he spread a blanket on the grass. Then he undid the other bundle and soon had a veritable feast set out for the two of them. She managed to get up and hobble the few steps to sink onto the nearest side of the blanket.

“Oh, my goodness! This is the sort of picnic one might expect in Central Park on a summer holiday, not in the wilderness of Arizona.”

“We may be out in the wilds but we don’t have to forego all of life’s finer things. Help yourself, my dear.”

She did. Between them, they made short work of the thick sandwiches, mixed fruit, crisp fried chicken, and delicate cream-filled pastries for dessert. There was even a bit of wine, a nice dry rose, and then a thermos of coffee.

“This is not what one ordinarily expects when you’re supposed to be roughing it, but I can’t find it in me to complain.” She tilted her face up to the warmth of the midday sun, shutting her eyes. “I could almost fall asleep now.”

“I think a brief nap is allowed,” Cam replied.

C.J. jumped. His voice came from a spot much closer than she expected. He had shifted until his shoulder almost touched hers. She snapped her head around to face him and instantly regretted that move. It put her face mere inches from his. His eyes were brighter blue than the sky, full of amusement and something hotter, fiercer. For a moment she felt like a rabbit pinned by the gaze of a rapacious hawk.

“There’s a bit of the cream filling on your lip.” He reached out and trailed a fingertip across her lower lip in the lightest of wiping strokes. Acting on a sudden impulse, she parted her lips enough to touch his finger with her tongue. He drew his hand back, bringing the finger to his own lips where he licked across the tip. “Ah, I do enjoy my sweets.”

A shiver of expectation rippled through her body. The building heat she felt came from within, not from the warming rays of the spring sunshine. She’d been celibate on purpose for some time, wearied of casual, meaningless couplings with overgrown boys who cared little for her pleasure and less for her feelings. Had she ever enjoyed a real man? Perhaps not. But this man was as real as they came…

She’d been brutally honest when she told her brother no man except her uncle had ever challenged her. None had even come close. However, Cameron Greenway challenged her in every possible way. From the moment she had gazed at his photograph in the magazine, she’d been anticipating this very moment, not knowing how or when it might come but wanting it to the depths of her being.

Without moving a centimeter, she reached for him. Masculine and alert enough to recognize the fact, his chiseled lips curved into a lazy smile, which crinkled the corners of his eyes, deepening the beginning of sun-squint lines there. “Are you really that sweet, Miss C.J.? What a surprise! I would have said salt or pepper were more descriptive of your character.”