Cameron Olsen believes in three things: the duty to his badge, the honor of being a police officer, and the love he has for his partner.

As a member of Toronto’s elite Special Investigations Unit, he has the privilege of working with Jaden Black, a power but naive telepath. As they hunt down a child rapist and killer and the case takes an unexpected turn, Cameron questions his badge, his profession, and who exactly his partner is, and what she’s been hiding from him. 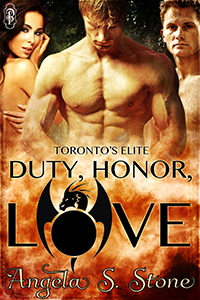 All of the sudden, Jaden froze. Panic radiated from her. Not words, but pure emotions hit him square in the chest.
No. It couldn’t be.
Jaden choked down the bite of muffin she’d been chewing on. She closed the lid of her laptop, stuffed it in the case, and hurried out of the coffee shop. The pain she projected left him surprised no one else stopped to stare at her.
He grabbed their drinks, leaving the half-eaten muffins on the table. He shoved past a dark-haired woman going into the coffee shop as he ran after Jaden.
He found her curled in a ball in the backseat of her SUV. Tears streaked her face, her heavy eye makeup running into a mess. He climbed in, opening his arms to her, and she buried her face in his chest. He patted the back of her head, smoothing her jet-black bob. His heart broke a tiny bit. He could count on one hand the number of times he’d seen Jaden this upset. Whatever she felt, it was bad and had changed his crass, flippant partner into a scared kid herself.
“What happened?”
She didn’t answer.
“Jay, talk to me. What happened?”
A wave of sorrow hit him. “Emily. I….”
Images flashed into his brain. He could make out the dark figure of a man…and the chain. He could feel the squeeze around his neck and her final thought of how she wanted her mommy.