Earning the Right and the Name

Lana Cross is an average twenty-one year old girl living independently in Valdosta, Georgia, population 50,000. Lana's pretty enough but slightly overweight; dating is a real challenge for her. Upon meeting Nick Navarro, an accomplished portrait photographer who is twenty-eight years old and devastatingly handsome, Lana agrees to enter into a Dominant/submissive relationship with Nick in exchange for him helping her achieve her most secret desires.

Under Nick's instruction Lana flourishes into a beautiful fashionista. And when Lana falls for Nick and the sexual pleasure he draws forth so easily from her body, she becomes determined to earn the right to take on Nick's last name. There is practically nothing she won't do at his behest. But once Lana is on the verge of winning Nick's name, Lana's conservative family confronts Lana about her BDSM activities, including how she has submitted to wearing a corset and entered into the shadowy world of fetish modeling. With Lana's worst fears realized she is faced with a decision only she can make: Appease her family by ceasing to have any contact with the man she loves more than life itself or defy her family and suffer through a court ordered psychiatric evaluation. 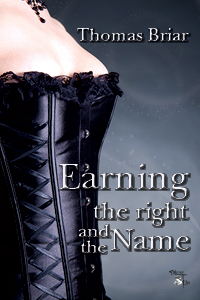 Earning the Right and the Name

"Remember to suck your stomach in, Lana," Lana's older sister, Elizabeth, called out from the sidelines of the photography studio.

Lana continued to smile into the lens of the camera while secretly resenting the remark because she was already holding her stomach in. She couldn't help it if the little pooch at the bottom refused to cooperate. To make matters worse, the photographer behind the camera was totally handsome in a dangerous sort of way. Wearing faded blue jeans with alligator skin cowboy boots and a short sleeved khaki dress shirt, the man moved his lean body around the studio with quiet determination, like a lion or jaguar stalking prey.

As for physical size, the photographer stood a full foot taller than her even five feet and he was in good shape, his taut body declaring his dedication to regular workout regiments. Another plus on his side was he appeared to be in his late twenties with an abundance of wavy, dark brown hair cropped close on the sides and the back of his head. The crown of wavy hair suited his tanned, angular face and his serious gray eyes seem to miss nothing.

The moment Lana had shaken his hand upon introduction she developed an instant crush on him despite him being way out of her league. Another strike against him was that she found his physical directness a little unnerving as he said very little in the way of giving direction; instead, had manually posed her so that her left hip stuck out hard with her left hand casually resting on it. From her right hand dangled a martini glass with faux alcohol and olives.

In theory, she supposed she could have been an elegant housewife hosting a private cocktail party, circa 1950's. The casual elegance of the mock dining room set up in the corner of the studio under bright photography lights helping to facilitate this image. As did the white blouse and prim skirt she posed in; even the way her long, straight blond hair was done up in a French twist bespoke the period, screaming a contented housewife's domestication.

The photographer had picked out the skirt and blouse from a vast collection of clothing hanging on a circular rack next to the entrance/exit door of the studio. He'd inveigled her into wearing the ensemble by saying he had an interesting idea for her if she would only indulge him. As soon as she changed clothes to please the photographer, she found he wanted yet another concession. At his behest she'd reluctantly let herself be ushered to a brightly lit makeup table located along the studio's wall, where the photographer gave specific instructions to her mother on how he wanted her makeup applied and hair styled. Lana still didn't understand why she had to change from her jeans, sweatshirt, and wash & wear hairstyle. The shoot was supposed to be casual. She seethed inside that the photographer hadn't made her sister Elizabeth change clothes also. Elizabeth had gotten to wear Daisy Duke shorts and a bright red tank top while she posed on a plush, red velvet sofa in the opposite corner of the studio. Why had the photographer singled only her out to change clothing, makeup and hairstyle? What the fuck was that all about?

Lana knew her parents and sister, all three standing together on her peripheral, were impatient for the photographer to get her portrait over and done with. The family portrait had already been taken and Elizabeth, so beautifully photogenic and naturally outgoing, had batted her eyes at the photographer and insisted on going next. Lana knew the timing of her individual portrait only denoted her position in the family hierarchy. Elizabeth was two years older and had always come first, probably always would.

"Suck it up, Lana!" Elizabeth cried out. "You don't want to look like a bloated cow in the photo!"

The photographer, Nick Navarro he’d said his name was, immediately looked over in Elizabeth's direction. His expression was icy and his voice like grinding metal when he said, "She looks fine like she is."

Elizabeth reacted as if she'd just been slapped, and hard. She took a half step backward, pouting, "I'm just trying to help her look her best."

"She looks just fine," Nick Navarro reiterated, having resumed looking through the camera's viewfinder, his deep voice evincing a dreamy quality now, like he was seeing something no one else could.

The Dom with the Dragon Tattoo (MF)
Jan Bowles
In Shelf
$2.50
Tweets by
sirenbookstrand