Fifteen-year-old Lupe Hernandez dismisses the legend about her Mexican grandmother's magical earrings as a silly fairytale, despite recurring nightmares of human sacrifice. But when the earrings thrust her into the parallel world of Ixtumea, she must confront the very thing she shuns the most -- her cultural heritage. 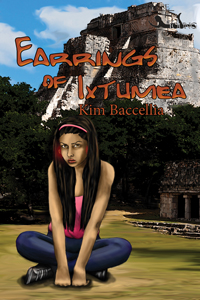 “How often do you hear a girl saves the world?” The melodic hush of Abuela’s voice downstairs in the kitchen woke Lupe. Darkness filled her room. She peered over at her alarm clock, six o’clock in the morning.

She pulled her pink blanket over her head and moaned. Oh, here we go again. Couldn’t Abuela let me sleep in? The blanket might cover her, but she couldn’t escape the sounds of her grandmother reciting yet another fable from the mystical land of Ixtumea. She’d been forced to listen to that stupid tale last night. And even worse, downstairs in their kitchen, listening and encouraging were Abuelita’s amigas.

Lupe stumbled out of bed, kicking aside a collection of navy-and-white uniform clothes on the floor. Throwing on a faded flannel robe, she cracked her bedroom door open. The voices grew louder.

“Si, tell us more!” The ting of spoons against the tiny teacups sounded like a battle cry. Didn’t those women know it was way too early? Jeez, no way am I going to sleep. I might as well see if they made some hot chocolate or tea. Maybe then I can stomach this whole nonsense of Ixtumea and Super-Girl before I go to school.

She had long outgrown the silly tales. Though she hated to admit it, the tale of the girl savior fascinated her. Never had she heard of a teen-aged Latina battling evil forces and saving her people, in a world not unlike the land of Lupe’s Mexican ancestors.

No, the only stories of teen heroes she’d heard starred thin beautiful blondes. Everything she wasn’t.

Still, Abuela’s voice cast a spell on her. Lupe knew she shouldn’t eavesdrop on the chismes, but she couldn’t help herself.

She crept down the stairs past the pictures of the Virgin of Guadalupe, Pope John Paul II, and one of the mysterious Mayan gods.

“Ay, too bad she couldn’t have come sooner,” Coco, their next-door neighbor, sighed. “Too many cosas modernas in our world. Now who believes? No one but us.”

Who are they talking about? Lupe wondered.

“Now that’s one story I’d like to hear,” an unfamiliar gravelly voice replied. “Not another pobrecita guera who steals the ranchero’s heart. How many poor blondes from Mexico do you ladies know?”

“You mean real ones or ones that appear with la magica of the bleach?” asked Esperanza, the acknowledged gossip of the apartment building.

Laughter filled the small condo. Lupe couldn’t help but smile. These ladies loved those telenovelas almost as much as Abuela’s tales. She thought it funny her grandmother got on her case about her Anglo pop idols. Maybe the ladies weren’t different from her, after all.

Lupe crouched down and hid behind one of the banisters. Ixchel, the spider goddess, smiled down on her from a painting on the wall. Red gems sparkled from Ixchel’s earlobes, similar to the earrings Lupe’s grandmother had tried to give Lupe last night.

From this position Lupe saw the usual group of amigas sitting around the Formica table, sipping café de leche or manzanilla—chamomile—tea in delicate small cups. Vivid crimson, yellow, and orange housecoats brightened the kitchen. The women sounded like a flock of lively parrots.

Next to the stove, Abuela worked her magic. She pinched off a bit of dough, rolled the soft masa into the size of a golf ball, and flattened the dough between her earth-colored hands. Quickly she threw the pancake-shaped masa onto a sizzling black pan.

The other women helped. Esperanza scrambled eggs, the vivid red housedress she wore fluttering over her round figure. Esperanza’s large gold hoop earrings bounced with every movement.

Coco stood in the far corner, one large embroidered rose peeking out of her simple rebozo. She cut the tortillas into thin strips to mix in with the eggs, chorizo, and cheese. “Oye, espera un momento. Tell me more about this niña who’ll save Ixtumea.”

“Here, let me finish.” The scrape of a metal chair dragged across the wooden floor and one of the women took over cooking the tortillas.

“Ay, where was I?” Lupe’s abuela asked as she settled down in one of the chairs. She wiped her hands on her apron, sealing in the roasted scent of tortillas.

“The prophecy. How does it go, again?”

“Oh, yes.” Abuelita took a deep breath. Then she began.

Descending through the sacred web,

To vanquish the great deceiver.

Many will be her name:

“Cipriana, do we know this niña?”someone asked.

Lupe leaned down closer to the stair, curious to find out if her grandmother would reveal the name of the person. Wouldn’t it be a real hoot if it were someone she knew?

“Let me guess.” Esperanza turned off the stove. “She’s tall, thin, and has blonde hair.”

“You sound as bad as my Lupita. Nadie está contento con su suerte. Always dreaming the other side is better.” Her grandmother let out a deep sigh. “If only she’d listen and take the earrings...”

“So she hasn’t taken them?” Coco asked. “Does she not know how importante they are?”

"You know the young. Never listen.” Her grandmother let out another sigh.

“If I was her, I’d be dying to use them…wait, maybe, your Lupita is this niña!” Esperanza laughed so hard she snorted. “Wouldn’t that be something?”

Startled at hearing her name, Lupe leaned back against the wall. An old picture of her mother wearing those same earrings shifted above her.

Lupe felt a strange foreboding. The tips of her ears burned. What was wrong with her?
She got up and went back to her room. Quietly she closed the door to block out the voices. A prickly sensation covered her body, along with a sick feeling, maybe Esperanza was right. She thought back to last night and her grandmother’s attempt to give her a pair of earrings, identical to the ones in all the pictures in their apartment. She’d started up again with the legend and refused to let Lupe leave the room. “No, this is muy importante,” she said. She talked about a web between the worlds fraying and the time of the fulfillment of the prophecy was now. How Lupe needed to be prepared.