Max and Lorenzo are strangers who have crossed paths under the most dire of circumstances – the need to survive. With the earth nothing more than a wasteland and solar radiation a constant threat, the two of them set out for a place called Hope Cavern, an underground city where people have taken refuge. Making the journey north, however, they realize there is a price to pay for companionship. 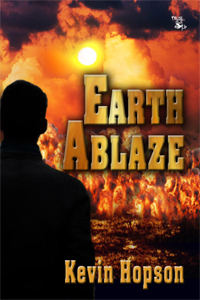 Stepping out into the open, the breeze felt like a hot blow dryer on my face, only ten times worse. Heavy and suffocating, the air nearly stopped me in my tracks. Even after experiencing the heat on a daily basis, it never got easier.

Having met Lorenzo for the first time last week, I still knew very little about him. I ran across him while searching for supplies at a local grocery store. Initially hesitant at the thought of us teaming up, Lorenzo required some persuading, but I eventually succeeded. Though he did not talk much, I took comfort in his company.

A resourceful young man, probably in his mid-twenties like me, Lorenzo had already saved me from death. Some mornings I would wake to find him gone, only to return shortly thereafter with much-needed food and water. I wondered why he took such risks, especially during the dangerous daylight hours, for someone he did not even know. The throbes we wore were his property as well. I owed Lorenzo my life.

Trunk and a Skunk (MM)
Joyee Flynn
In Shelf
$2.99
Tweets by
sirenbookstrand