After taking a new job in a new town, Jeff notices a beautiful woman on a path behind his house that borders a national forest. When he realizes she can see himand he's standing there nakedhe's immediately embarrassed, but also pleased by her appreciative attention.

Later, unpacking his belongings in the garage, the blonde from the previous day introduces herself as Tera and invites him to accompany her into the forest the next morning. That walk turns into an interesting tryst with a woman who is definitely more than what she seems 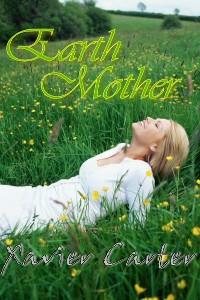 As I sat in the kitchen eating I noticed the blond I had seen this morning, she was walking a dog, well not really walking the dog, as playing with the dog. She had a dog toy in her hand and the little terrier would jump up and try to take it from her as she held it just out of reach. Then she would toss the ball ahead of them. The dog would run like crazy to fetch it back to her. She then tossed it farther than she had previously as she was standing at the border of my backyard. The little dog ran off to fetch the ball, while she stood there staring at me. She could see me now as I had the kitchen lights on.

A chill run up my spine as she stared into my eyes. She was over a hundred feet away and although I couldn't quite make out her eyes clearly, it appeared that she could see mine, as she stood there staring and smiling. She was very pretty her smile seemed to brighten my whole backyard. Just as I was about to turn away in embarrassment the dog returned with the ball, drawing her attention away from me. I watched as she walked away with the dog jumping around trying to get the ball from her hand. As she was about to pass out of sight into the woods, she stopped and threw the ball ahead, turn toward me and smiled. At least I think she smiled, she was quite far away at the time.