Echoes from the Past

Long ago, before recorded time, the Ancients hid the Sacred Covenant waiting for the one to be born to unleash its powerful message to the world.

Dr. Kira Sinclair, a renowned Native American Archeologist is commissioned by An Eternal One to find the Sacred Covenant, but others with less than honorable reasons are seeking it too.

Follow Kira as she travels back in time to unlock the secrets of the Covenants location.

Nipping at her heels is a threat so dark, The Great Spirit assigns a body guard with cunning to meet evil from both sides of the ethereal veil, and an equally powerful but far too seductive Anasazi ghost to help her complete her mission.

Time is crucial and the clock is ticking. 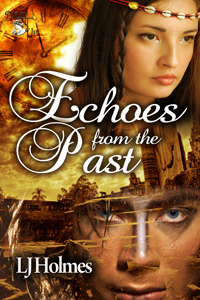 Echoes from the Past

"Jest shut up and keep rubbin."

"Oh yeah,” the dark haired cousin wailed, “easy fer you ta say. Dem giant skeeters di’n't dive bomb yer belly. It were stupid to roll through all dem bugs, and tink they’d not come after us. We shoulda checked it out, but no! Ya had ta go chargin' down here like some kinda conkrin’ hero where da bugs got it in fer us."

"Hank, if ya don't clam up I'm gonna take yer broken wolf call and ram it up yer sorry arse."

The sun's constant beating down upon their heads throughout the morning burned their brains corn fritter crisp. What had been white now looked like a well done lobster tail although neither could recall the boss’s lobster ever showing signs of blistering.

Despite their pain and frustration they’d cursed like mad dogs at each other, beating at the bushes while insulting their heritage. Harmonizing with their name-calling, their stomachs began rumbling, starvation making them crankier than the blistering sun above them.

They were about to turn back for lunch when one accidental swipe at some nasty looking undergrowth revealed the secreted valley. Before they could cheer their discovery Hank wanted to know just how Jed planned to get them down there, spoiling a perfect moment of triumph and accomplishment for Jed.

For the next twenty minutes, they argued, groaned, and smacked each other around a bit, but neither cousin was overly fond of grappling, plus they were conspicuously lacking one important element…a rope.

Finally they came up with the ridiculous idea of rolling down the hill. The stupid plan cost Hank his brand new wolf-call; it splintered and broke beneath the ongoing assaults of him rolling down the mountain's edge with it still in his pocket.

Of course once they landed and struggled to their feet, both found themselves sprouting multi-colored bruises and welts from the damned skeeters that would stay around for weeks reminding them over and over again of their foolishness. Neither wanted to contemplate how they were gonna get back up that steep hill.

It didn’t take them long to figure out what they’d gotten themselves into. Needing something to soothe the skeeter bites they made a mud paste their mamas used to slather on them, choosing a fallen tree log shaded by a towering maple upon which to lower their prickly bodies, and began harping anew at each other about their predicament. Between the slaps of mud against skin and their quarrelling, neither combatant heard the musical hum of buzzing from below them. Quiet quickly gave way to loud and fuming.

Their first and only clue to their new dilemma came when both felt the numerous attacks of the log nesting swarm of bees efficiently stinging their delicate posteriors.

Screeching like banshees, they jumped into the air and ran for their lives to the waterfall, cursing every step of the way dropping below the waterline, and only popping up enough to let their noses and mouth suck in air.

"Iz eet safe?" Hank asked loudly after some time passed so he would be heard over the thundering crash of the water's spray.

"I ain't stepping out dere and gettin any more of me bit dan dey already got." he refused shaking his head emphatically. “I might not be a genius, but I ain't stupid, neither.”

"Well," Hank blustered, "if you's so all-fired brave, you check."

Jed glowered at his cousin. “One a us iz gonna hafta check it cause dis here water iz freezing the front part them bees and skeeters didn' poke!”

He was not as eager any more to finish this job. "Iffen we stay here," Jed argued, "weeze gonna freeze ar nuts off."

“I jest know I’s got a whole hoarde of stingers left in me arse. Come an look afore I gits ‘fected.”

“Tchh. Like hell! I ain’t touching yer arse. And ya kin pluck out yer own stingers iff’n ya got any,” Jed snorted twisting and turning wildly to check the extent of his own butt’s battering. He stopped in mid-poke. “Ah hell…can ya feel yer nuts?”

Before Jed could respond, his swollen, red-hot arse began vocalizing over their ill-treated condition. Bee venom detonated from his butt hole outward. He wanted to scream. He wanted to run. He wanted to stay here until he grew too numb to feel anything.

One minute Jed was contemplating their next move, the next the decision to dash was taken out of their hands. They yelped at the top of their battered lungs once more and ran like all the demons from hell were chasing them.

But the crunching pain went right along with them.

Attached to both their sorry bums were some aggressively jawed, snapping turtles.