When Greg Morton returned to Edinburgh, it was to follow his dream of opening the smartest bar-bistro in town. Now Tellers’ is a huge success—but the truth is, deep inside, it means little without the love of his life.

Four years ago, he left Julia Brady behind in London to realize his business ambitions in his Scottish home town. By the time he’d recognized his mistake and admitted to himself he wanted her back, the grapevine told him Julia had moved on—and Greg had to face the fact that he’d been a fool.

When Julia appears out of the blue in Tellers’, he knows the only thing he should do is walk right up to her and say hello. But it looks like someone else has their sights set on her, and he’s a quick worker.

Is Julia about to disappear from Greg's life a second time - this time, for good? 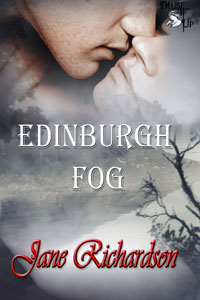 Heat Rating: Sweet
Word Count: 8,277
1 Ratings (5.0)
Contemporary Short Stories
In Bookshelf
In Cart
In Wish List
Available formats
ePub
HTML
PDF
Mobi
Cover Art by Suzannah Safi
Reviews
If you fancy a trip to Scotland, then please read Jane Richardson's `Edinburgh Fog'. It's full of the sounds, smells, sights and sounds of that amazing city, and more. The story is one of love lost and then recovered, a haunting, beautiful tale that stays long in the memory. Written in clear, moving prose, it takes us deep into Greg's life and heart. I read it and was cheering him on, willing him to reconnect with the love of his life.

Read it yourself and savour the journey.

“Another pot of coffee, boss.”

Ben shattered Greg’s getaway plans as he slapped his notepad on the marble bar-top. “And Mr. Smarty over there says could that be with hot milk, because he wants a macchiato caldo, not freddo. I told him the milk comes hot out of the machine anyway, and is Freddo no’ that wee bloke with the big feet out Lord of the Rings? Don’t get smart-arsed with me, pal, is what I really wanted to say.” Ben curled a lip and turned to face the growing crowd in the bar as he waited for Greg to top up another coffee jug. “Mind you, for a smart arse, he must have something.”

Greg glanced over at the object of Ben’s ire. “How’s that?”

Ben gesticulated with his chin towards Julia’s table. “Look at him! Manky wee ginger git, and he’s got those gorgeous babes with him. What’s he got that I haven’t?”

“Well, let’s think.” Chrissie wandered over from the other end of the bar to join in the conversation. “Wit? Intelligence? Charm and personality?” she offered, giving Greg a sly wink. Any opportunity to wind up Ben about his ways with women usually wasn’t to be missed, but tonight Greg’s heart wasn’t in it. He pulled out a wooden tray inscribed with the Tellers’ logo and set the coffee pot down. “Probably just friends from work.” He half-filled a stainless steel jug with milk, jammed it under the foamer nozzle and let it rip.

Chrissie wrinkled her nose and nodded. “He doesn’t look like the world’s greatest lover to me, Ben. Your crown’s safe, big man.”

Ben grinned as he reached for the tray. “Aye. You’re right there. Watch me go.”

“To show lover-boy how it’s done, what do you think?” He flicked a look over his shoulder. “Those babes’ll be nibbling their complimentary biscotti from my hand before I’m done. Man, oh, man...gimme an older woman any day. There’s no substitute for experience. What age do you reckon?”

“Twenty-nine,” Greg said, with much more precision than he’d intended to let show. “Or thereabouts,” he added lamely, relieved Ben hadn’t noticed the fact that Greg could have given him Julia’s date, time and place of birth too, had he asked.
Ben tipped his head, weighing up the facts. “A bit older than my usual conquests, but then, what’s life if not a challenge, eh, boss?” He balanced the tray high on one hand and sauntered in the direction of Julia’s table, six-pack abs and butt muscles on display, looking like a walking anatomy chart.