Jack Bisson is a welder from Calgary, sharing a business with his brother and disapproving, emotionally distant father. Rather than celebrating his birthday with his family, Jack prefers to avoid his father and spend the evening out on his own. Jack’s meets Willem in a gay bar, a meeting that will change his life significantly.Willem de Vries is a South African on a temporary work permit in Canada. Although smitten with Jack, Will’s insecurities lead him to abandon Jack when he suddenly returns to South Africa.

Jack follows Will, determined to learn what went wrong. When they meet again, they resume their relationship, rebuilding their trust in a remote corner of the South African wilderness. Then disaster strikes. Seriously injured Will has to fight for his life. Will he survive, and will Jack be able to endure the prospect of losing Willem once again? 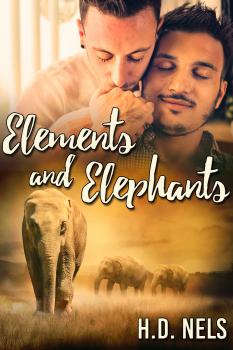 Jack was looking forward to a cool shower followed by a decent meal. It was a typical day’s work but the heat of the summer afternoon made simple tasks more tedious. As much as he loved his job he was growing weary of his father’s constant criticism. After a huge stretch and yawn he locked his truck and walked towards the entrance while contemplating supper. He took his work boots off in the lobby, not taking the risk of tracking grime from his jobs into the place. He’d just inserted his key into the lock when the door opened and a tall cold glass of lemonade was passed to him.

Jack blinked in surprise at Willem’s sheepish smile. “You’ve got a lovely neighbour. She let me into the lobby.” He actually blushed. “When the building manager asked what I was doing there I told him I was your new boyfriend but had forgotten the key you gave me. I had a few bags of groceries so he let me into your unit.” He grinned. “Drink up, dinner’s almost ready.”

Jack walked inside almost in a daze. He finished the refreshing drink and placed the glass on the counter. The smell of something cooking was making his taste buds tingle in anticipation. He was brought from distraction when Willem spoke.

“Go grab a shower. I’ve got things under control here. I noticed the monstrosity on your balcony so we’re having a braai this evening.”

Jack was about to go when he turned back, puzzled. “What exactly is a braai? Animal, vegetable, or perhaps some form of seafood?” He frowned. “I’m not and I repeat not, eating bugs. If your recipe calls for bugs, I’m going to Harvey’s for a burger.”

Willem snorted. “Braai is Afrikaans for barbecue. I bought some steaks and sides while waiting for you to come back. They’re just about done depending on how you prefer yours.”

Jack nodded and went to get himself clean. He returned wearing casual clothes and helped Willem set the patio table. “Good call -- eating out here is always nice. Besides, I can chuck you over the rail if any of the sides are bugs.” He chuckled as Will dished up the steaks. “My brother’s having a braai Saturday to celebrate my birthday. You don’t have to be back to work until Sunday so how about joining us? Peg, my brother’s wife, is an awesome cook. You’ll get to meet them and their kids, Bryan and Lucy.”

Willem nodded and said, “Let me make a quick call to the lodge. They don’t mind us swapping shifts as long as everything is covered and nobody goes to overtime pay. That way I won’t have to leave early Sunday morning to get back. It’s a three-hour drive when there’s light traffic.” Willem quickly made two calls before coming back to the patio with a wide smile and a pie. “I bought dessert but Ma makes the best pie I’ve ever tasted. I’ll Skype her to get the recipe and treat you. She’ll like you even though you are gay. They don’t really like that part of me.”

After both men were stuffed Jack shooed Willem inside while he began to clean up. “You did the hard work, I’ll handle the rest. There’s beer in the fridge, wine in the cooler, and I have a bottle of whiskey on the rack with the glasses. Help yourself to anything.”

“Thanks for letting me stay. Staff rates at the hotels aren’t bad but the company here is much more entertaining. I’ll pass on the drinks but if you don’t mind I’d kill for coffee.”

“No need to resort to violence. I’ll toss a pod in the Keurig and your cravings will be calmed in no time.” He quickly prepared two mugs.