Sometimes love can be found where we least expect it.

When Parker Phillips, a successful attorney, has a confrontation with his friend Ava's abusive boyfriend, he finds himself facing assault and battery charges, and he's ordered to attend an anger management course. Parker, who has never been attracted to a man, is drawn to Dr. Jace Cross, the psychiatrist leading the class. But how can that be, since Parker is straight?

Jace accepted the fact that he was gay many years ago, and he's comfortable in his sexuality, but he's been single for some time now. He throws himself into his work to fill the lonely void.

Although sparks fly whenever they're together, Parker's reluctant to embrace these feelings he has for another man.

Can the sexy doctor help him discover who he truly is? 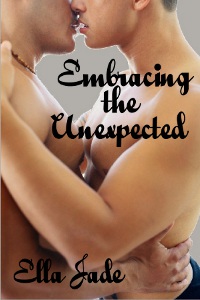 How far was Jace willing to take this? He was comfortable in his sexuality and had known he was gay ever since high school. He had no problem exploring this relationship, but he wasn't sure what Parker wanted. Up until now, Jace only had relationships with men who were open with their sexuality. He'd never had to ask a potential partner if they were into men.

Jace sat on the edge of the chaise lounge, but never expected Parker to sit in the small space with him. He could have sat anywhere else in the room. That had to mean something, didn't it? They were close enough that their thighs were pressed against one another and their shoulders were touching. Parker had his hand in his lap, so Jace reached out and placed his hand on top of it. Parker looked down at their joined hands, and Jace could feel how tense his body was.

"I know." He tilted Parker's chin up with his free hand. "But you can feel it."

He nodded and Jace felt a sense of relief. If Parker realized there could be something between them then that was half the battle.

"Maybe you should just go with what you're feeling." Jace wanted to encourage him, but he didn't want to push.

"I had a really good time tonight," Parker admitted. "And I want to see you again."

Jace leaned closer, never taking his eyes away from Parker's or removing his hand from his. He could feel Parker's warm breath on his mouth and his eyes looked so inviting.

"You're going to have to go slower than you're used to," Parker said.

"Slow can be good." Jace smiled as he brushed his lips against Parker's jaw, moving toward his mouth. Parker looked down and Jace sensed his embarrassment, but he couldn't help himself, so he slowly moved his lips against his. They were so soft and warm, and he wanted to explore more of him, but he didn't want to rush him.

He couldn't take it anymore. He had to deepen the kiss. He needed more, so he moved his hand over Parker's shoulder and up to the back of his head, pushing him closer to him as he slipped his tongue inside his mouth. Parker briefly reciprocated and Jace thought he'd blow his load from the taste of him, but then Parker pressed his hand against his chest and tried to push him away.

"I don't—" Parker was breathless, and although the man looked conflicted he didn't move his lips away from Jace's.

"You don't what?" Jace whispered against his mouth as he pressed his forehead to his and played with the hair at the nape of his neck.

"It's just different," Parker admitted. "But I like it." He shifted in his seat, and Jace knew exactly what he was feeling. He was sure Parker was just as hard as he was.

"Parker," he mumbled against his lips. "I'm willing to wait for you, so why don't you relax and let's see where this goes?"