Emma With Something Extra

Emma has a secret—and not the good kind. She can hear people's thoughts.

When Sara Davis, an adversarial school newspaper editor, convinces her to be the focus of the Senior Feature, Emma doesn’t realize what she’s getting herself into. Lacking Emma’s cooperation, Sara writes the story anyway, setting off gossip and speculation. Worse yet, the article comes dangerously close to exposing Emma’s secret and threatens her crush on the new boy at school, Nick Knight.

Keeping her “talent” from derailing her social life becomes more and more difficult as classmates begin to suspect Sara was right about Emma. 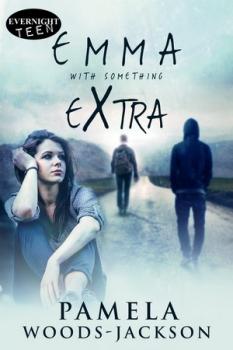 Emma With Something Extra

“Uh…” I dropped the napkins he just handed me and awkwardly reached down to pick them up. I stood back up, dignity somewhat shaken, and smiled back at him. “Emma Austin. Senior. You?”

He grinned. “Senior also, just transferred in from Colson Academy up in South Bend.”

I waited for his thoughts to tell me why he’d transferred out of a private all-boys prep school in October of his senior year, but I didn’t “hear” anything. Maybe I just couldn’t concentrate with him looking at me with that twinkle in his eye. I shrugged it off and pointed at the table where Flip and Hattie were waiting for me, as well as my now-cold tacos. “Wanna join us?”

“Another time. I’ve already staked out a spot.” Nick tossed his napkins and eating utensils onto his food tray.
Bummer. But it didn’t surprise me that someone else had already snagged the new guy. “Okay, well maybe I’ll see you around.”

“Hope so, Emma,” he replied with a cute grin.

I tried to figure out where Nick might be heading. Jocks table? Artsy kids? Underclassmen? I spotted Sara Davis on the other side of the room with her crew, Katherine Howard and Faith Barlow. Sara and Katherine had their heads together, giggling, and Faith occasionally smiled, but she couldn’t have been paying much attention because she had on her headphones and was busy writing in her notebook. I just hoped Nick wasn’t headed over there. No telling what Sara might tell him about me.

Despite my unrequited love for Hank, I was still feeling gooey from Nick’s adorable grin. I took a deep breath and, with one quick glance over my shoulder, hurried back across the room and sat down between my two friends. I took a bite of taco, but I’d suddenly lost all interest in food.

“Girlfriend, who was that?” Flip demanded as he craned his neck to get a better look.

“Said his name’s Nick.” I took a few gulps of air, hoping to control my rapid heartbeat. “And I’m pretty sure he’s not playing on your team.”

“That means he’s playing on mine,” Hattie exclaimed with a fist pump to the air. “Did he say anything about a girlfriend? Think anything?”

I shook my head. “Just said he was a new transfer from Colson Academy up near Chicago. I must have been too flustered to listen to his thoughts.”

“But you’ll find out, right?” Hattie stood up, scouted out the cafeteria, and spotted Nick as he sauntered to a table with some giggly eleventh grade girls. She scowled when he sat down next to a cute one.

I had to admit Nick was intriguing. Then it hit me. Maybe the reason I couldn’t hear his thoughts was because they were about me. Since I’d never heard a guy’s romantic thoughts about me…

Hattie tugged on my arm. “Emma, you’ve got to introduce me.”

“Um…” My best friend wanted to go out with Nick and I realized I wanted a chance with him myself. Since there was never anything official between Hank and me, and all he ever talked about was school or Rachel, maybe I was wasting my time hoping for more.

Then I heard a loud screech—okay, only in my head—but I recognized it and instinctively covered my ears to block out the internal noise.

Flip scrutinized me and lifted an eyebrow. “Kendall?”

I nodded as I located her in the crowded lunchroom as she made a beeline to the new guy. Kendall Manheim had radar when it came to hot guys. She’d already pulled up a chair next to Nick and was stroking his arm and batting her eyes. Vintage Kendall.

Hattie groaned. “Kendall?” She looked me in the eye, all serious. “I still don’t have a date for Homecoming and you know how tongue-tied I get around boys.”

“I don’t mean you, okay?” She turned back to me. “Can you please ask Nick if he’ll take me to the dance? Before Kendall gets her claws in, because then I’ll never have a chance.”

Hattie wasn’t the kind of girl guys were instantly attracted to. In fact, unless she was on the basketball court, they rarely noticed her at all. I scrutinized her look—no makeup, hair pulled back in a ponytail stuffed into a bun, and dressed in her usual athletic pants and matching jacket. I loved her, really, but she was so not Nick’s type. Kendall, however, might be. I shuddered involuntarily.

“I’ll see what I can do.” If my best friend wanted to go out with this guy, maybe I could make it happen, despite my own agenda. But if Kendall got her hooks in, Hattie and I were both out of luck.

And I didn’t even find out his last name.