Jim Lang is a corporate bureaucrat lost in empty time where life has little meaning beyond daily drudgery when he is set up to take the blame for international industrial espionage, stock fraud and murder. Pursued by the police and the killers, Lang must find a way to turn the tables on the corporate titans who betrayed him before they kill everyone he loves. 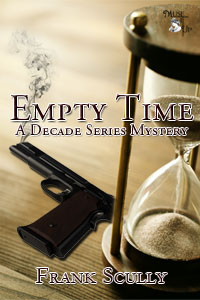 He walked in the center of the street away from the trees and the gloom that surrounded them. The low drone of a car’s engine coming up the street reached him before he could see anything. He stepped out of the street into the shadows that now became his friends.

A taxi cruised past him casually and over the bridge before stopping at the apartment building. One person got out. The car door slammed and the taxi moved away.

Lang moved back into the street and hurried to catch up to the figure on the other side of the bridge. He called out softly, “Mimi! Mimi!”

Whether it was his muted calls or the sound of his stumbling, pained steps that she heard he didn’t know, but she stopped and turned to face him. He waved. She waited.

He was on the bridge now. She was standing on the stoop to her apartment building. The light illuminated her face. He thought he saw her smile and it lifted his spirits.

“Herr Lang.” A soft voice called, freezing him in mid stride. It came from just behind him.

He turned his head and saw Two walking toward him. His steps were a confident march and his expression as arrogant and smug as ever. Where had he come from? Two closed the distance until he was less than arm’s length away.

As if he could read his mind Two answered, “You were easy to follow. I could have killed you many times. I just wanted to know where you were going. Now I know. Maybe I’ll keep your appointment for you. She will appreciate having a real man.” His voice was thick and heavily accented, but the slow mocking tone translated perfectly.

Lang could see a gun in Two’s right hand. He held it down by his side casually as if daring Lang to try for the gun in his pocket. Their eyes were locked in a challenge only one could walk away from. Lang knew he had no chance and no other option. His first move would be his last. And no move would be to surrender and die.

“Was ist los? What’s the matter? Who is this?” Mimi said as she walked closer. While they had been engaged in their face off, she had approached them until she was only a few steps away.

Two reflexively raised his pistol in her direction. Lang took advantage of the opportunity. His hand dove into his pocket, his fingers closed around the pistol as he stepped next to Two to grab his arm. Two jerked his arm away before Lang could get a grip, and swung to hit Lang.

Lang pulled the trigger on the gun in his pocket that he had rammed into Two’s stomach. It jumped in his hand and a gust of air burst out of Two’s mouth. The sound of the shot was bizarrely muffled by Two’s body. The loudest sound came when the bullet exited Two’s back leaving a large hole. Lang stepped back from Two who stood oddly askew before he stumbled back toward the bridge railing where he hung for a moment before slumping down to kneel on the roadway. He tried to raise his gun once again to shoot at Lang.

Lang felt paralyzed as he watched Two struggle to bring the gun in his hand up. Inch by inch through sheer will power Two overcame his wound. His jaw was set in fierce determination. Before he could get it level Mimi delivered a hard kick to Two’s side forcing him to crumple, the gun fell from his hand as he toppled over to lay flat.

“Pig,” Mimi cursed at the fallen man in a mix of German and English. She came over to Lang and inspected him closely. His pocket was still smoking from the second hole he had put in it. His eyes were glazed and he stood stiffly transfixed. She put her hands to his face and forced him to look at her.

The words took a few moments to filter through. He shook his head.

“Good. We must move quickly,” she said turning back to Two. “You lift his shoulders over the rail.” She grabbed Two’s feet.

Lang couldn’t move. What was she doing?

He grabbed Two’s shoulders and they hoisted him up to the bridge railing. He wasn’t dead yet, despite the hole in him and all the blood loss. He groaned out a few words that Lang couldn’t decipher. Mimi could, she answered back in the same German dialect with venom in her voice.

Once they had him on the top of the wide concrete bridge railing Mimi pushed his feet over. Lang still held his shoulders and hesitated. Mimi reached out and shoved Two out of Lang’s arms. Two grabbed on to Lang’s coat with surprising strength as he fell. Only the bridge railing and Mimi holding onto his arm saved him from being pulled over into the water with Two.

Two looked into his eyes with an intense hatred right up to the moment that his grip weakened and he slid away to fall into the water ten feet below.

The water accepted him with little splash; Two did not appear again. Mimi pulled on Lang’s arm impatiently. When he looked at her he saw that she had picked up Two’s gun.
“We must hurry before anyone sees us. Come with me.”