These 14 tales of fantasy and magic are sure to delight readers of all ages! From goddesses and queens, amid fairies and warriors, the strong women in these stories by best-selling author J.T. Marie explore the realms where dreams and reality meet.

Contains the stories: A Hero Is Never Too Old, Bones of the Sea, Eyes Like Twins, Fell, Gypsy Wine, Illusions of Betrayal, More Than Mortal, Runes of the Quest, Running, The Glitter Prince, The Key, The Scar, The Shadow Fey, and The Warrior Within. 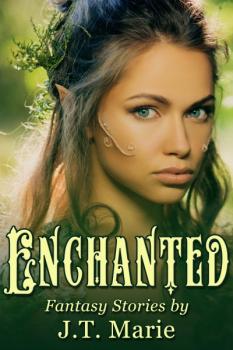 EXCERPT FROM "More Than Mortal"

Lying there, stretched along the wall, the limestone cool beneath her body, the cat warm beneath her cheek, Dendera felt extremely sleepy. I’ll just rest my eyes for a moment, she thought, drowsy. Just until Jabari returns.

Behind her closed eyelids Dendera saw black shadows rimmed red by the sunlight slanting through the leaves. As the cat breathed, the light shifted, the shadows moved, and she saw Thelios on a field of battle. The red light became blood seeping into sand, the shadows bodies lying dead, discarded. Thelios stood over the scene, triumphant, a foolish grin spread across his Grecian face. The men under his command were scattered around the field, cheering in the summer sun, proclaiming their victory to the gods.

A tall hedge of papyrus stood nearby and Thelios turned toward it, wiping the blood from his heavy battle ax onto the grass. Movement in the hedge made him pause and he straightened slowly, his ax ready for attack. Parting the hedges, he saw the back and tail of a large feline. Without a thought, he raised the ax higher -- the Egyptians held cats in high regard but the blood fever of war still sung in Thelios’s veins and he was no Egyptian, despite his claims to the contrary. It was just a cat -- no one need know.

Dendera’s brow creased in consternation. She knew Thelios’s thoughts as if they were her own. Although she wanted to cry out, to warn the cat and spook it into flight, she couldn’t. But as if it heard her unspoken warning, the cat looked back over its shoulder. Its face was that of a woman’s, with beautiful eyes as large as lotus petals and dark hair cascading down her shoulders and back to blend into sable fur. In those eyes, Dendera could see the immortal waters of Chaos shining like the Nile. A coy smile toyed at the edges of the feline’s lips as she studied Thelios. Shocked, he lowered his ax and reached for her -- she was the most beautiful woman he had ever seen.

But she turned around and, with a flick of her tail, was gone.

Dendera smiled. Beneath her, the cat’s purr grew louder, erasing the scene of battle. Now stars littered the sky, illuminating the same hedge in the dark of night. Vaguely she could see the shadow of a man, sitting still, waiting. Soon a large feline sidled into view, sniffing the reeds. The cat did not see the man until it was too late -- as it neared his hiding place, the man leaped out of the reeds and lunged for it. With a burst of speed, the cat was off, but he held one of its front paws tight in his fist -- the cat dropped to the ground and twisted, claws raking the man’s face as he clamped something onto the cat’s forepaw. Then he fell back and waited.

Free of the man’s grip, the cat tried to run but could not. Something dark and slippery twisted itself around the cat’s paw, circling its arm. As Dendera watched in horror, the cat seemed to fold into itself, paws and face buried against its chest. Its sable fur drew up towards the head, leaving soft pale flesh in its place. The body lengthened -- Dendera heard quiet sobs of pain as bones crunched, stretched, and molded into new shapes. When the man approached, the cat reached out to claw at him but instead of a paw there was a delicate hand, its short nails useless against Thelios. He lifted the body and Dendera gasped. What was once a cat was now a lovely Egyptian woman, the fur now long hair, the eyes mortal and human.

A gold band wrapped itself snugly around the woman’s upper arm. In the form of a snake, its tail in its mouth, the band twisted itself around her skin. Though she pried at it fiercely, tearing her nails until they bled, the band would not come off. Thelios carried her away.

Abruptly, the rhythmic purring ceased. Startled, Dendera opened her eyes to find she had been asleep -- the light slanted sharply through the leaves and she heard soft footsteps nearby. Jabari, she thought. As she lifted her head, the cat bolted from under her, and before she could catch herself, she fell from the wall into the garden. Twisting quickly, she landed on her feet. Pain shot up her legs and into her thighs from the impact of her landing, and she knew it wasn’t Jabari she had heard.