Do a favor for a pretty girl, and change your life in the process. When Susan, a beautiful, yet mysterious, young woman approaches a construction worker at a horse show, neither of them realized what was going to happen next. She wanted someone who could haul a horse trailer and he had a shiny new pickup truck-and her choices were rapidly dwindling. Striking an unusual deal she gave him a pile of cash in return for an agreement that he'd buy a particular horse at auction, drive said horse to a specified location, and once there set it free. It certainly wasn't the usual pickup line, so I picked up the horse, drove to the locationand where a horse had gone into the trailer, Susan now came back out. Having gotten this far I now had no intention of letting her get away easily, but could such a relationship ever work? 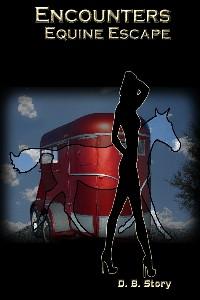 It was several bids later that it suddenly dawned on me how this scam could operate. And it would be completely consistent with the bizarre instructions I'd been given.

Although I still had several hundred dollars in reserve it was clear that the man was bidding to buy back his own animal. That meant that any money he spent, minus commission, went right back into his own pocket if he won.

So far I wasn't using my own money, but I'd made an agreement. What if the amount went over what my mystery girl had given me? I'd given my word. Was I prepared to dip into my own bankroll to carry it out?

Considering what I was supposed to do afterwards, I could be suckered out of everything I had with me just for being an upright kind of guy. Certainly this man could be putting on an act with his daughter playing her part. Interesting how we'd managed to be sitting so close together that I could overhear every word. If so, he knew exactly how much I had to spend before I was into my own money.

It could be a con-job after all. I was obviously in construction, and with a brand new pickup. I could have been marked the moment I arrived since everybody knows construction workers make good money, and often spend wildly in bars, or just carry it around for status.

I didn't have much time to think it all through, however. The man had bid again and the auctioneer was looking at me for a response.

"One moment," I said loudly to him, looking immediately away before he could refuse my request and close the auction.

I looked over to the man, who had resolutely not looked my direction even once so far.

"Excuse me," I said quickly with the best smile I could manage.

He nodded back, no happier with me than he was with his bratty daughter.

"I have only one question, if you don't mind." Good manners can get you far, because it forces the other person to rise to your level.

"What?" he asked, not real nicely at all, but better than it could have been.

"All I want to know, Sir" I again gave him the respect of that title, which truly does work wonders everywhere it's used. "All I want to know is, if I'm bidding against you, or your daughter, for this animal? If you don't mind telling me, that is."

It took him a moment, then he got my insult. I'd just called his manhood into question. Was he calling the shots here? Or was he pussy-whipped by a twelve-year-old prepubescent female?

His face turned red. He took a deep breath to blast back at me with, while I quickly put my negotiating stupid face back on, as if to say I couldn't possibly be smart enough to have just pulled one over on him. I let him think it had all just been a lucky accident on my part.

Then I sat there, my expression and posture saying as clearly as there's a sun in the sky, go ahead and hit me with your best shot because I won't hit back. Talk about taking all the sport out of it. Not to mention how foolish you'll look to the entire crowd that undoubtedly includes many of your friends in the business if you actually take me up on it.

It disarmed him. He had nowhere he could go successfully from here. The threatening breath whooshed out of him, while the couple he took after that only came out as harmless harrumphs.

Realizing that, between me and his daughter, he was totally defeated he took the only course of honor available to salvage his tattered pride. He turned away from both of us and turned off his ears.

The daughter glared at me again. How dare anyone manipulate her dad except her was written plainly all over her face. But she was beaten. I gave her a slight smile, although she immediately turned back to insist that her father fight on he wasn't listening any more.

I made one more bid and the mare was mine.

Now here's where it gets strange.

I went down and counted out the cash. Then I gave them the trailer number out back that I'd scribbled down earlier for them to deliver my purchase to.

They gave me a bill of sale and asked me to fill out a registration form. I said I was in a hurry, grabbing the blank form and promising to mail it back later. I left before anyone could protest.

Then I was backing my pickup up to the trailer as they were leading the horse into it. I thanked the guys, giving them each a twenty, before pulling out as gently as I could. I've hauled a lot of stuff before, but never horses. I treated her like the blasting supplies I carry sometimes because no one else will. Pays well too. Soon I was out on the highway for the hour's drive to my final destination.

I followed the directions given to me. The last twenty minutes were over small country roads with the last miles unpaved. Finally I saw the pullout up ahead at the crest of the highest ridge.

Pulling into it showed me why someone had put it here. There was a beautiful view for miles of the surrounding meadows and forests. Well worth the trip just for this view. I enjoyed it for a minute before getting out.

The last part of my instructions were to take the halter off the horse I'd purchased with someone else's money and release her into the wild. Then return the rented trailer to the show and keep any money remaining for my troubles. I'd given my word. But extraordinary circumstances sometimes call for extraordinary adjustments to the situation.

People think construction workers are dumb. Like anyone can swing a hammer, drive a pickup, or hold up SLOW/STOP signs in construction zones. This attitude goes back to high school when the "dumb kids" took shop classes because they couldn't do anything else well.

Well hey, I'm a young man, and chances are good I'm making more than you do. I own my own home and the acres around it. I paid cash for my truck. I'm union and good at my job so I get all the work I want. If I want to work hard I'll pocket over a hundred and twenty thousand a year after taxes. And my work is healthy. You won't find someone sitting in a chair all day in front of some computer screen who can hike, fish, lift, or shoot like I can. Now who's the dumb one?

And I've learned a lot more from my ancestors than just the basic rule for staying out of trouble. I've grown up on a thousand years of oral history. The upshot is that a lot of things are possible if you believe them to be. And sometimes people don't always ask for what they really want.

So instead of opening the trailer and releasing the mare, which in a true con-job would have then trotted home to join my money in their pockets, I rapped loudly on the back of the trailer's metal door instead.

"Hey in there!" I announced loudly. "Five minutes and I'm coming in. Lets talk."

Having said that, I then walked over to the edge a few feet away, put a foot up on a handy boulder, and admired the unmatched view.

I didn't need my watch to tell me when the interval had passed. That's just part of my measurement skills. I walked back over and rapped again announcing, "Time's up."

Then without any further hesitation I pulled out the locking pins on the door and opened it. It took a moment for my eyes to adjust to the dimness and empty space, before I stepped inside.

No horse here. You may have figured this out already. Instead, sitting on a blanket covering some hay at the front was my beautiful mystery girl trying to pull on her boot. She had her pants up, but the shirt hung open showing me I was right about her boobs swinging free under it. To her credit when she looked up and saw me, her first reaction was not to try and cover herself.