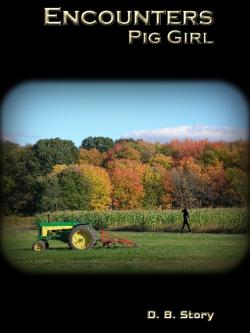 "Be prepared to be entertained…[T]he words are very well written, engaging and so I simply couldn’t stop scrolling down the pages."

When you live out in the country, you get know a lot about animals. It's instinctive with us. And when you farm, you learn a lot about pests.

I was sitting on the porch while the day faded into evening. Had my double-barrel across my lap looking down the hill over my crops.

My family has lived in this house on this land for five generations and our shack-cum-house dates back to the beginning—though in the good times it's been fixed up a lot.

I like sitting out on the porch in my grandma's favorite slider—kind of a rocking chair to those of you who don't know what a true slider is—in the evening. I listen to the jar flies making a real commotion, while lightening bugs flicker over the crops.

I grow corn, plus my government-allotted two rows of tobacco, with tomatoes and squash and other vegetables up near the house. And if that corn gets turned into liquid corn by some backwoods boys usin' their pappy's still, well that's just how folks get along out here in these southern hills.

The house is on the top of our hill, giving me a perfect view down the slope to where the cornfield ends at a dark row of trees. Beyond that you go a bit further to reach the river. It's all a man could ever need, or want.

Shining through the window behind me is grandpa's kerosene lamp. It's not that I don't have 'lectricity; we got that back in '35 with the rest of the country. But since the government put in some secret buildings a few miles down the road a couple years back, that 'lectricity just hasn't been the same around here. That lamp ain't failed us since before my daddy was born.

Don't know what them government folks are doing. They've got a bunch of big steel-sided buildings with no windows, and a tall fence with razor wire on top all the way around them, and lots of lights at night that make it bright as day and suck up everyone else's power. They've promised to fix that problem any day now, but it ain't happened yet.

Nobody really knows what goes on there. Rumors are that they're breeding new strains of farm animals, but nobody knows for sure. Sometimes you kin hear barnyard sounds there, but nobody has actually seen anything. Around here folks mind their own business anyway. Maybe that's what they like about this area.

I don't mind the 'lectricity problems. I've got all the modern conveniences. My shack is actually a modern, comfortable home if you step inside, but I'm particular on whom I invite in. And if the power is out again and I can't run the dishwasher for a couple of hours it ain't no big deal. I live alone since ma died, so there's no one else to worry 'bout.

For the past couple nights, however, something's been eating on my corn. That is a big deal round here! The corn is ripe and sweet, full of the sugars and starches that will be fermenting soon enough at a place I won't specify.

I figure my pest may be some kids. If so, they'll be goin' home with a leg full of birdshot—and a lesson on leaving other people's stuff be. No one will say anything about it afterwards neither. That's how we settle things out here.

Other varmints get the buckshot barrel. Them I'm not trying to teach.

When she stepped out of the forest I froze in my chair.

When you're stalking something it's second nature to freeze when you sight your quarry. Nothing sends your prey bounding away faster than a sudden move.

My first thought was that it was a wild pig—not that we have many around here—hunting them is just too popular. But a country boy knows his animals, even when it's just a flicker at the edge of your vision. Movement, position, and a hundred other tiny clues tell the brain all it needs. My mind shouted, "Pig!"

And even after she stood up to reveal something very different, my mind still insisted Pig.

She was easily a couple hundred feet away with the light mostly gone and she was beautiful. I could see a long mane of dark hair, bare arms, and long tanned legs. She wore what appeared to be very brief, tattered denim shorts and some sort of equally short top tied just below her breasts. And she moved cautiously, like a wild animal.

It took her a long time to leave the relative safety on the shadows of the tree line and cross the few cleared feet to the nearest row of corn. She looked and listened, and seemed to be sniffing the air as well.

Gradually I was able to fill in her features, especially after she finally took a step onto the cleared ground.

Her bare midriff showed a tight waist that flared out into generous hips, while the hints of her face looked completely human. Could even be beautiful. Her hair looked like she tried to keep it under control, but it was unkempt enough to fit her untamed nature.

A few more cautious steps took her to the nearest cornstalk where I'd first seen the missing ears. She stopped again and looked right up at me.

But in the shade of the porch, with the kerosene lamp shining dimly through the window behind me, all she would see would be a dark, unmoving shape. Pigs don't see that well anyway, even in the daylight. And the light breeze blew her to me, not the other way round.

I think she was overcome with hunger—or felt it safe enough to grab an ear of corn and focus her attention on it.

She used both teeth and hands to strip it open before wolfing it down kernels and cob. Two more quickly followed.

Then, even though I hadn't moved a whisker, she suddenly looked up in startled fear as I heard a car pass by the entrance to my property a quarter-mile behind me.

She grabbed a couple more ears and was gone back into the trees.

I sat there for another twenty minutes, but she didn't reappear.

Finally I got up and went inside, put down the gun, and got an old blanket. I carried it down to the edge of the trees where she'd vanished as completely as though she were only a figment of my imagination in the declining light. But I could feel her on the back of my neck watching me from not far off—and smell the fear that kept her hidden.

That was okay. I put the blanket down by the nearest tree and trudged back up to the house, closing the door and drawing the blinds.

The next morning it was gone.