I was swindled out of everything I owned by magic, and I've never been happier in my life. So starts out the tale of Barq, a farmer (in a medieval world farming is the original oldest profession) in the fascinating world on the other side of the Enchanted Forest. Taking place in the same magical place as Encounters: CowGirl, The Unicorn tells a tale of a comfortably well-off man tricked into marrying a slothful witch. Not satisfied with half a loaf his deceitful wife schemes to gain it all by transforming him into a random animal. His childhood love of trying to catch a glimpse of the elusive unicorn leads him to believe that of the choices remaining to him, if not a man any longer, then a horse. In the end his new form leads him where his old human self never could have ventured. It's a sexy fairytale from the far side of the forest. 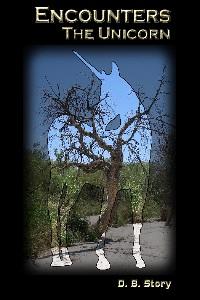 "This delightful addition to the Encounters series was a well written story and whisked this reviewer away."

"...both magical and heart-warming, a tale of true love and selfless sacrifice that serves to remind you what’s truly important in life... D.B. shows a great deal of respect and restraint, choosing his words carefully, and always keeping the focus on the magic, and on the simplicity of love... a wonderful fairy-tale like story"

One night I was later than usual returning to the farm. I'd been late arriving at the meadow due to a stone that had badly damaged my plow, and my unicorn had been grazing right alongside the stream when I'd arrived. This provided the best view of her I'd ever gotten, from the tip of her horn all the way down her slender, yet strong, legs.

On top of this, my wife had been especially foul-tempered of late, convinced that I could do nothing right.

So when I returned to the farmhouse, instead of just entering through the front door, I crept up to a partly open shutter. I moved as stealthy as I'd ever moved in the meadow itself so long ago, hoping to hear just what kind of reception was being prepared for me.

The fire burning in the hearth had an unnatural brilliance to its flames. Usually I had to rekindle the fire each time I returned since my wife wouldn't bother maintaining it. But tonight the flames leaped high, and unusually brightly. The entire inside of my farmhouse was thrown into sharp relief.

My mother-in-law, who never lifted a finger to cook or clean, was standing over the large, black pot. She was actually stirring whatever bubbled inside.

"But what kind of animal will he become?" simpered my wife, looking even fatter than before in the harsh light.

"Whatever he sees first," snapped her mother in response.

"He'd make a good snake," my wife pronounced. "Then someone could run over him with their wagon and kill him."

"Where's the hair?" the mother demanded, truly looking like the witch she was in the light of her witchfire.

"Give it to me now while the flames are their hottest. Any longer and the spell will go bad, and it'll have to be redone from the beginning. Besides, this will be best if we finish it before he returns."

My fat wife fished among her pockets without finding the requested item.

I thought I was off the hook. They couldn't complete the spell without this last item. Now with this evidence in front of me I could be divorced on the basis of witchcraft. The law provided that no man need remain married to a witch, or her descendant, against his will.

As my mother-in-law angrily tapped her foot my wife suddenly dashed into our bedroom. She returned a moment later with a lock of my hair. I quickly reached up to my head, finding the bare spot.

"Now stand back!" the mother cautioned, before casting my hair into the pot.

A moment later a brilliant flash blinded us all.

Unable to see anything, I had the good sense to keep my eyes tightly shut. It was too late to stop them now that I had belatedly realized what they were up to.

I was in a panic, knowing that my life was going to be over in seconds. The exact second I opened my eyes, to be precise.

I could hear them inside cackling as I stumbled about. You don't realize just how much your vision contributes to your sense of balance until you lose it.

In the blackness I stumbled over a washtub and fell, throwing my arm across my eyes to block my vision and protect my face just as I hit the ground. For a moment there was silence as I lay without moving. Then they started cackling again, making too much noise to clearly hear anything else except themselves. It's the most animated they'd been in months.

As I lay there, eyes still tightly squeezed together, I knew I had no plan. I could lay here until the sun rose, but I'd just be discovered, prodded and kicked, until I opened my eyes to stop it. That's unless I just fell asleep and opened my eyes afterwards before I remembered why I didn't want to do that.

Or I could just give up and open them now. Why prolong the agony a few extra seconds. I'd lost and they'd won.

As I lay there I felt a beetle climb over my hand. I brushed it off, but it was the indication of my very near future.

And I might have just given up right there, except for one thing, the secret meadow and its reminder that there really are beautiful things left in this world.

It was that thought that finally calmed me down enough to start thinking rationally again.

I wasn't in immediate likelihood of discovery. Neither my wife, nor her mother, ventured out at night without a good reason. They both despised the night creatures for no good cause I could think of. There's little bad to be found in any living thing, and the night is just a whole new world to explore.

From that thought I wondered, If I have to become a creature, what creature would I like to be?

A unicorn! That was my immediate thought. But that was never going to happen.

Birds have a lot of freedom to just fly through the air and land where they please. That might be nice. Most barnyard animals lived rather carefree lives, even if their eventual fate was to land in some cooking pot. A cooking pot fate was a long way removed from this particular moment, however. Other wild animals had to be ruled out as not being nearby for me to see. My real choices were rather constrained.

Why it took me so long to settle on a horse is hard to answer. I must have just been avoiding the obvious. A horse isn't a unicorn by any stretch of the imagination, but it's a large animal who would truly enjoy the meadow, and as close to a unicorn as I'll ever get.

But the meadow wasn't even on my mind at this moment. As a horse I should be able to go into town and find someone who will recognize my plight and rescue me.

A horse it is! There was no other good choice.