There are tales of skinwalkers, shapeshifters, were-creatures, or the Navajo yee naaldlooshii-supernatural humans who can turn into one or more other creatures. But seldom is it spoken of an animal who can turn into a human. I didn't know any of this when I saw her begging food in the historic Haight-Ashbury district of San Francisco before disappearing into the tame wilds of Golden Gate Park. I only knew that she intrigued me in a way no other woman ever had and I was determined to learn her secret. I didn't realize then that it was a secret that would change both our lives forever. 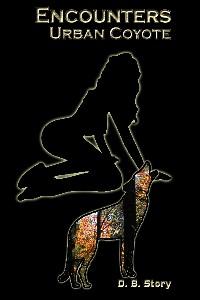 I should have just let it go. In the rational morning light this seemed more like stalking, rather than just a healthy interest in the opposite sex.

Yet aren't stalkers the ones who can't take "No" for an answer? Who send hundreds of letters and make endless telephone calls that soon degenerate into nasty threats? I've done none of that. Are we becoming a society where you can't even go up once to a person who interests you and ask if they might be interested in return?

Those questions haunted me as I staked out the fast food outlet she must have visited yesterday. I brought a folding stool, my notebook, and my portable radio. I listen to KOIT-my favorite soft rock station-when I'm in this city. When I want news, it's KCBS. I sat across the street behind a parked car that gave me a clear view to the front of the establishment.

As I said, I'm a writer. I never have a lack of something to do in my life as long as I have a notepad and a pen. I'd write all afternoon here if necessary, and regardless of whether I ever saw my mystery woman again, I'll still have accomplished something worthwhile today. The interesting thing is that, in this neighborhood, I didn't even look strange doing this.

I'd made sure to arrive plenty early based on yesterday's events. So it was nearly two hours later, and after I'd written thirty pages, before I saw her coming up the street. Even too far away to be sure of her face, her outfit and walk were distinctive. I turned off the radio so that I could concentrate on her. She, in the meantime, was concentrating on stalking the restaurant.

Rather than walk up to it, she stopped nearly fifty feet away and leaned into a telephone pole. Her slim brown figure blended in to it making her almost disappear. She watched for her prey for the next fifteen minutes. Her very manner made her an irresistible inscrutability.

Suddenly she saw what she was looking for. A large man in a suit had walked up to the counter. She timed her move perfectly, catching him as he left with a large bag in hand.

I saw her go right up to him and talk to him quickly. She couldn't have spoken more than two or three sentences.

The man looked uncomfortable for a moment, then reached inside his bulging bag and handed her a couple wrapped sandwiches. Then I saw his fat hand reach around her neck and pull her towards him. Although I could see her go rigid even from here, she let him force a kiss on her before she turned away and rapidly started retracing her steps back down the street.

The large man watched her walk away for long moments before laughing to no one in particular and turning to go the other direction. Unlike the woman, he didn't look like he'd been missing any meals lately. But I didn't pay him any further attention. I was already up and on the move.

Predicting her likely course, and taking a huge risk if I was wrong, I cut down the street before Ashbury. Knowing how fast she could move, I was jogging along myself. I got to the vantage point I wanted just in time and saw her enter the park at the same point as yesterday.

She seemed to ignore me. I obviously wasn't following her, having gotten there first. I'd placed myself ahead of her path from yesterday, to where I'd be able to observe her both entering the same thicket as before, and this time see if she came out the far end-or exited the way she came in.

But as before, all I saw was the same coyote trot out a few minutes later, probably flushed out of her comfortable daytime resting place by the activity.

With the demise of the wolves due to over-hunting and an undeservedly bad reputation-hasn't everyone heard the story of throwing the children one-by-one off the back of the sleigh chased by wolves through the snow by now-coyotes now range in all fifty states and every major city.

I was close enough this time to see it was a female coyote bitch. And one who'd given birth recently. In addition to the gaunt look I see in all coyotes, her stomach hung down loose, with her teats exposed and swollen.

I like coyotes personally. In American Indian lore, the coyote is the trickster of the desert, and the smartest animal of all. They're the ones who brought fire to man, who I guess was too dumb to get it himself.

Because I don't own any house pets, I don't have the main objection many people do to their very existence. I especially enjoy my visits to the desert listening to them sing to the Moon at night-although it sometimes sounds much more like a rowdy political discussion than music.

This one actually passed within a few feet of me, not concerned at all. As long as I didn't make a move towards her, we were both okay. I never let myself forget that these are wild animals, no matter how calm they might seem around people.

One coyote. No woman. And only some writing to show for today's efforts. I went back through the thicket just to be sure. She was gone. 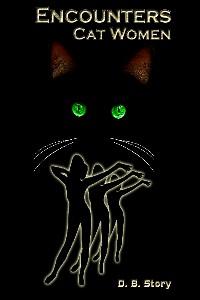