Everlena doesn't usually go out with friends, but when she joins them on a whim, she meets Mika, a man as mysterious as he is delectable. Can Everlena trust the wild stories he tells her or should she run from the menace that follows him? Mika, Fey-King of the Unseelie Court, seeks the princess of the Seelie Court, and is shocked to find her living life as a human. Even more shocking is that she has no clue his world even exists. Mika must get Everlena to safety while convincing her that a union between her light court and his dark court is the only way to end millenniums of violence. With danger around every turn, will Everlena be able to leave her mundane life behind and take her place as a princess of the Seelie Court? Or will the feelings blossoming between Everlena and Mika get in the way? 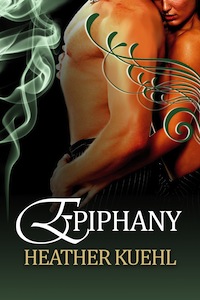 Scooping Everlena up into his arms, Mika dashed from the bathroom. Before she knew it, they were outside, breathing in the cold night air.

Wheezing, she tried to make sense of what had just happened. The ex-girlfriend theory was apparently panning out, especially since she heard Mika muttering, “I can’t believe she did that. Glad I left her when I did.”

“What’s going on?” Everlena’s throat was rough and painful, making her voice sound gravelly. “Put me down, Mika.”

He carefully did as she asked, setting her down on a bench outside the restaurant. Just as carefully, he cupped her chin in his gloved hand and tilted her head to examine her neck.

“You’ll bruise, that’s for sure. Why didn’t you fight back?”

“She surprised me. I didn’t know what to do.”

“You let the leader of Dyier Shola surprise you? I find that unlikely.”

Mika’s eyes narrowed, examining hers as he spoke. “Dyier Shola. The assassins.”

Everlena felt chilling fear slide through her. “What?”

“You really have no clue what I’m talking about, do you?”

“Why did your ex-girlfriend try to kill me? What did you do to her?”

Mika ground his teeth as he shook his head. “Why is it that, even after she tried to kill you, you women always band together? You assume it was something I did.”

“Then why did she try to kill me?”

Mika sighed and leaned back. “I never thought I’d have to explain this to someone of your stature.”