Eric Pread broke up with his boyfriend a year ago, and has been apathetic about getting back out on the market. His friend Sabrina thinks he needs a nudge, and so she sends him a XP30 Sexbot to help him get back in the game.

Sloot is the XP30 assigned to Eric. He's no ordinary android. His creator tinkered with him and gave him the ability to love. That isn't anything Eric wants in a sexbot, and he almost sends Sloot back when he finds out.

But as time passes, they grow closer and closer and it becomes obvious that Sloot and Eric are two halves of a whole.

I’d held out opening my gift as long as I could. But, after all, I’m only human.

Even if he isn’t.

Sabrina had a wicked sense of humor sending me this XP30 for my birthday. For a full week I just walked past the shipping crate, with the company name Arousing Androids stamped on, and pretended it wasn’t there. It might have worked too, except for the little bell that sounded every few days reminding me he needed to be activated.

Sabrina felt sorry for me because I’d ended things with my boyfriend Trae. A while ago, actually. We’d been fighting non-stop, and we’d finally decided being together was more painful than splitting. He’d packed his skinny jeans, and moved out, leaving me with a big empty loft to myself. That was twelve months ago, and I’d made no move to get back out on the social scene.

Loneliness, I could deal with. Or at least I thought so. It was the lack of sex that was getting to me. Sabrina knew I had zero interest in trolling bars for one-night stands, and I didn’t have the stomach for a relationship again. I was nowhere near ready for that.

But eventually my curiosity got the best of me, and I pulled the card off the big box and read the message from Sabrina again: Eric, dude. It’s been a year. You need to get laid. You’re welcome, Sabrina.

I tapped my chin, staring at the wooden box. It was eerily silent inside that monstrosity of a crate. Oh, what the hell. Just open the damn thing. I tugged at the big red bow that said Pull Here. When I yanked, the side of the crate snapped open, still attached to the bow. There was a bunch of bubble wrap that I assumed was there to protect my new friend. The packing materials tumbled to the floor, and that left one arm exposed.

It was a nice looking arm. Muscular, tanned with a light smattering of fine dark hairs. If I hadn’t known better I would have thought it was a human arm. But of course it wasn’t. The box contained an anatomically correct android, made for the sole purpose of being a sexual companion to humans. I continued to uncover him—it—whatever it was, and eventually had the thing more or less visible.

He was taller than me, dark hair and faint stubble on his angular jaw. That was a nice humanizing touch, giving him a five o clock shadow. His mouth was full, sexy, and his body was perfect. Not an ounce of fake fat anywhere. I’ll be honest; my cock stirred just looking at him. Fuck. It really had been too long when a manufactured piece of plastic could give me a woodie. I read the instructions and found a tiny flat pink circle under his arm. That was where I was supposed to attach the small charging disk that would activate him.

I stood for a good ten minutes, marveling at modern science, and sweating under my armpits while weighing whether or not this was a good idea. If I juiced the guy up I’d probably be stuck with him forever. It might be too hard to reject the poor thing once it started talking. Taking in his narrow hips and rippled abs, I couldn’t help but wonder what was under the smooth jean material that covered his crotch.

I swallowed hard, thinking about all the stories I’d heard about what exceptional lovers the XP30s were. I wiped my forehead and took a deep breath. Then I pressed the charging disk to the spot under his arm and stepped back. Nothing happened at first, and then I heard a faint buzzing sound and his eyes opened.

They were a brilliant green, sort of like that iridescent moss you sometimes find at night in swamps. He blinked a few times, and then met my gaze, which sent an odd thrill down my spine.

“I hope you don’t mind, but I’ve been in there a while and I need to pee.” His voice was husky, and the sound of it startled me.

“Oh, yes. Of course.” I moved aside hurriedly.

He grinned and it was beautiful, and warm. He even had dimples. That flash of perfection was not at all what I’d been expecting from a non-human smile. “I’m just teasing. I don’t actually urinate.”

My cheeks heated. “Oh, you’re one of those funny robots.”

First he nodded and then he frowned. “We prefer the term android. Robot seems so cold and unfriendly.” A little smile played around his mouth. “XP30s are very friendly.”

Cocking his head, he held out his hand. “I’m Sloot. It’s a weird name, I know. It’s made up of a combination of the letters from the compounds used to build me. They give us names because they think it makes us seem more humanlike.”

“But you aren’t human.” I wasn’t sure why I felt the need to say that. He felt human. His flesh was heated and firm as it gripped mine.

“We have most of the good qualities.”

Although I wasn’t positive I agreed with him, I didn’t really want to argue with a robot. “Can I get you anything?” I knew it was an odd thing to ask, but I wasn’t sure how to act around him.

“I wouldn’t mind if you showed me where your bedroom is.” He winked.

He tilted his head again, and his unusual green gaze was pinned intently on my face. “Aren’t you familiar with XP30s skills?” He arched one smooth eyebrow.

“Vaguely. I know you’re a sex bot. But I’m afraid I’m not up on my detailed robot knowledge. I’ve never had an android before.” Of course I was impressed with the advances made in the field of robotics, but I hadn’t felt the urge to own an android.

“Let’s see, you’re probably familiar with rescue bots, and worker bots. But I’m a different class. XP30s are designed solely for the sexual enjoyment of humans.” He leaned toward me when he said that, as if we were sharing a dirty secret.

“Right. I’ve heard some good things about you…XP30s, I mean.” It would have been hard for this moment to be more awkward.

He smiled politely. “We do what we can to please.”

Sounds good? When had I become a mumbling idiot?

“No. Not…not really,” I stammered.

“Would you want to have sex now?” He used the same tone he might have if he was offering to take my coat.

Inhaling sharply I took a step back. “God, no. I…I don’t even know you.”

He laughed, and then he realized I was serious. “No one has ever said that to me before. Give me a moment while I access the situation.” He touched his index finger to his temple and closed his eyes.

“I’m not like that. I don’t just have sex with people…or robots… I just met.” Beads of sweat gathered on my upper lip, and my heart was beating quickly.

“Please hold while I continue to access the situation.”

“Um, you know what?” I ran my hand over my head, feeling flustered. “This was a mistake. I should never have activated you.”

His eyes flew open and for the first time his cool composure slipped. He held out his hand and grimaced. “Don’t switch me off,” he pleaded. “You’re not responding as expected.”

“This is just too weird.”

I’d always pictured androids as emotionless, but he was practically wringing his hands with worry. “I apologize profusely. Most men are waiting naked, with full on erections when I exit the box.”

Perching on the arm of the nearest chair, I watched him warily. “I’m not like that.”

“It doesn’t usually matter. As I said most men…put me to work…um, right away.” He moved closer. “I should have been paying better attention to your signals. I’m really so sorry.”

I squinted at him. “Do you actually mean to tell me guys jump your bones the second they unwrap you?”

He grimaced. “One man actually fucked me when I was still inside the crate.”

Dropping his gaze to the ground he said softly, “It was rather unexpected.”

I crossed my arms, freaked out by the whole situation. This was so far out of my comfort zone I wasn’t sure what to do. “I don’t think this is for me.” I swallowed hard. “It’s nothing personal, but I’m afraid I’m going to have to return you.”

Wincing, he glanced back toward the crate, and his mouth drooped. “Please don’t make me go back in there.” He shivered. “Please.” 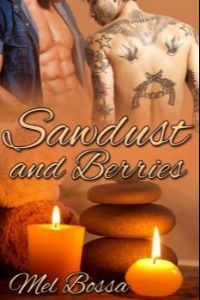