Even though she’s a couples therapist, Sabine is struggling to understand her romantic decisions. Why would anyone ditch a fantastic guy like her surgeon-boyfriend Thomas, after just one month of living with him? She has no good reason. But plenty of strong feelings. Worse still, she’s signing up with the 1Night Stand agency, which simply isn’t like her. She’s telling herself it’s just because she can—a way to mark a new beginning.

Sabine’s the anonymous lady in white Simon’s been told to meet at the Cape Point Castillo Resort at the tip of South Africa. Right alongside the ocean, where he nearly died. Simon’s amused Madame Eve hooked him up with a therapist. Because he sure has a lot to talk about. One look at gorgeous Sabine, and talking’s the last thing on his mind. He needs her to know him, so he comes up with a game plan.

In Sabine’s eyes he’s tall, dark and handsome and he’ll do nicely, but alarm bells start ringing when he doesn’t behave like your average one night stand date. Is she in danger? Can she trust this man in a raincoat, who entices her onto a windswept beach at night, or should she run a mile? Because something sinister’s going on. He’s injured. He knows her real name. And he didn’t come to the 1Night Stand service in the usual way. Right now he’s a survivor with one helluva story, and she’s a woman with a heap of unanswered questions.

Yet they’ve been brought together for a reason. And been told to stay for breakfast. What does Madame Eve know that they don’t? 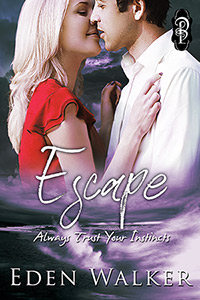