A love story through time.

The Nephilim's Promise: Eli is immortal. Almost immortal, anyway. His father is an archangel he never knew, while his mother was a human. When another angel asks him to save a human male in Ancient Egypt, his life is forever changed.

When Micha comes into his life, Eli is no longer alone, but Micha’s untimely death leads Eli to search for his eternal love through reincarnations of Micha over the centuries. Based on a medium’s tip, Eli finds Joshua Milbanks, eighteen years old and homeless, kicked out of his foster home because he is gay.

When Eli saves Joshua from a bullet, Joshua doesn’t know what to think, but he cannot deny he is drawn to Eli. Is Joshua Micha reincarnated? Or will Eli continue to be lonely without his eternal love?

The Last Nephilim: They say love is eternal. That’s what Eli believes in his heart and soul as he searches again for his reincarnated lover, Micha, who is now living as Adam, and happy in Mexico City.

This time, Eli has help looking for Micha. Micha's son, Josh, goes to Mexico City to track down his father. Eli and Josh struggle first just to find Adam, and then face a man who doesn’t remember -- or know -- either of them. At the same time, a menace from Micha and Eli's past resurfaces, and places their journey and their eternal lives in danger. Can true love overcome the remnants of evil that haunt Eli? 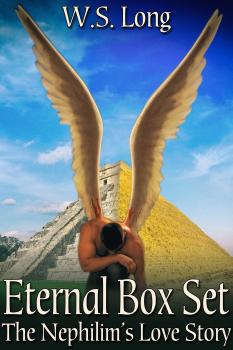 EXCERPT FROM "The Nephilim's Promise"

Eli sharpened his sword, over and over on both sides, double-checking to make sure the edge looked sharp. Sparks flew from the whetting stone as the bronze returned over and over. Perspiration gathered at the corner of his eye, which he wiped with his hand. Between the desert heat and the flames even Eli had to take steps to keep cool by removing his tunic and placing it to the side. He glanced over to the wall, where his shadows appeared. Darkness had surrounded the city. He spent an hour, toiling away to perfect this sword and an axe, all weapons he learned to use to protect himself. He had dusted off the two-wheeled spoke chariot parked on the side for their journey into the desert. He wished he didn’t have to carry any weapons but experience taught him that he had to always be prepared.

He grunted. He gave a list of items to Micha. Water to quench thirst. And beer, of course. Two horses to pull their light chariot. Some light arms for self-defense.

His mother made him swear that he would only fight to save himself or another. She claimed that his father insisted that he be raised with this value as well as to never eat the flesh or drink the blood of any animal.

To kill in cold blood or to engage in a war would invite the arrival of watchers or angels with the only weapon that could easily end his life. This weapon had many names but only one purpose: to defeat evil spirits or wayward Nephilim. He said the different names to himself.

Sword of the cherubim.

His drifting thoughts stopped. His keen sense of smell alerted him before he heard the soft steps on the gravel behind him.

“Hello, Micha,” he said in a low voice, without facing him.

“Eli, are we ready to go? I’ve got the horses, food, and supplies for a few days journey before we head out farther west.” He paused. “I’ll put the food in the chariot. They’re bringing the horses up in a few minutes.”

“Almost ready. I want to be sure we are safe so give me an hour.” Micha nodded, his face now inches away from Eli’s as Micha moved closer. Although they appeared close in age with Eli standing over half a body length over Micha, these were outward appearances.

Eli knew that Micha wouldn’t understand that precautions they had to take. Marauders roamed the countryside, outside the towns and villages. Only the large cities were safe. Attacks on caravans happened. It wasn’t always so but famine and poverty drove desperate men to drastic measures.

The fire flickering brought Eli back to his task at hand. Taking the sword in his hand, Eli inspected it then sheathed it. “Yes, an hour should be all that’s necessary.”

Micha bowed out of respect to Eli and Eli nodded in turn. Eli smiled inwardly.

I like him. He’s intelligent. Has confidence for someone unusual for his age. He’s also very attractive. Is that why Yusuf set this up?

Yusuf had introduced him to other women in the past but then he gave up after Eli showed no interest. Eli focused on his periodic duties of accompanying Yusuf when he left the city. Otherwise, his natural ability to construct things made him popular with Pharaoh’s chief engineer and architect who sought cheaper, faster ways to build the tomb pyramids.

Is this Yusuf’s way to make life less lonely for him?

Eli checked the inventory of figs, dates, and other dried food in the sack Micha had filled. He found beer in a clay jar and some water in a different skin. He would have to remind Micha to bring some honey and salt.

He approached the two-wheeled chariot, an invention that the Hyksos brought over from their northern ancestral home. The chariot had a loose bolt, which could come undone if they hit a rock on the road. The tool he needed was on the other side, more than twenty feet away from him. He looked around, confirmed he was alone, and he extended his arm out, willing the piece to him. The bar flew through the air based on his command then Eli grabbed it with his left hand and worked on the bolt.