Vic Braunson is a city bus driver who falls in love with Matt diLorenzo, a swimmer he meets at the gym. When they finally hook up, there's no denying the energy between them.

Something about Matt brings out the best in Vic -- literally. He gives Vic superhuman powers. Can they learn to live with these abilities without losing each other?

This box set continues the adventures in the super sexy, super powered world of Vic and Matt! Contains the stories:

Seventh Inning Stretch: When Vic and Matt face off on opposing teams in a charity ball game, Matt's afraid his lover's superhuman powers will give him an edge. He suggests they abstain from sex until after the game, but before long Matt discovers that keeping his hands to himself is easier said than done. And when the two teams face off against each other, he finds it almost impossible to keep his mind on the game.

Outage: Roxie drags Matt to a boring workshop on office admin. When a winter storm knocks out power to the city, they are trapped in an elevator downtown. Vic’s current superpower is an electromagnetic ability that will allow him to rescue the pair. But fallen power lines & the building’s concierge stymie Vic. Then there’s Roxie, who doesn’t yet know of Vic’s powers or how he gets them.

An Evening with the Rush Hour Hero: In the time Vic and Matt have been together, the powers have become such an integral part of Vic that he doesn't hesitate to use them when his help is needed. One evening on his way home from work, he witnesses a traffic accident that ties up the interstate and responds without thinking. But when Matt hears about the accident on the evening news, Vic has a lot of explaining to do.

Worst. Power. Ever.: Vic Braunson shares a very sexy secret with his lover, Matt diLorenzo -- something in Matt's semen gives Vic superhuman powers. While the powers fade over time, most of them come in handy. But every now and then, he draws a doozy ...

Santa Vic: Vic's boss asks him to don the Santa suit for the company's employee family Christmas dinner -- again. The kids love him. One little boy in particular wants to make sure Vic -- or rather, Santa Vic -- doesn't forget his sister, who's in the hospital for the holiday.

No Place Like Home: A tornado and washed out road take Matt on a detour he didn't expect -- unconscious in a ditch. When he comes to, he finds himself in the merry old Land of Oz. As he struggles to find his way home, Vic has a more pressing problem -- locating Matt. Can the two find each other before it's too late?

Abstinence Makes the Heart Grow Fonder: Vic and Matt’s tradition to abstain from sex for the week between Christmas and New Year's has Matt frustrated, to say the least. Can Matt make Vic change out the tradition for a new one that has them loving each other instead? Or will Vic insist on waiting until midnight rings in the new year before either man finds release? 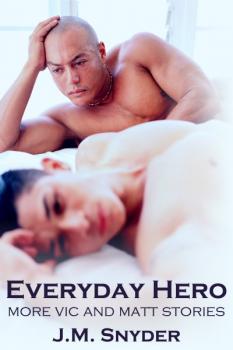 Matt was still sitting on the floor of the elevator, banging his head back against the wall in time with the mantra of his lover's name that scrolled through his thoughts, when he felt Vic's presence flood his mind. With a jerk, he sat up straight, his heart pounding in relief. "Vic?"

Across the small car, Roxie eyed him warily. "No," she said, cautious. "He's not here. You okay, Matt?"

He shook his head and closed his eyes to shut her out. ::Vic?:: he called out mentally. ::Oh God, Vic, we're stuck in an elevator and I'm about this close to losing it, I swear. I hate these things.::

The sensation of strong arms enveloped him, a psychic bear hug that chased away the fear that gnawed at the edges of his sanity. ::I'm on my way.:: Vic sounded so reasonable, so sure, that his confidence helped stave off Matt's anxiety. ::Where are you exactly?::

Matt didn't know. He tried to picture the office building they were in, but he hadn't seen very much of it while driving this morning -- he remembered a dark awning with a street number on it in ornate gold lettering, then he'd passed the building and drove into the underground garage. He wasn't even sure where he had parked now. Before panic could set in, Vic tamped that emotion down with his own psyche and asked, ::Is Roxie there? Does she know?::

"Hey Roxie." Matt roused himself to find her looking at him, distrustful. "Where are we?"

Her eyes narrowed as if she couldn't tell if he were being serious or not. "In an elevator," she said, speaking slowly. "Are you sure you're okay?"

"I mean ..." Matt sighed, exasperated. "The building. What building is this?"

With a frown, Roxie wanted to know, "Why?"

"Roxie!" Turning into himself, he told Vic, ::God, she's being deliberately mean today.::

::You did eventually.:: Matt felt his lover's smile warm him up inside. ::Hell, I found out myself anyway, and she's going to find out, too, when I ride in there like the cavalry. You might as well tell her. What's the worst that could happen?::