Exiled and driven by guilt and vengeance, Caleath, adept in virtual reality games, finds himself on a world where magic rules. Assassins hunt him, ghosts haunt his nights, a sorcerer covets his knowledge and a beautiful hostage complicates his escape.

Washed ashore from the wreck of the Albatross, tortured in mind and body, Caleath uses his dreaded nanobots in order to survive and reluctantly befriends the young Gwilt Their search for the survey satellite, which could lead Caleath home, unveils the terrifying world of 'a dark soul, black magic and a bloody sword'.

On this perilous journey, an assassin destroys Caleath's healing nanobots, and exiles from his home planet follow his every move. He takes the beautiful Nasith, of the Ferran clan, hostage to keep the assassins at bay, but her presence endangers him more. A sorcerer forces Caleath to aid the Council of Mages when he discovers Caleath carries vital knowledge that could save the Sharyac people from the invading Tarack, a species of giant ants. 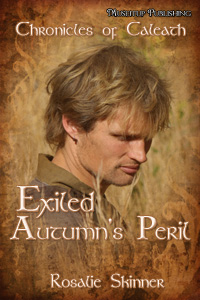 Exiled: Autumn’s Peril is the first book in Rosalie Skinners’s Chronicles of Caleath. So before you start reading this one, be aware that it’s highly addictive and will leave you craving the next book in the series. Autumn’s Peril weaves an intriguing tale where sci-fi meets fantasy. A planet still in its middle ages becomes the setting for a vicious real life game transmitted to an entertainment-craving audience spread through the federation of advanced worlds. Former Game Master and champion Caleath fights for his life in an archaic world, while the vengeful organizer tightens the net around him, not to mention an ignorant local mage getting in his way.Caleath is a nicely ambiguous character, not your foolhardy hero but a man fighting for survival while trying to preserve his humanity against all odds.Fast-paced and vividly written, the story takes unexpected twists that keep you turning the pages. Even though you find yourself on a roller coaster, you can always trust never to be thrown off. Lean back and enjoy the ride.

“Well three horses come this way. I can hold the assassin but the rest is up to you.”

“Adder’s spit, wizard! How long have you known?” Caleath spun as the first rider reached the edge of the clearing and threw himself off his horse.

The assassin took six strides across the clearing. He unsheathed a sword as he approached.

Caleath’s breath caught in his throat. The wizard raised his staff and the ranger froze mid step.

A strange miasma of white magic circled around the stationary ranger but whipped away from contact with Caleath when he sprinted toward the buckskin. Already a second ranger crossed to join his partner. His voice reached Caleath as he ran for the trees.

“What sorcery is this, Penwryt?” the ranger cried while he lifted his loaded crossbow and tracked Caleath’s movement with his aim. Caleath heard the wizard’s warning but when he turned to give heed, the crossbow bolt flew straight and true.

The quarrel struck Caleath’s arm with enough force to knock him off his feet. White pain blinded him for a split second. When he recovered his balance, Caleath saw another ranger supported by a slight companion standing between him and the buckskin. The ranger, whom he recognized as Lachlan, looked unwell. His companion helped him stand.

Behind him, Caleath heard the second ranger reload the crossbow. He cursed and grabbed Lachlan’s companion with his good arm. Needing a shield, Caleath slung Lachlan’s friend between himself and the bowman. When Lachlan started forward, Caleath struck the ranger in the chest. His boot heel knocked the ranger’s chest and disabled his attempt at heroism.

“Stay down,” Caleath warned while he dragged the ranger’s struggling companion to where Enigma waited. Hampered by an arm pulsing with fire and aware he remained a target, Caleath lifted the uncooperative hostage across his good shoulder.

Using the cloak and body of the hostage as a shield, Caleath hauled himself and his struggling burden onto the unsettled buckskin. Raw pain exploded through his body when he hit the saddle. The horse sprang forward. Heavy hooves churned damp earth and Enigma thundered into the forest.

As soon as the horse hit full gallop, Caleath gained his balance and swung his human shield around to balance face down across the stallion’s shoulders. When the kicking and screaming paused for a second, Caleath identified the pitch and ferocity of his captive’s efforts. In a heartbeat, he knew the awful truth. He held a female hostage.

“Adder’s spit!” His heart skipped a beat. He’d taken aboard more trouble than he needed.