Exiled: The Battle for Enderseer Hold

Azriel’s plans of endless domination are coming to fruition. Nasith’s care is her first priority as she persuades the Deathbringer to concede to her wishes. Each day he delays capitulation gives the forces allied against her another chance for victory. They face more than another season of winter warfare. An adversary from history swells the ranks of Azriel’s army. The people of Allorn must defeat a foe whose very touch is deadly as they face a witch who stands supreme. 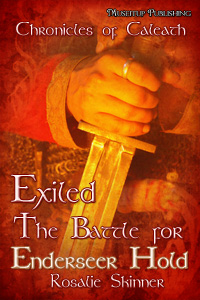 Exiled: The Battle for Enderseer Hold

...highly addictive and will leave you craving the next book in the series...weaves an intriguing tale where sci-fi meets fantasy. A planet still in its middle ages becomes the setting for a vicious real life game transmitted to an entertainment-craving audience spread through the federation of advanced worlds.

Corinne woke from a nightmare. She threw open the shutters and took a deep breath. Chill autumn air filled her lungs and brought her fully awake.

Roiling gray clouds rolled over the mountains in the east adding an aura of dark drama to dawn’s feeble light. The vision suited the dream she abandoned on waking.

Her head ached, but didn’t explain the dread making her heart race. With the Deathbringer in the Council’s care and the survivors from Valkerie’s Peak back among friends, Corinne’s frisson of fear seemed out of place.

Anxiety remained and forced her into action. Once dressed, she entered the corridor. Pale light ventured across aging floorboards and caressed the walls. Years of wear left a patina of smoke and grease on aging woodwork. Despite her wariness the building carried an air of familiarity and seemed to offer a feeling of safety.

Catching sight of her reflection in a glass Corinne tried to banish the frown that marred her visage. Her Kentorian marshal’s uniform contrasted with her unruly hair. With deliberate care to nurture optimism, she skipped downstairs and swung into the kitchen, where the cook removed baked loaves from a smoke stained oven.

“Good morrow, marshal.” The baker rubbed floured hands on his apron and greeted Corinne as she located a teapot steaming on the hob. She grabbed the kettle to pour boiling water into the pot, while the cook’s assistant broke a fresh bun from the cooling rack. The assistant supplied a pat of butter and cheese to accompany the simple fare.

“Thank you.” Corinne took the offering without enthusiasm. The cook turned reddened features away from the oven, as if he shared his guest’s disquiet.

“You’ve lost your appetite, my lady?” He took over the task of creating a perfect cup of tea from of the marshal’s forgetful hands. “Did you not sleep well?” He gave his assistant a nod of encouragement when the girl returned to preparing a basket of vegetables for a pot of soup.

“I slept badly. Terrible dreams. Is it obvious?” Corinne ran a brisk hand across her braid doing nothing to repair the damage lack of sleep wrought. She groaned, feeling the disarray of her singularly stubborn curls.

Accepting her tea and platter of food she forced a smile and made her way outside. Extra tables allowed outdoor dining, to accommodate additional mouths of refugees and Alliance troops.

A reluctant sun showed its face. Birds in full chorus spread their raucous message as the autumn morning developed. With skilled fingers, Corinne re-braided her hair. She settled back to sip her tea and enjoy the crusty bread. With deliberate care she planned her day. For now she would take the chance to learn more about Caleath. The presence of the Deathbringer intrigued her. Nasith’s change of attitude to the mercenary only added to the mystery behind Caleath’s character.

Despite appreciating the moment of quiet, Corinne’s mind wandered. Dark visions from her nightmare lurked in her mind. She tried to relegate her anxiety to memory, but before she succeeded, Travis and Eluart approached. Their countenance boded ill and they walked the empty street with a purposeful step.

The inkling of fear she sought to expel blossomed into dread. She sprang to her feet, crossing the road to intercept their progress.

Both man and Vergöttern saluted her with a deferential gesture. The object of their thoughts obviously remained elsewhere.

“Tell me what troubles you this morning?” Her discomfort linked with their concerns.

“Isadawn has further news from the Nomads, my lady.” Travis didn’t slow his pace. “Eluart and I are about to give your brother the latest information. We have informed the archimage. He is gathering the Council as we speak.”

Matching their strides, Corinne joined them. The lines of worry creasing the beautiful Vergöttern brow confirmed the dread growing in her gut.

Corinne entered Mykael’s room with a quick knock. He surprised her by being fully dressed, as if sleep evaded him too. His manner seemed tense but he smiled and greeted her with a warm embrace.

Corinne guided him to the study where the ranger and the Vergöttern lord waited. With a sigh, Mykael bade them take seats. She read anxiety in his mood when he organized his already tidy desk. After Corinne settled in an armchair, Mykael took a chair for himself.

Sunlight broke through the window to herald the start of the day’s activities outside the king’s room. The atmosphere generated within made normal activity sound like a cacophony of chaos.

“Please, speak freely.” Mykael straightened.
“The Nomad Awain reports from the east bank of the River Arrion. They have found the witch’s stronghold, sire.” Lord Eluart spoke without emotion, but his words made Corinne’s hair lift and goosebumps rise on her skin.