BOOK TWO IN THE CHRONICLES OF CALEATH SERIES

Alone, Caleath rides south to kill the Tarack queen in her dormant colony, and thus, ensure the safety of the people. His ‘kill or be killed’ mission is not altruistic. Although he justifies his motive, saving the people, gaining his own freedom and acceptance, deep within his soul he battles a yearning for Tarack stim crystal. However, a small child's plea for help dissolves Caleath's simple plan.

His new quest takes him on a desperate path traversed by bandits, dragons, bloody battles, danger, and death. No longer is Caleath alone.

Meanwhile Nasith travels south with Lachlan, Gwilt, and a band of soldiers prepared for the battle with the Tarack. As they travel, Gwilt voices his concern about the malevolence surrounding a newcomer to the group. Convinced his doubts have fallen on deaf ears, he remains alert and wary. His attitude leads to a confrontation from which neither he nor Nasith emerge unscathed.

Winter allows the people of Allorn time to prepare, while other nefarious schemes rise to destroy them. 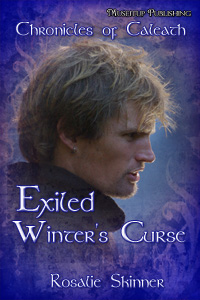 Caleath curled one gloved hand around the hilt of the Karadorian sword. His finger traced the outline of two missing jewels, used to purchase a pack horse and supplies before leaving Sheldarc. Cold leached through the fabric of the spare blanket draped around his shoulders as he tried to encourage sleep. Deep within the sheltered cowl of his hood, his eyes closed.

Caleath cocked his head to listen. Well beyond the horses resting with their tails to the wind, he heard a wolf’s howl disturb the quiet of the night. The baying stirred a well of loneliness. Gwilt and Nasith traveled elsewhere. They probably spent the cold, dismal night indoors, sleeping on warm beds with full bellies.

Thoughts of Nasith warmed Caleath’s blood, but he quelled them before they ruined his hope for sleep. He cherished the memory of moments spent in her company. They had been desperate moments. Survival dominated his thoughts then, preventing him from savoring her presence. Now assassins no longer hunted him, nor did ghosts haunt his nights. Nor did Nasith ride with him. He rode alone, south toward the growing threat, in a desperate quest to prove his worth to the old mage Penwryt.

With his chance of returning home destroyed, Caleath fought the despair of homesickness. Cold made his inner arm scar tissue ache. Anger warmed him, banishing thoughts of Nasith. Instead, rage focused on Ephraim, the man who manipulated Caleath’s exile. Although Ephraim managed to delay Caleath’s plans for revenge, they fermented even now. Left without galactic citizenship, or a means to get off the planet, Caleath cursed his enemy with every breath.

A taint of corruption carried on the cold night air.

Adrenaline pumped, boosting barriers within his mind. Caleath flinched. Sleep dulled the alarm, but instinct reacted to the touch of sorcery. Dragged from a dreamlike state, Caleath braced, rousing to repel the probing of another mind against the defenses inside his head.

His fingers clasped the Karadorian blade, already drawn beneath Caleath’s heavy cloak. Caution saw the sword bared against the threat of ice forming in the sheath and preventing the weapon’s release. Despite his precautions, the sword could not protect him from magic. The effort needed to prevent the persistent intrusion caused his heart to pound and his head to ache.

The barriers in his mind loomed as intangible walls, protecting the detritus of dark magic left by dire conjurations. The threat of incursion into the morass of unfathomed magic terrified Caleath. He recognized his feeble efforts, compared to the power ranged against him.

A trickle of dampness spreading along his spine became a river of cold sweat. Fully awake, Caleath trembled as he fought a silent battle against an invasive and invisible foe.

The horses shuffled, as if they too sensed the desperate conflict. Caleath didn’t open his eyes, his focus turned inward. Neither cold, nor the scent of corruption, nor the sudden quiet in the forest seemed important as he fought to keep his mind free from manipulation. He called upon all the ways and means of constructing and maintaining barriers, learnt during three years as the source for Karadorian dread lords.

Even so, his efforts seemed futile. Nothing he offered prevented the aggressive sorcery from broaching his wards.

He dragged cold air into his lungs, clamped his jaws shut, and clenched white-knuckled fists around the hilt of the sword. His sense of futility spread, though he refused to capitulate. He tasted blood, smelt bitter corruption and heard Death’s dark humor in the cascade of a nearby creek.

Between one heartbeat and the next, an explosion of burning flame rampaged behind Caleath’s eyelids. He gasped, opening his eyes when the image of a dragon rampart burned into his vision. He sensed a presence; human, insubstantial, but carrying dread potential. Before he could react to the awe-inspiring presence of the dragon, all three apparent threats; dragon, human, and the touch of sorcery dispersed. No longer under attack, Caleath shuddered.

Both horses snorted, shying as Caleath staggered to his feet. Blinded by the sudden light, it took another heartbeat before vision adjusted to the darkness before dawn. Caleath stumbled against Enigma’s flank, his sword flailing toward two unseen foes.

The forest remained quiet. A white owl winged silently into the gloom. No dragon or sorcerer disturbed the peaceful tableau.

“Balls of a hairy goat.” Caleath rammed the sword into its scabbard and tried to shake off the feeling of impending doom. He took time to settle his racing heart, fill his lungs with sweet air and relish his continued freedom.

In the distance the wolf yowled as the morning light crept across the forest floor. Shrugging off the cloak, Caleath adjusted his shirt where damp fabric chilled warm flesh. The cheerful chatter of crickets, birds greeting the dawn, and the innocent babbling brook mocked Caleath’s rank fear. Again thoughts of Gwilt and his wolf rose to provoke his loneliness. Cursing his penchant to dwell on their plight, Caleath savored a moment wondering how Nasith greeted the dawn.