When lust blindsides a Jersey gal, you know insanity of all kinds is bound to ensue.

Lauren Donovan assesses risk as her life’s work, but avoids it personally—until she reaches her thirty-fifth birthday, when she decides to spend a long weekend in Atlantic City.

Truman Madison gambles for a living, but has never taken a chance on love. When the two literally bump into each other, Lauren knows Tru is the perfect partner for acting out her number one fantasy: sex in the woods, with the exciting possibility of being caught in the act.

While they are having sex, an unknown person steals their clothing. They make the best of it by driving to Tru’s home, naked, where food, drink, and more passion ensue. However, someone interrupts their happy post-sex drowsiness by throwing a rock through a window and slashing Tru’s tires.

Next morning, back in Atlantic City, they make plans to have dinner that night. But a romantic tryst isn’t in the cards—circumstances require Lauren to endanger herself to save Tru’s life. Even so, she’s not ready to risk revealing her emotions, assuming that the two of them are only a fling. But Tru has a way of surprising her, and Lauren comes to realize that she can’t find love without exposing her feelings and risking her heart.

This five-blue-ribbons (Romantic Junkies) story, previously published by Amber Quill Press, is over the top the way that only a torrid, scary, and funny Jersey romance story could be. Go along with Lauren on her wild ride of scorching sex that turns into “Tru” love. After all, what’s not to like? 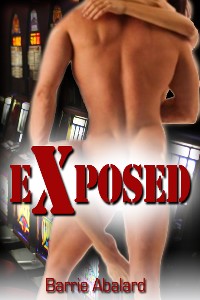 "Exposed gets off to a fast, freezing start, heats up quickly, and doesn't let up till the end... Exposed is really a fun read. Bring these two back for more!"

“It’s fuckin’ November,” I shot back. “Can’t we just disrobe the critical parts?”

He shook his head. “It won’t be as much fun if we don’t strip completely. The risk of discovery, you see. That’s what’s making you hot.”

His words and tone of speech had weirdly morphed him from a fuckin’ Joiseyite into a college professor. I opened my mouth to protest, but his hand vanished under my sweater again, this time under my bra. His thumb brushed lightly across my erect nipple. I shivered, and not from the cold.

“Trust Professor Madison,” he said, as if he had read my mind. “I, too, know a little something about risk management. But I know even more about the thrill of risk. And our risk of being discovered here isn’t huge. However, the thrill payoff is huge—if we strip.”

He kissed me again before pushing up my sweater and pulling my breasts out of my bra. His mouth did things to them that are probably illegal in Alabama and Arkansas. It sure as hell felt illegal, judging from the tremors that were shooting straight to my pussy. My hands unbuckled his belt and unzipped his khakis. The erection my fingers found promised a rollicking time.

He took his lips and tongue off my nipples. “C’mon, you said you wanted to do it in the woods. Let’s go.”

He grabbed my hand, and I followed him, crawling right over the gearshift and the driver’s seat. Seemed I would follow this man anywhere for a fuck.

While we stood next to the car in a pile of pine needles, he stripped me, but told me to put my shoes back on. I did so. I no longer had a mind of my own, not while my hormones were within sniffing distance of Tru. He tossed his own clothing on top of mine, took my hand, and tugged me into the woods. I was amazed that I didn’t feel chilled—such was the fever this man caused inside me. The woods weren’t too dark—a full moon guided us to a small clearing—and its silvery beams made the man I was with appear dangerous, a creature of the night, over a head taller than me and build like Hercules. The woods’ smell was sharp evergreen mixed with smoke, and when he kissed me, I smelled a hint of ocean overlaid with the tang of musky male.

“Raise your arms,” he said, and when I did, he lifted me. “Grab those branches over your head.”

I figured I’d play along, but I warned him, “I’m not strong enough to hang by my arms for long, if you’ve got some exotic position in mind.”

His response was to get under me, place my thighs on his shoulders, and lift me higher.

“Keep your balance as best you can,” he said before he leaned me against the tree. Then he licked and sucked me in ways I knew for certain were illegal in thirty-six states. I gripped the tree limbs to keep from resting all my weight on him, but from the looks of his godlike build, I don’t think I was much of a strain for him, not even with the extra fifteen pounds I’d been trying to lose without success.

He invaded me with his tongue before fluttering it over my clit, which made me wrap my legs around his head.

Once the waves of pleasure receded, I began to worry. “I didn’t break your neck with my legs, did I?”

He laughed out loud. “Let go of the tree.” He slid me toward the ground—later, I’d find scratches from the bark on my back—until my pussy was in line with his cock…

For the Love of Anna (MFMM)
Dixie Lynn Dwyer
In Shelf
$1.99
Tweets by
sirenbookstrand