Eyes to Die For

Explosives expert Dorn Wheeler’s security assignment to Amman, Jordan wasn’t expected to be anything beyond routine. That is until Haneen, a temptress who seems to think defying death is the ultimate aphrodisiac, enters his life. Dorn is soon entranced by the woman’s mystery and seductive spirit, and his thoughts fill with the fantasy of her body melding with his in the desert moonlight. What he doesn’t know is that the exotic eyes he wants to swim in may well be the planned death of him. Or that the one thing he can’t walk away from, a bomb like no one has seen before, hasn’t just been built, but is waiting for him…and ticking. 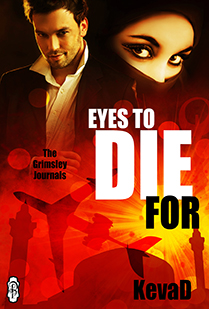 Eyes to Die For

The woman clad in a sand tan uniform turned her back to Dorn and strode away, her shoes clacking a steady beat on the rectangular hall’s tile floor. He eyed the firmness of her ass, the cheeks caressing the material sliding over the round mounds. The Jordanian guards took a position at the shoulder of each of the four members of the 3rd Ordnance Detachment (EOD) based out of Augsburg, Germany.

“What do you think they want?” 2nd Lieutenant Grimsley whispered.

Dorn exhaled a frustrated sigh. Grimsley, fresh out of school with the original sheen still on his brass lieutenant’s bars, had the makings for a solid commander, but he had yet to tap into his self-confidence vault. “My guess would be to go with them.” He raised a brow and took a step. “Shall we?”

On a military base, rank mattered. Out here, where a sneeze atop a package bomb could blow your guts all over the walls, skill took charge. Dorn hadn’t served in Nam, yet even those vets who’d been in the shit gave up their barstools for him. In the world of munitions and explosives, there was good, best, and Dorn.

Grimsley straightened to his full height of six gangly feet, adjusting his navy blue shoulder bag over his mint green polyester leisure suit jacket. “Follow me,” he proclaimed in what he apparently believed to be a tone of leadership, though it sounded more like a teen jerking his way through puberty.

Bat and Ball rolled their eyes in response, and trudged after the LT. The guardsmen matched the soldiers’ strides step for step. At the end of the hall, the woman held the door open, one hand still on her pistol grip.

The rise and fall of small breasts held tight and near flat under the uniform blouse captured Dorn’s interest. Her shoulders were square, probably from extreme exercise. Long sleeves hid any hint of muscle tone, but her neck…. He sucked a breath. She had a thoroughbred throat, sleek and firm with satin skin two shades darker than a sun worshipper’s. A razor sharp jaw line curved to an angular chin. High cheekbones supported eyes held within a slanted suggestion of the ancient Orient under thick brows from which a slender nose sloped to a droop above her upper lip. Ebony hair had been drawn to a back bun. A garrison cap crowned the hourglass vision.

KevaD is David “DA” Kentner, prize-winning author and writer of the nationally syndicated column “The Readers’ Writers.” This husband, father, and grandfather is a retired police chief and army veteran. His short story “The Caretaker” won first place in Calliope magazine’s 18th annual fiction contest. David currently has eleven published books and resides on five acres outside of Freeport, IL. When not writing, mowing the lawn, or shoveling snow, he’s trying to convince his wife the TV has more than soap opera and game channels, and that pizza really is a required food group.

Kentner served with the U.S. Army’s 3rd Ordnance Detachment (EOD), an army bomb disposal squad, from 1975 to 1978. His duties included assisting the Secret Service and State Department in the personal protection of the president, vice president, and secretary of state while on foreign soil. “Eyes to Die For” is loosely based on one such mission Kentner participated in.