James Rockton is ready to die. In fact, he plans on it. Having lost his life partner to AIDS, he books the South Pacific cruise Richard didn't live to share. James will spread Richard's ashes at sea, and then slip overboard to join him forever. He’s too old and too heartbroken to continue on alone.

But James doesn’t count on meeting a young man whose parents constantly put him down. Then there’s the obviously gay young art dealer who ogles a crazy young photographer traveling with an older gay man about James’s own age named Herb.

James and Herb begin spending time together, trying not to laugh too hard or get too involved with these young men, who circle each other in rapidly shrinking orbits. After all, James and Herb are old, with gray hair and less stamina. With time, talk, and martinis, will love manage to find them, too? 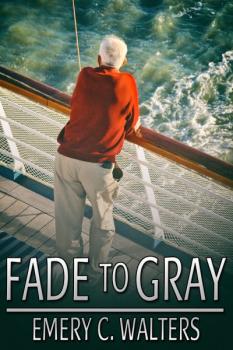 I finally met Herb, Eric's roommate. We ended up sitting next to each other for two hours, waiting for our tender tickets to be called. There was some fuck-up with the tendering into port today. So, of course, we got to talking. It turns out we had at least one thing in common.

Remember way back before I met you? I worked several summers during college as a gigolo, er, I mean, dance partner, on the cruise ships. Mostly they were just Fort Lauderdale to the Caribbean, but the old ladies all had been practicing dance lessons for weeks before the cruise. Some of us young bucks were actually paid to stand around, look charming, and dance with the old broads, dear old dolls as my father used to call them, and make sure the gals had a good time. They sure did. They were always pressing cash into our hands or pockets, pinching our heinies, and trying to get us to walk them to their cabins. It was a great time because between all the bored husbands and the other crew members, I was getting all the sex I could want.

Well, Herb laughed and then said, "I was a piano player on those cruises and very often played for those tea dances. The tip jar on the piano was overflowing every single night. It put me through college, actually! I wonder if we ever met each other?"

"Met each other," I said back. "We may have even slept together! So," I ventured as carefully as I could. "Are you and Eric, you know, a thing?"

Herb stared at me and laughed. "Are you kidding? That's never gonna happen. He's the most immature young man I've ever met. Funny as hell, though, and if I wanted, I could have him or any of the boyfriends of the guys he picks up, but they're all so young. I'm HIV Pos, so I keep my distance. Eric doesn't care how old or young a guy is, and I don't want to worry about whether or not they're of age. They're all so beautiful when they're kids, though, aren't they? And by kids, I mean anything up to the age of thirty!"

I had to laugh at that.

"And all they want to do is bang. Eric's good to travel with, though, always pays his way, and sometimes even treats. He'll be an imp and introduce me as his coworker, or his father, uncle, or even Daddy sometimes and shoot me such an I dare you grin. I can't help but laugh and usually play along."

He blushed, and then looked up directly at me. His eyes were gorgeous.

I decided to share something I wasn't used to saying. "I'm also pos."

So, later, I was walking around deck six, AKA the hiking trail, and came to rest at the aft end, leaning against a stanchion. Next to that was a life ring. The thought came to me. Here is a good place to go over, and if you take the life ring and change your mind, you can tell people you thought you saw someone else fall over and went in to save them. That would work, right? Listen to me. I'm so sorry, Richard. I have not forgotten you and could never replace you, but ... still. The fact remains, I am still here. Perhaps ... well. Especially back in one's cabin, in the night, alone, with nobody beside them in the bed. I place the largest pillow there and pretend it's you, but my heart knows the truth.