Dell Blackfeather has spent the last five years in prison for a crime he didn't commit. When new evidence is found and he's freed, all he wants is to leave Montana and his past far behind.

Alison tried to be the perfect wife until the day she came home to find her husband in their bed with another woman. Left with little but some clothes and her car, she strikes out to start a new life somewhere far away.

Neither one is looking for a relationship when they're thrown together. The attraction they have for each other is strong, but can it survive their pasts? Or the serial killer stalking them through the deserts of the Southwest? 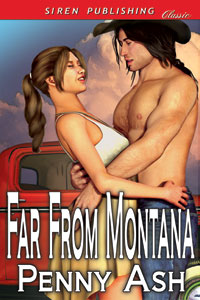 5 DELIGHTFUL DIVAS: "Dell is an innocent man. The new evidence clears him and he’s finally set free. With nowhere to go, he decides to leave town and start a whole new life. As he’s headed out of town, he stops to offer help to a stranded motorist when he sees the smoking car. Alison was in the midst of leaving her sorry-excuse-for-a-husband behind, when her car broke down. As she got out of the car, it exploded and threw her to the ground. The next thing she knew, the handsome cowboy she saw at the gas station came to her aid. Dell offers Alison a ride and they become fast friends. The adventure and mystery in Far From Montana knock the interest level up a few notches to go with the sweet romance of the story. Dell soon realizes the man who should have been in jail instead of him is stalking them. Dell is a very romantic hero for Alison, even though he doesn’t think he does enough to protect her. They quickly learn to depend on one another and the trust and love soon become evident. I think Ms. Ash keeps the interest up with the drama of Far From Montana and the sexual content is a much appreciated bonus to the story. The combination makes for an exciting read you won’t want to put down. Far From Montana is the perfect story…romance, mystery, drama and sex. It’s not too long, not too short, easy to read, and you know…the sex is hot, hot, hot!" -- Shelly, Dark Divas Reviews

4.5 TEACUPS: "Far from Montana is a GREAT romantic comedy. It’s refreshing to find a book with a believable story-line, and this one fits the bill. The flirting between Dell and Alison is laced with humor, and I couldn’t help myself from smiling throughout the book. The love scenes had a twist that I found refreshing. I look forward to reading more from this author." -- Janet, Happily Ever After Reviews

Alison slid her arms around him, clenching her fists in his blue plaid shirt. Her body against his felt like standing in front of a bonfire, her heat soaking through him. He sucked gently on her lower lip, tugging lightly then plundering her mouth again, running the tip of his tongue over the inside of her lips before slowly twining with her tongue.

She pushed him back, gently breaking the kiss, pulling his shirt out of his faded jeans. She unfastened each pearly snap then slid her hands slowly up over his chest. He let go of her just long enough to toss the shirt aside. He pulled her back against him wrapping his arms around her, molding her to his body.

Alison tilted her head up. He lowered his mouth to hers once more. The hardness of her nipples surrounded by the softness of her breasts pressed into his chest sent a jolt straight to his burgeoning erection. His cock throbbed against the fly of his jeans.

“It’s been awhile, baby. I don’t know how long I’ll last,” he said urgently between kisses.

“It’s okay. We have all night,” she answered, her soft voice thick with lust.

He reached between them with one hand, unbuttoning his jeans then lowering the zipper. She stepped back. A soft sound of disappointment escaped him at the loss of her body against him. He groaned when she pushed his jeans, along with his boxers, down over his hips, freeing his cock.

He kicked the clothes off as he sat back on the bed, moving his hands over her waist. He slid them up to cup her breasts. She leaned into his touch, pausing to reach for a condom from the nightstand. He moved his hands to her waist again, leaning forward to touch the tip of his tongue to one taut nipple. Dell licked it before closing his mouth over it, kneading and probing gently. She moaned. Dell chuckled with male satisfaction.

“Been awhile for you too, huh?” He moved his lips against her skin. Fuck she tasted good, he thought.

She nodded, swallowing hard. “Uh huh, too long.” She opened the condom wrapper.

Dell lay back, pulling her with him. She knelt over him. “Let me put this on,” she whispered.

Alison rolled the latex over his cock, her fingers caressing and exploring, making him ache.

“Baby, not too much.” Her hands stilled. He fought to catch his breath.

He gasped as she moved over him, lowering herself onto his erection. Skimming his hands over her hips, wrapping one arm around her waist, he pulled her down against him. Slowly arching his hips up off the bed, he pushed deeper into her. She moaned, tightening her grip on his shoulders. He whispered her name as he rolled over with her.

Dell began to move his hips in slow thrusts into her wet heat. She arched her back, answering him with her own movements. He groaned when she slid her feet up the back of his legs. She wrapped her legs around him. "Ohh girl..." Dell closed his eyes, moving harder.

Alison moaned, digging her fingers into his hips. He tried to slow down. He didn't want to come before she did. He found her clit with his thumb. She whimpered when he pressed it. With a breathless chuckle, he rubbed his thumb over her clit. She cried out, rippling around him as she came. Dell held her while she rode out her orgasm. Tightening her legs, she rocked against him, drawing another deep groan from him. He braced himself on his elbows looking down into her eyes. "You're beautiful when you come," he whispered when she began to relax. She pulled his full weight down on her as he slid his arms under her shoulders.

"You didn't—" He cut her off, covering her mouth with his and twining his tongue with hers.

He broke the kiss, changing his angle to plunge deeper into her. "I'm close, sweetheart. So close." He groaned. "Need...harder."

She nodded. "Harder, yes, anything."