Here you'll find a romantic Valentine's story for the ages, and a timeless spiritual journey. Bill, a down-on-his-luck human, discovers Anna, an even more down-on-her-luck fembot, propped up in the corner of a secondhand store. Striking a deal with the shop owner to rescue her before she is sold and broken up for the value of her parts is the beginning of a relationship that will bridge centuries, lifetimes, political upheavals, and future forms of interpersonal relationships.

WARNINGS: This title contains humans and robots in a wide variety of sexual situations, including bi-gendered bot, oral situations and same-sex relations. 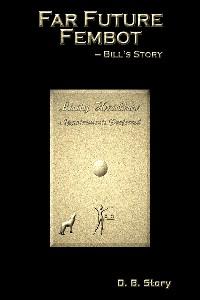 There was no way to fully describe just how sad the little sex-bot looked standing there in the dusty window of the second-hand store. Propped up against a box in the corner, it was clear she wasn't even running in low -- power suspend mode that would have allowed her to maintain her balance while her higher functions were shut down. Her face was frozen in a forlorn expression that clearly said her final thought had been of being turned off for the last time, never to be activated again. Her hands were held out in front of her, as if interrupted in the process of coming together in the universal symbol of prayer -- or maybe just pleading. Her tattered skirt showed that little money or effort had been spent in maintaining her appearance, which probably extended to the rest of her systems as well. Her eyelids had automatically closed to protect her delicate vision sensors -- although why bother protecting them now was probably her last secret.

Bill walked past the store each morning on his way to catch the bus to work. It was often dark when he passed the other way returning home once more. This wasn't one of the regular used robot emporiums, where 'bots were refurbished and presented as the next best thing to new for those who couldn't yet afford new for themselves. It was more a general junk store. A place where probably at least one example of everything that has ever been sold second-hand had passed through during its existence on this spot. How the little sex toy came to be there was just one of mysteries of life that might never be answered.

Bill couldn't afford a robot. Even a well used one on her last legs. His tiny apartment, and the fact he rode three different busses to and from work each day, bespoke too well of his own meager circumstances. Times were tough right now. He'd arrived in the city alone, with the promise of a job that evaporated at the moment of his advent. Without money to move on he took what he could find while trying to make ends meet. Although beyond even his dreams, the robot girl tugged at his heart every time he saw her. Her circumstances were certainly as poor as his own.

Over time he came to see her as a kindred spirit. Though her frozen expression never changed, he wondered how her face might light up when she was happy? What color her eyes would be when she opened them? What her voice would sound like when she had something nice to say? What her smile would be like when she was activated once more to realize that someone wanted her again?

Bill wondered about her name, until one morning he heard someone looking in the window comment that she looked like an old Anna model. That seemed a nice name that fit her well.

After that, when no one was nearby as he passed, Bill found himself in the habit of saying, "Good morning, Anna." Or, "How's it going today, Anna?" Or, "You look especially good today, Anna," though she always looked exactly the same.

Anna, of course, never smiled, replied, or otherwise took notice of his courtesies, but Bill realized it made him feel better, so some good did come out of it all. In the meantime he worked all the harder, believing that a vaguely hinted at promotion would come along any time now.

One evening Anna was gone -- her space empty as Bill passed by -- and the store dark. Although he rushed to the window and wiped off the grime to look into the darkened store, he couldn't see her anywhere. He recklessly pounded first on the glass, and then the door, but the store was closed and nobody responded.

The next morning Bill was there the moment of its opening.

"Where is she? What have you done with her?" His urgent questions peppered Samuel, the bemused shop owner.

"Slow down, young man. Just whom are you speaking of?"

"Who's Anna?" came the calming reply.

"The girl! The girl in the window! She's gone!"

"Yes! What happened to her?"

"I moved her over there," he said, nodding towards the back of the store. "I needed the box she was leaning against for another customer."

"Oh," Bill replied, now seeing her standing propped up in the back corner of the shop. The energy that had propelled him since last night now drained completely out of him. His head dropped and his shoulders sank back to their usual stance. After taking another look to ensure she was -- if not okay -- at least unchanged, Bill silently turned to leave again.

"Just a moment," the shop owner called after him, recognizing something in Bill's behavior. "Why does she matter to you so much?"

"It's nothing really," Bill mumbled, not turning around to face him. "I just wanted her to go to a good home. Everyone deserves a good home."

Bill had stopped walking towards the shop door. That gave the owner a moment longer to contemplate the young man.

"That's not likely," the owner finally said. "And it's a shame too."

"Why?" Bill exclaimed, turning back to face the elder man.

"She's an older model. Just about obsolete now. I'll probably end up selling her to someone who needs a spare part or two for another 'bot."

Bill's face said it all.

"You don't have any money, do you." It was not a question.

"No," Bill mumbled in reply, turning to leave again.

The owner almost let him complete the turn before saying offhandedly, as if merely discussing today's weather, "I'm getting a bit old myself these days. There are times I could use some extra help around here."

Bill froze, then turned back around slowly to see the older man smiling gently at him.

"We'll have to see how it works out," Samuel continued. "But you look like you're willing to work hard."

They struck a deal on the spot where Bill would come in and work, starting with cleanup tasks, an hour each weekday, and all day Saturday when heavy things were most likely to need moving.

Bill kept his other job and just subtracted these extra work hours out of his life. It wasn't like he had much to do otherwise. He already got most of his joy from walks in the park and visiting the museums and art galleries on the day of the month when they offered free admission. He still had his Sundays for those activities.

Bill kept the store spotless, and carefully dusted off Anna each day. Although she remained in the store she was now clearly marked "Not For Sale". Bill still greeted her each day when he thought no one was watching, while she remained unmoving.