After Felicity's groom ran off with her husband, the last thing she needs is the series of unfortunate riding incidents that befall her at a local horse show. So many things go so badly wrong in full view of all her friends ... and her enemies, including the foul Caroline Smigean-Smythe, local reporter, who will take full advantage of the situation to make Felicity’s life even more embarrassing.

But when a handsome stranger steps in to lend a hand, who’ll have the last laugh? 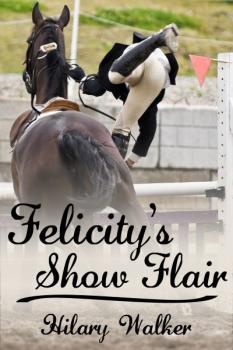 For a few seconds I had an upside-down view of the stadium’s show jumps from between Crusader’s hooves. Underneath his tummy and without reins, I was still in the saddle and clung on grimly with my calves. When the starter bell had sounded and we turned the corner to the first fence, the saddle had slipped round -- with me in it.

Feeling I wasn’t in the correct jumping position, Crusader braked sharply in front of the fence and propelled my whole body through his front legs. I flew between the top and bottom rails of the obstacle and landed on my back. Glaring sunlight stung my eyes. Quickly the blaze was shadowed by snorting equine nostrils as Crusader’s head reached over the refused showjump from the take-off side, checking to see if I was okay. I reached up to stroke his anxious muzzle. An aroma of horse sweat hovered in the August heat like a swarm of odorous bees.

Winded, I gasped, “What happened?”

Those two words convinced Crusader he needn’t worry about me any more and he nuzzled my pockets for tidbits. His powerful neck knocked down the pole it was leaning over, which fell with a loud clatter, missing my head by inches. Unperturbed, he realized the treats were now more accessible. I was perturbed, desperate to make a hasty retreat. I didn’t have time to undo the girth and resaddle my horse -- the next competitor was chafing at the entrance. So we left the arena in disgrace, saddle hanging underneath Crusader’s belly, not having jumped even the first obstacle.

The loudspeaker crackled, “Felicity Applewaite and Crusader wisely retire. I’m sure Felicity will check her girth before the next class.”

A loud snigger escaped hateful Caroline Smidgean-Smythe, who for sure was focusing her zoom lens on the stirrups dangling from my horse’s midriff. She’s had it in for me ever since I bought Crusader from under her nose. Everyone knew Lord and Lady Ewesbutt were strapped for cash. They couldn’t resist the extra five hundred pounds I offered for the beautiful bay gelding.

Being the sports reporter for our local paper, the Much Middlesteeple Gazette, Carrie’s moment of revenge had arrived. I just knew she’d taken humiliating shots of me out there with the horse she felt I didn’t deserve. I could already see blown-up photos in the “Much Ado about Sporting” section of Monday’s edition, with some withering caption like Fateful Felicity is Infelicitous. Boy, she was going to have a field day!

Seething, I gave her a disdainful glance and walked Crusader to my trailer where I tied him to the side next to his haynet. My Great Dane Blue was on a long leash attached to the trailer hitch and gave a yelp of joy as I came into view. I patted his massive head, mentally sifting the events which led to my tumble. I now remembered loosening my girth after popping some practice fences and failing to rebuckle it before going into the ring. No wonder it swung under poor Crusader as we rounded the first corner!

The girth lay across his back where it didn’t belong. I undid it and the saddle dropped from under his stomach to the ground with a resounding thud. The bay jumped back in fright, breaking his tether. Blue barked loudly, causing my horse to gallop off in the direction of the refreshment tent and threaten to bulldoze through it. I couldn’t believe it! All I needed now was for that miserable reporter to spot Crusader and take another beastly photo. Forget the sports section; it would make the front page headlines. Felicity Falls Foul of the Law -- Uncontrolled New Horse Kills Diners in Death Dance at Local Show.