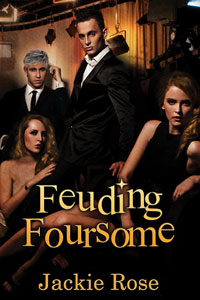 “Will you turn off that boring program?” cried Cunning Linguist—not her real name, of course. “I am tired of listening to those four arguing with each other every Sunday morning.”

“It is not boring at all,” responded Pussy Wett—not her real name, either. She kept a firm grip on the remote control as she lay at Cunning’s right side on the big fourposter bed.

“She’s right, Cunning,” agreed Peter Bigg—not his real name, needless to say. Looking up from the pillow while he kept clutching Cunning’s left hand, he demanded, “Didn’t you see that cat fight and karate-boxing match?”

“Yeah, until the crew killed the camera and then probably pulled them apart, before any real damage had been done,” Cunning replied. “And that came after they had put everyone to sleep, by talking about ménages a trois and quatre. Everyone knows about them.”

“Only everyone we have ever met,” pointed out Dick Long—and need you even ask if that was his real name? “For all the vanillas, it’s pretty racy stuff. Especially since everyone knows that those four so-called news commentators are in a ménage themselves.”

“Really?” Cunning sat up, the better to see the screen. “Now that isn’t boring at all.”

“Too bad we can’t watch them doing it, instead of just talking about it,” Peter replied, with a sigh.

“Who says we can’t?” Dick demanded eagerly, sitting up in turn. “I mean, who says that the public can’t watch us doing it in their place?”

“All right, fine…’porn’ or ‘adult’ or whatever you want to call it. Anyway, everyone is tired of

seeing our sexy versions of old-time bedtime stories, like ‘Sin-derella’ or ‘Snow White and the Seven Studs’ or “Phallus in Wonderland” or “Little Red Riding Crop.” This would be something new and different. We could do all kinds of exciting things…”

“Not if we do it as a parody, Pussy,” he retorted. “The Supreme Court ruled that way. Our lawyer told us so, remember? And anyway, do you think that high-class people like Stuyvesant van Aark are going to admit that they even know we exist?

“And we do sort of look like them,” he added, with even more enthusiasm. “You two girls both have long blond hair, just like Cassandra Bailey and Nikki Turner. I have dark straight hair, like Buck Patrick, and I could get a really bad haircut, like his. Peter could dye his hair white and hire a really good stylist, so everyone would know he was supposed to be Stuyvesant van Aark.”

“I suppose you’ve thought of a name for our new show,” Pussy asked, trying to hide her growing interest.”

And that, as all four had to agree, would not be boring at all.